Samuel Huntington (July 16, 1731 [O.S. July 5, 1731] – January 5, 1796) was a jurist, statesman, and Patriot in the American Revolution from Connecticut. As a delegate to the Continental Congress, he signed the Declaration of Independence and the Articles of Confederation. He also served as President of the Continental Congress from 1779 to 1781, President of the United States in Congress Assembled in 1781, chief justice of the Connecticut Supreme Court from 1784 to 1785, and the 18th Governor of Connecticut from 1786 until his death. 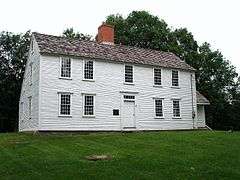 The house where Samuel was born in Scotland, CT

Samuel was born to Nathaniel and Mehetabel Huntington on July 16,[1][2] 1731 in Windham, Connecticut (his birthplace is now in Scotland, Connecticut, which broke off from Windham in 1857). His house is now currently accessible off of Route 14. He was the fourth of ten children, but the oldest son. He had a limited education in the common schools, then was self-educated. When Samuel was 16 he was apprenticed to a cooper, but also continued to help his father on the farm. His education came from the library of Rev. Ebenezer Devotion and books borrowed from local lawyers.

In 1754 Samuel was admitted to the bar, and moved to Norwich, Connecticut to begin practicing law. He married Martha Devotion (Ebenezer's daughter) in 1761. They remained together until her death in 1794. While the couple would not have children, when his brother (Rev. Joseph Huntington) died they adopted their nephew and niece. They raised Samuel H. Huntington and Frances as their own.

After brief service as a selectman, Huntington began his political career in earnest in 1764 when Norwich sent him as one of their representatives to the lower house of the Connecticut Assembly. He continued to be returned to that office each year until 1774. In 1775 he was elected to the upper house, the Governor's Council, where he was reelected until 1784.[3] In addition to serving in the legislature, he was appointed King's attorney for Connecticut in 1768 and in 1773 was appointed to the colony's supreme court, then known as the Supreme Court of Errors. He was chief justice of the Superior Court from 1784 until 1787.[3][4]

Huntington was an outspoken critic of the Coercive Acts of the British Parliament. As a result, the assembly elected him in October 1775 to become one of their delegates to the Second Continental Congress. In January 1776 he took his place with Roger Sherman and Oliver Wolcott as the Connecticut delegation in Philadelphia. He voted for and signed the Declaration of Independence and the Articles of Confederation. He suffered from an attack of smallpox while in Congress.[3]

While not known for extensive learning or brilliant speech, Huntington's steady hard work and unfailing calm manner earned him the respect of his fellow delegates. As a result, when John Jay left to become minister to Spain, Huntington was elected to succeed him as President of the Continental Congress on September 28, 1779. The President of Congress was a mostly ceremonial position with no real authority, but the office did require Huntington to handle a good deal of correspondence and sign official documents.[5] He spent his time as president urging the states and their legislatures to support the levies for men, supplies, and money needed to fight the Revolutionary War. The Articles of Confederation were finally ratified during his term.

Huntington remained as President of Congress until July 9, 1781, when ill health forced him to resign and return to Connecticut. In 1782, Connecticut again named him as a delegate, but his health and judicial duties kept him from accepting. He returned to the Congress as a delegate for the 1783 session to see the success of the revolution embodied in the Treaty of Paris.

In 1785 he built his mansion house just off the Norwichtown Green at what is now 34 East Town Street and the current headquarters of United and Community Family Services, Inc.

In 1785 he was elected as Lieutenant Governor for Connecticut, serving with Governor Matthew Griswold.[4] In 1786 he followed Griswold as Governor of Connecticut.[4] He remained in charge of the Supreme Court during his tenure as Lieutenant Governor but vacated that position upon election to Governor.[4] He was reelected Governor annually until his death in 1796. That same year, in a reprise of his efforts in Congress, he brokered the Treaty of Hartford that resolved western land claims between New York and Massachusetts. The following year he lent his support to the Northwest Ordinance that completed the national resolution of these issues.

In 1788 he presided over the Connecticut Convention that was called to ratify the United States Constitution. In later years he saw the transition of Connecticut into a U.S. State. He resolved the issue of a permanent state capital at Hartford and oversaw the construction of the state house. He died while in office, at his home in Norwich on January 5, 1796. His tomb, which was extensively restored and renovated in a 2003 project, is located in the Old Norwichtown Cemetery behind his mansion house. Both Samuel and his wife Martha's remains were disinterred during the course of the project and then reinterred in a formal ceremony on November 23, 2003.

Huntington, Connecticut, was named in his honor in 1789, but later renamed to Shelton, when that town incorporated with Shelton to form a city in 1919.[6] He is the namesake of Huntington County, Indiana.[7] Huntington Mills is a small town in northeastern Pennsylvania which also derives its name in honor of Samuel Huntington.

The home that Samuel was born in was built by his father, Nathaniel, around 1732 and still stands. The area is now within the borders of the town of Scotland, Connecticut. In 1994 the home and some grounds were purchased by a local historic trust. As of 2003 restoration is underway, but parts of the home and grounds are open to visitors at limited times. The Samuel Huntington Birthplace is a National Historic Landmark.

His nephew and adopted son Samuel H. Huntington moved to the Ohio country that he had been instrumental in opening up, and later became the third Governor of Ohio.