The Merry Maidens at St Buryan

There is much traditional folklore in Cornwall, often tales of giants, mermaids, Bucca, piskies or the 'pobel vean' (little people.) These are still popular today, with many events hosting a 'droll teller'[1] to tell the stories: such myths and stories have found much publishing success, particularly in children's books. The fairy tale Jack the Giant Killer takes place in Cornwall. Many early British legends associate King Arthur with Cornwall putting his birthplace at Tintagel, the court of his uncle King Mark of Cornwall, father of Tristan & Iseult the most famous Cornish lovers.

Cornwall shares its ancient cultural heritage with its 'Brythonic cousins' Brittany and Wales, as well as Ireland and parts of England such as neighbouring Devon. Many ancient tales of the Bards, whether the Arthurian Cycle, Tristan and Iseult or the Mabinogion take place in the ancient kingdom of Cerniw between Greater and Lesser Britains with a foot on either side of the 'British Sea' Mor Brettanek/Mor Breizh.

Part of Cornish mythology is derived from tales of seafaring pirates and smugglers who thrived in and around Cornwall from the early modern period through to the 19th century. Cornish pirates exploited both their knowledge of the Cornish coast as well as its sheltered creeks and hidden anchorages. For many fishing villages, loot and contraband provided by pirates supported a strong and secretive underground economy in Cornwall.[2]

Legendary creatures that appear in Cornish folklore include buccas, knockers, Giants and piskies.[3] Tales of these creatures are thought to have developed as supernatural explanations for the frequent and deadly cave-ins that occurred during 18th century Cornish tin mining, or else a creation of the oxygen-starved minds of exhausted miners who returned from the underground.

The knocker or bucca (Cornish) is the Welsh and Cornish equivalent of Irish leprechauns and English and Scottish brownies. About two feet tall and grizzled, but not misshapen, they live beneath the ground. Here they wear tiny versions of standard miner's garb and commit random mischief, such as stealing a miner's unattended tools and food - they were often cast a small offering of food - usually the crust of a pasty - to appease their malevolence.

Many landscape features, from the barren granite rock features on Bodmin Moor, to the dramatic cliff seascape, to the mystical form of St Michael's Mount are explained as the work of Giants and English tales such as the early eighteenth century Jack the Giant Killer may recall much older British folk traditions recorded elsewhere in medieval Welsh language manuscripts and closely related to the folk traditions of Dartmoor in neighbouring Devon.

Old Michaelmas Day falls on 11 October (10 October according to some sources). According to an old legend, blackberries should not be picked after this date. This is because, so British folklore goes, Satan was banished from Heaven on this day, fell into a blackberry bush and cursed the brambles as he fell into them. In Cornwall, a similar legend prevails, according to which the devil urinated on them.[4]

"Mist from the hill / Brings water for the mill; / Mist from the sea /Brings fine weather for me."[5] "Lundy plain, Sign of rain" (current in north Cornwall where Lundy Island is normally visible). "When he see a sign for Roach, turnaround!"

Nellie Sloggett of Padstow devoted much of her attention to Cornish folklore and legend. She collected and recorded many stories about the Piskey folk, fairies of Cornish myth and legend. She published most of her works in this category under her better-known pen-name of Enys Tregarthen.[6]

Dozmary Pool is identified by some people with the lake in which, according to Arthurian legend, Sir Bedivere threw Excalibur to The Lady of the Lake.[7] Another legend relating to the pool concerns Jan Tregeagle.

The Beast of Bodmin has been reported many times but never identified with certainty.

According to legend, the Mermaid of Padstow created the Doom Bar as a dying curse, after being shot by a sailor. However, there are many different versions of the story and the precise details are unclear. Some versions start by stating that she used to guide ships up the estuary and others that she would visit and spy upon ships in harbour, yet more tell of how she used to sit upon a rock at Hawkers Cove. She then met a man, and one fell in love with the other. One version explains that she was love sick, and tried to lure him beneath the waves, however he escaped by shooting her.[8] Another version suggested the man, Tristram Bird, fell in love with her and asked her to marry him, though she refused. In his rage he shot her.[9] Another suggestion is that a fisherman, Tom Yeo, shot her because he thought she was a seal. The ending of the legend is generally similar. With her dying breath, she levelled a curse at Padstow, or at the harbour itself, stating that the harbour will be desolate or unsafe. With that, a great storm came, wrecking many boats and creating the great sand bank known as the Doom Bar. 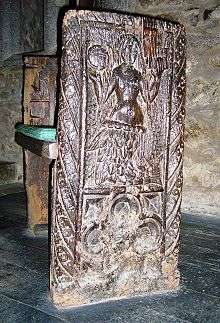 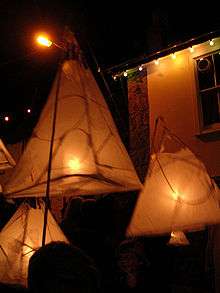 Within the bounds of Gulval parish lies the disused Ding Dong mine, reputedly one of the oldest in Cornwall. Popular local legend claims that Joseph of Arimathea, a tin trader, visited the mine and brought a young Jesus to address the miners, although there is no evidence to support this.[10]

At Zennor there is a legend of the Mermaid of Zennor and at Mousehole, Tom Bawcock is a legendary fisherman from the village who according to legend risked his life to go out and fish and managed to come back with enough fish to feed the village until the storm was over. All the fish was put into a big pie, and the pie called "Stargazy pie".

The Merry Maidens stone circle at St Buryan: the local myth about the creation of the stones suggests that nineteen maidens were turned into stone as punishment for dancing on a Sunday. (Dans Maen translates as Stone Dance.) The pipers, two megaliths some distance north-east of the circle, are said to be the petrified remains of the musicians who played for the dancers. A more detailed story explains why the Pipers are so far from the Maidens - apparently the two pipers heard the church clock in St Buryan strike midnight, realised they were breaking the sabbath, and started to run up the hill away from the maidens who carried on dancing without accompaniment. These petrifaction legends are often associated with stone circles, and is reflected in the folk names of some of the nearby sites, for example, the Tregeseal Dancing Stones, the Nine Maidens of Boskednan, as well as the more distant Hurlers and Pipers on Bodmin Moor.