(Tamil: குற்றாலம்) or Kuttralam or Kuttalam, Spa of South India, is a panchayat town situated at a mean elevation of 160 m (520 ft) on the Western Ghats in Tirunelveli District of Tamil Nadu, India. Many seasonal and few perennial rivers such as the Chittar River, the Manimuthar River, the Pachaiyar River and the Tambaraparani River originate in this region. The numerous waterfalls and cascades along with the ubiquitous health resorts in the area have earned it the title the Spa of South India.[1] The falls carry a good amount of water only when there is a rain on the hills. Season begins from June of every year till September. The South West Monsoon brings in the cold breeze with mild temperature. From October to December North East Monsoon sets over in Tamil Nadu and the climate is cold and the rains are very heavy sometimes. Sometimes the falls get flooded and people are not allowed to take bath during floods.

Nestled in the Western Ghats, Courtallam has scenic surroundings. The hillocks which dominate the scenery disappear into the blue mist of Agasthiarmalai, the mountain bearing the name of a sage who made immense contributions to Tamil literature and is believed to have lived in the area.[3] The closest towns to Courtallam are Sengottai and Tenkasi at 5 km (3.1 mi) respectively. The closest airport is Tuticorin Airport (TCR) approximately 90 km (56 mi) away and the nearest railway station is Tenkasi, 5 km (3.1 mi) away. 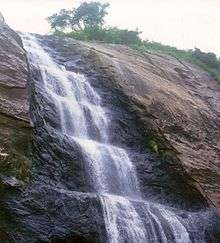 The three major waterfalls reachable by road are the Main Falls, Five Falls, and Old Courtallam Falls. Other waterfalls like Shenbaga Devi Falls and Honey Falls are reachable only by trekking on the mountain.

Tenkasi is a town located in the foothills of the Western Ghats near the Courtallam Waterfalls, close to the Tamil Nadu - Kerala border in Tirunelveli District. Tourists prefer staying in either courtallam or Tenkasi and the close proximity allows tourists to frequently travel between the two. The Palaruvi Falls is across the state border in Kerala.[6] 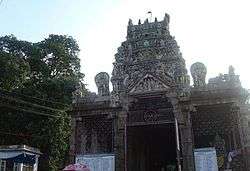 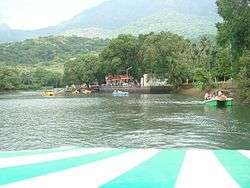 There are numerous resorts, hotels and lodges in Courtallam. Most of the luxurious hotels are located near to the main falls and Old Courtallam.

Some special trains from Chennai Egmore and Tuticorin are run by Southern Railway occasionally during season and festival time.

Owing to its scenic beauty, Courtallam has featured in many films.