Manimuthar River originates on the eastern slopes of Western Ghats in Tirunelveli District of the state of Tamil Nadu in southern India. It is a major tributary of the Tambaraparani River.

The river begins in the dense forest on a mountain peak 1,300 metres (4,300 ft) above sea level in Ex-Singampatti Zamindari, Ambasamudram taluk and flows 9 kilometres (6 mi) though small cataracts until it reaches the Tambaraparani River near Kallidaikurichi.

The tributaries of the Manimuthar are the Keezha River and the Varattar River. As a tributary, the Manimuther River adds a considerable amount of water to the Tamiraparani River as it seasonally is always in full.

In 1957, Manimuthar anicut was built across the river 3 kilometres (2 mi) before its juncture with the Tamiraparani.[1] 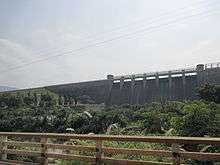 The image of spillway of Manimuthar anicut

The town of Vridhachalam on the banks of the Manimuktha River, 60 kilometres (37 mi) from Cuddalore, has an ancient [Shiva] temple dedicated to Lord Vridhagirishwarar. The yearly festival of Masi Magam draws large numbers of pilgrims to bathe in the sacred waters of the river.[2] This is Manimuktha river flows through Virudachalm. [Vritha Jalam in Sanskrit means very old-ground-water or Virutha Asalam - ancient mountain]. However, river Manimuthar, always refers to the major tributary of the perennial River Tamirabarani in Tirunelveli. There is another small river of the same name 'Manimuthar river' near Devakottai, in Sivagangai District. 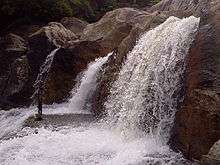 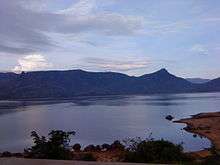 Located between elevations ranging from 1,000 to 1,500 metres (3,300 to 4,900 ft), the Manjolai area is set deep within the Western Ghats within the Kalakad Mundanthurai Tiger Reserve in the Tirunelveli District. Located on top of the Manimuthar Dam and the Manimuthar Water Falls, the Manjolai area comprises tea plantations, small settlements around the tea plantations, Upper Kodaiyar Dam and a windy viewpoint called Kuthiravetti.

The tea plantations and the whole of Manjolai Estates are tea operated by The Bombay Burmah Trading Corporation Ltd on forest lands leased by Raja of Singampatti Samasthanam. There are three Tea Estates within the Manjolai area – Manjolai Estate, Manimutharu Estate and Oothu Estate. The Estates are located on elevations ranging between 700 to 1,280 metres (2,300 to 4,200 ft). The estates, road and settlements in the Manjolai area are managed by The Bombay Burmah Trading Corporation Ltd. Majolai can be reached through public bus transport without any special permission; bus services are available daily . Images of Manjolai Hills can be viewed at http://www.flickr.com/photos/59865572@N00/sets/72157627351253129/