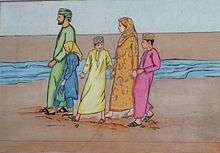 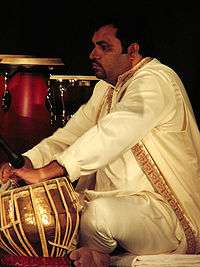 Tabla player at the 8th International Music Festival in Kuwait.

There is a rich and ancient culture in Eastern Arabia (Arab states of the Persian Gulf). Eastern Arabia's culture has always been oriented towards the sea.[1] While being Arab at its core, it has been heavily influenced by the cultures of Persia, South Asia and Horn of Africa, because of extensive trade links.

Cultures in the region include those of Bahrain, Kuwait, UAE, Eastern Saudi Arabia (Qatif and Al-Hasa), Qatar, Southern Iraq and Northern Oman.

Qarqe'an is an biannual celebration, observed in Eastern Arabia, that takes place on the 15th night of Sha'ban and on the 15th night of Ramadan. Gerga'oon is marked with children dressing in traditional attire and going door-to-door to receive sweets from neighbours, whilst also singing traditional songs. The tradition has existed for hundreds of years and deeply rooted in Gulf culture.[2]

Although the celebration of Qarqe'an shares superficial similarities with the Halloween custom of trick-or-treating, practiced in some western countries, Qarqe'an has no connection with horror and no associated origin with Halloween.

A variety of music and dance forms are practised in the region, including Fijiri, Fann At-Tanbura, Sawt, contemporary Khaliji music, Yowla and Liwa.

Traditional instruments include the Oud, along with a variety of drums and the manjur. The Tanbūra lyre is also used.

A number of different dialects of Arabic are spoken in the region, including Gulf Arabic and Bahrani Arabic. The Lurs language of Kumzari is also spoken by Omani people of Musandam Peninsula. Kumzari is the only Iranian language native to the Arab world.

The cuisine of the region includes Harees, seafood (including mahyawa), Biryani and Sabzi.

The dress of the region includes long Thobe (also called Dishdasha) for men, Bisht and Ghutra.

Traditional transport in the region includes boats such as Dhows and Abras.

Cultural institutions of the region include the television network Al Jazeera,[3] broadcast from Qatar, and competitor Al Arabiya, broadcast from Saudi Arabia.