Arab states of the Persian Gulf 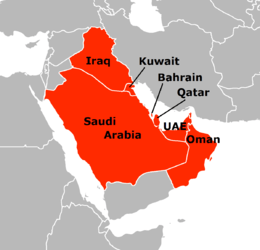 The Persian Gulf's coastline skirts seven Arab countries on its western shores and Iran to the east. (Oman's Musandam peninsula meets the gulf at the Strait of Hormuz.)

The Arab states of the Persian Gulf are the seven Arab states which border the Persian Gulf, namely Kuwait, Bahrain, Iraq, Oman, Qatar, Saudi Arabia and the United Arab Emirates (UAE).[1][2][3] All of these nations (with the exception of Iraq) are part of the Gulf Cooperation Council (GCC).[4]

Main articles: Culture of Eastern Arabia and Arab cuisine of the Persian Gulf

The inhabitants of Eastern Arabia's Gulf coast share similar cultures and music styles such as fijiri, sawt and liwa. The most noticeable cultural trait of Eastern Arabia's Gulf Arabs is their orientation and focus towards the sea.[10] Maritime-focused life in the small Persian Gulf Arab states has resulted in a sea-oriented society where livelihoods have traditionally been earned in marine industries.[10]

Before the GCC was formed in 1981, the term "Khaleeji" was solely used to refer to the inhabitants of Eastern Arabia.[7] Historically, "Khaleeji" meant descendants of Ichthyophagi, the coast-dwelling "fish eaters".[11]

Some states are constitutional monarchies with elected parliaments. Bahrain (Majlis al Watani) and Kuwait (Majlis al Ummah) have legislatures with members elected by the population.

The Sultanate of Oman also has an advisory council (Majlis ash-Shura) that is popularly elected. In the UAE, a federation of seven monarchical emirates, the Federal National Council functions only as an advisory body, but some of its members are now chosen via a limited electoral college nominated by the seven rulers. Saudi Arabia remains a hereditary monarchy with limited political representation. In Qatar, an elected national parliament has been mooted and is written into the new constitution, but elections are yet to be held.[12]

Press in the Gulf States have varying degrees of freedom with Kuwait topping the league with a lively press that enjoys considerably more freedom than its Gulf counterparts according to Freedom House and Reporters Without Borders. Both organizations rank Kuwait's press as the most free of all Gulf states and, in fact, rank amongst the top three most free press in the Arab world.[13][14] Qatar and Oman come in second and third respectively within the Gulf ranks.

The six Gulf states lie in a volatile region and their six governments undertake many steps to help ensure the Gulf region remain peacefully stable to help further their economic development and citizen wellbeing. According to the Institute of Economics and Peace (IEP)'s Global Peace Index of 2016, the six governments had varying degrees of success in maintaining peace amongst their respective borders with Qatar ranked number 1 amongst its Gulf peers as the most peaceful Gulf and Middle Eastern nation (and ranked 34 worldwide) while Kuwait ranks second in both the Gulf and the Middle East region (and 51 worldwide) followed by the UAE in the third spot (61 worldwide).[15] 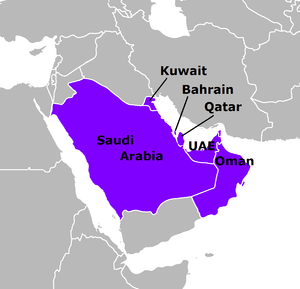 Map of the Gulf Cooperation Council's members (Iraq is not a member).

All of these Arab states have significant revenues from petroleum. The United Arab Emirates has been successfully diversifying the economy. 71% of UAE's total GDP comes from non-oil sectors.[16] Oil accounts for only 2% of Dubai's GDP.[17] Bahrain has the Persian Gulf's first "post-oil" economy because the Bahraini economy does not rely on oil.[18] Since the late 20th century, Bahrain has heavily invested in the banking and tourism sectors.[19] The country's capital, Manama is home to many large financial structures. Bahrain and Kuwait have a high Human Development Index (worldwide rank of 45 and 48 respectively) and was recognised by the World Bank as high income economies.

In addition, the small coastal states (especially Bahrain and Kuwait) were successful centers of trade and commerce prior to oil. Eastern Arabia also had significant pearl banks, but the pearling industry collapsed in the 1930s after the development of cultured pearl methods by Japanese scientists.

According to the World Bank, most of these Arab states have been the world's most generous donors of aid as a share of GDP.[20]