Dallas Keuchel (/ˈkaɪkəl/, KY-kəl; born January 1, 1988), nicknamed Kid Keuchy, is an American professional baseball pitcher for the Houston Astros of Major League Baseball (MLB). He is a left-handed starting pitcher. He previously attended the University of Arkansas, where he played baseball for the Arkansas Razorbacks.

Keuchel pitching for the Arkansas Razorbacks

Keuchel attended Bishop Kelley High School in Tulsa, Oklahoma, where he led the baseball team to the state championship.[1]

Keuchel then attended the University of Arkansas, where he played college baseball for the Arkansas Razorbacks baseball team. He registered a 5.88 earned run average (ERA) as a freshman, a 4.58 ERA as a sophomore, and a 3.92 ERA as a junior.[2]

During the 2009 season, Keuchel led the Razorbacks as the Friday-night ace. Entering May, Keuchel had a 6–1 record before defeating Anthony Ranaudo and #4 LSU. Keuchel pitched 8.1 innings and allowed only four runs. The following week, the Razorbacks lost at #21 Alabama, 2–1, with Keuchel taking the loss. The final regular season series was against Drew Pomeranz and #9 Ole Miss at Baum Stadium. The Razorbacks committed four errors in Keuchel's last regular season start, and he was tagged with the loss, ending the regular season with a 7–3 record. 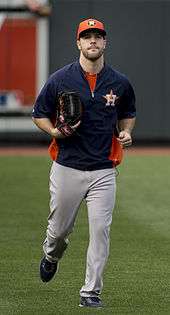 Keuchel with the Houston Astros in 2013

After his junior year at Arkansas, the Houston Astros selected Keuchel in the seventh round of the 2009 Major League Baseball (MLB) Draft.[3] He signed with the Astros and began his professional career with the Tri-City ValleyCats of the Class A-Short Season New York–Penn League, where he had a 2.70 ERA. He began the 2010 season with the Lancaster JetHawks of the Class A-Advanced California League. After posting a 3.36 ERA, the Astros promoted him to the Corpus Christi Hooks of the Class AA Texas League in July, where he had a 4.70 ERA for the remainder of the season. He began the 2011 season with Corpus Christi, and after pitching to a 3.17 ERA, received a promotion to the Oklahoma City RedHawks of the Class AAA Pacific Coast League, where he struggled with a 7.50 ERA.[2] 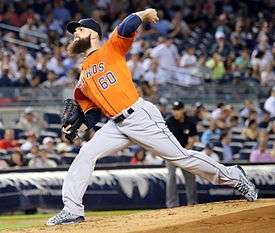 Keuchel started and won the 2015 American League Wild Card Game on three days rest.[17] On October 11, he followed up by beating the Kansas City Royals, 4–2, in Game 3 of the AL Divisional Series, to move the Astros within one game of advancing.[18] In Game 5, Keuchel was brought in for a relief appearance on just 2 days of rest in the 8th inning and surrendered a 3-run home run as the Royals extended their lead to 7-2 which they held on to win the game and the series. Following the season, Keuchel won the Cy Young Award, the Gold Glove Award, the Fielding Bible Award, and the Warren Spahn Award, given to the best left-handed pitcher in MLB.[19] Keuchel became the third Astro to win a Cy Young Award, Mike Scott and Roger Clemens having won the National League honors in 1986 and 2004 respectively.

Keuchel was born to Dennis and Teresa Keuchel. He has an older sister, Krista.[22]