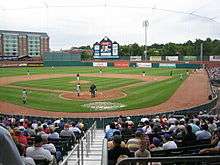 Double-A (or Class AA) is the second highest level of play in Minor League Baseball (MiLB) in the United States after Triple-A. There are thirty Double-A teams in three leagues at this classification: Eastern League, Southern League, and the Texas League.[1]

The Double-A classification usually hosts developing players that have been part of professional baseball for only a couple of years. These players can get to the Double-A level by earning a promotion from any of the Single-A or Rookie leagues.[2] Players often advance directly to the majors from this level, as the level of competition is higher. Because they are still advancing in their careers, the average talent level of Double-A may be higher than in Triple-A, which has minor and major league veterans who have been in the minor league system for a longer period of time and may have stagnated.[3] A small handful of players might be placed in Double-A to start, usually veterans from foreign leagues or top prospects out of college. The step up to the Double-A level can be one of the hardest promotions for such players because it is the level at which pitchers need to have a good off-speed pitch in their repertoire. In addition, it is the level where fastball-only hitters need to learn how to hit off-speed pitches, or their hopes of advancing to the majors will diminish.[3] Major League teams sometimes send players to play at the Double-A level to rehabilitate from injuries.[2]

Because players are not moving back and forth from the Major Leagues at this level, the rosters tend to be more stable.[4] Fans of Double-A teams have a longer amount of time to get acquainted with the players, which helps create a better relationship between the team and its fans.[4]

Unlike the major league and the Triple-A level, two of the three Double-A leagues have their season divided into two parts, the Eastern League being the exception. One team may clinch a spot in the playoffs by winning the division in first half of the season. The teams' records are then cleared and another team will also clinch a playoff slot during the second half. Wild cards are used to fill out the remaining teams. Usually, four teams qualify for the league playoffs. This system is used at the Class A level as well.[35][36][37]