Michael Bruce Fiers (born June 15, 1985) is an American professional baseball pitcher for the Houston Astros of Major League Baseball (MLB). He has also played in MLB for the Milwaukee Brewers. Fiers pitched a no-hitter on August 21, 2015.

The Milwaukee Brewers selected Fiers in the 22nd round of the 2009 Major League Baseball Draft.[2]

He began his career playing for the Rookie league Helena Brewers, Class A Wisconsin Timber Rattlers, and Class A-Advanced Brevard County Manatees in 2009. Fiers played the 2010 season at Brevard and with the Double-A Huntsville Stars. He began the 2011 season with Huntsville but was promoted to the Triple-A Nashville Sounds in late May 2011. 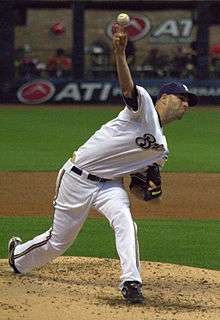 Fiers pitching for the Milwaukee Brewers in 2012

Fiers was called up to the majors for the first time on September 10, 2011.[2] On August 7, 2012, Fiers carried a perfect game into the 7th inning in a game against the Cincinnati Reds. He finished going 8 innings allowing 1 run on 3 hits, earning the victory.[3]

On September 11, 2014, pitching against the Miami Marlins, Fiers hit Giancarlo Stanton in the face with an 88 mph fastball, sending him to the hospital.[4] With his next pitch, Fiers proceeded to hit Reed Johnson on one of his hands when he attempted to paint the inside corner. Both pitches were called strikes, because the batters were in the act of swinging. Miami third-baseman Casey McGehee started yelling at the umpire, but Fiers thought that McGehee was yelling at him, so he tried to say that he did not do it on purpose, this then caused a bench-clearing shouting match. Fiers apologized to Stanton, and on September 12, 2014, Fiers was fined an undisclosed amount for causing the benches to clear.[5]

On July 30, 2015, the Brewers traded Fiers and Carlos Gómez to the Houston Astros for Brett Phillips, Domingo Santana, Josh Hader, and Adrian Houser.[6] On August 21, 2015, in his third start for the Astros, Fiers pitched a no-hitter against the Los Angeles Dodgers at Minute Maid Park, the 11th no-hitter in Astros' history and the first no-hitter for any team at Minute Maid Park. It was his first complete game as a major league pitcher; he finished the game with a career-high 134 pitches thrown, striking out 10 batters and walking three.[7]

Fiers throws four pitches. He leads with a four-seam fastball at 88–91 miles per hour (142–146 km/h). He also has a slider (82–85 miles per hour (132–137 km/h)), curveball (70–73 miles per hour (113–117 km/h)), and changeup (79–83 miles per hour (127–134 km/h)). He also experiments with a cutter in the mid 80's for some extra movement to induce ground balls or surprise hitters. His primary off-speed pitch to lefties is the changeup and to righties is the curveball.[8] His changeup is considered by many to be his best pitch, and he has excellent command of the strikezone with all of his pitches. Despite having relatively low velocity, his command, the movement of his pitches (particularly his slow, looping curveball) all make him quite capable of racking up strikeouts. He had a K/9 of 9.6 during his four years in the minors, and so far in Milwaukee, has a K/9 of 9.4 through his first season in the majors.