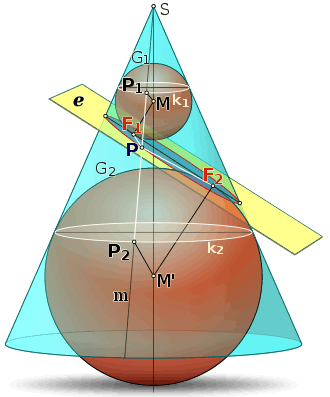 Dandelin spheres are touching the light blue plane that intersects the cone.

The Dandelin spheres were discovered in 1822.[1] They are named in honor of the Belgian mathematician Germinal Pierre Dandelin, though Adolphe Quetelet is sometimes given partial credit as well.[2] The Dandelin spheres can be used to prove at least two important theorems. Both of those theorems were known for centuries before Dandelin, but he made it easier to prove them.

The first theorem is that a closed conic section (i.e. an ellipse) is the locus of points such that the sum of the distances to two fixed points (the foci) is constant. This was known to Ancient Greek mathematicians such as Apollonius of Perga, but the Dandelin spheres facilitate the proof.[3]

Proof that the curve has constant sum of distances to foci

Consider the illustration, depicting a plane intersecting a cone to form an ellipse (the interior of the ellipse is colored light blue). The two Dandelin spheres are shown, one (G1) above the ellipse, and one (G2) below. The intersection of each sphere with the cone is a circle (colored white).

This proves a result that had been proved in a different manner by Apollonius of Perga.[3]

If (as is often done) one takes the definition of the ellipse to be the locus of points P such that d(F1, P) + d(F2, P) = a constant, then the argument above proves that the intersection of a plane with a cone is indeed an ellipse. That the intersection of the plane with the cone is symmetric about the perpendicular bisector of the line through F1 and F2 may be counterintuitive, but this argument makes it clear.

Proof of the focus-directrix property