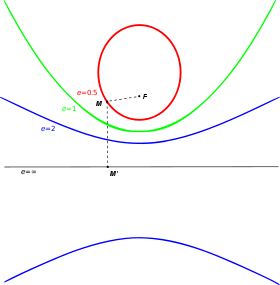 All types of conic sections, arranged with increasing eccentricity. Note that curvature decreases with eccentricity, and that none of these curves intersect.

In mathematics, the eccentricity, denoted e or

, is a parameter associated with every conic section. It can be thought of as a measure of how much the conic section deviates from being circular.

Furthermore, two conic sections are similar (identically shaped) if and only if they have the same eccentricity. 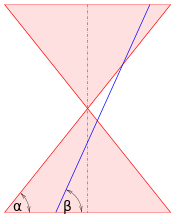 plane section of a cone

Any conic section can be defined as the locus of points whose distances to a point (the focus) and a line (the directrix) are in a constant ratio. That ratio is called eccentricity, commonly denoted as e.

The eccentricity can also be defined in terms of the intersection of a plane and a double-napped cone associated with the conic section. If the cone is oriented with its axis vertical, the eccentricity is

the plane section is a circle, for

a parabola. (The plane must not meet the vertex of the cone.)

. (Lacking a center the linear eccentricity for parabolas is not defined.)

In the case of ellipses and hyperbolas the linear eccentricity is sometimes called half-focal separation.

Three notational conventions are in common use:

This article uses the first notation.

When the conic section is given in the general quadratic form

the following formula gives the eccentricity e if the conic section is not a parabola (which has eccentricity equal to 1), not a degenerate hyperbola or degenerate ellipse, and not an imaginary ellipse:[1]

if the determinant of the 3×3 matrix

if that determinant is positive.

Ellipse and hyperbola with constant a and changing eccentricity e.

We define a number of related additional concepts (only for ellipses):

Other formulae for the eccentricity of an ellipse

The eccentricity of an ellipse is, most simply, the ratio of the distance f between the center of the ellipse and each focus to the length of the semimajor axis a.

The eccentricity is also the ratio of the semimajor axis a to the distance d from the center to the directrix:

The eccentricity can be expressed in terms of the flattening g (defined as g = 1 – b/a for semimajor axis a and semiminor axis b):

(Flattening is denoted by f in some subject areas, particularly geodesy.)

Define the maximum and minimum radii

which is the distance between the foci divided by the length of the major axis.

Ellipses, hyperbolas with all possible eccentricites from zero to infinity and a parabola on one cubic surface.

The definition closely follows the original "geometrical" concept, with one important difference - data points can have "weights". Such weights can lead to a deviation from the standard geometrical concept that assumes that all data points have same contributions.