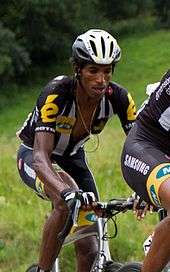 Teklehaimanot at the 2015 Tour de France

Teklehaimanot was a member of the UCI's World Cycling Centre training program before signing for the new Australian cycling team GreenEDGE in 2012.[4] Whilst at the World Cycling Centre he was diagnosed with tachycardia, which was corrected by surgery in early 2009. He returned to riding in May of that year and went on to finish sixth overall in that year's Tour de l'Avenir.[5] In 2010 he rode as a trainee for Cervélo TestTeam. The same year, he won the African Championships in the road race, individual time trial and team time trial, at both senior and under-23 levels. On the 2010–2011 UCI Africa Tour, he won the Tour of Rwanda and the Kwita Izina Cycling Tour.[6] He participated in the 2012 Summer Olympics being the first Eritrean competing in a sport other than athletics; he finished the road race in the 73rd position. In 2012, he became the first Eritrean to ride in La Vuelta, one of the 3 grand tours; he finished the race 146th overall. Teklehaimanot joined MTN–Qhubeka for the 2014 season, on a two-year contract.[3] In 2015, at the Critérium du Dauphiné, he won the first World Tour jersey in MTN–Qhubeka's history by taking the mountains competition.[7] He was named in the start list for the 2015 Tour de France.[8] In July of the year, Teklehaimanot also became the first rider from an African team to wear the polka dot jersey at the Tour de France.[9]