Siutsou was born in the Belarusian city of Gomel in 1982. He shot to prominence in 2004, winning the Under-23 World Road Race Championships, and the senior Belarusian championships in 2006.

He joined Barloworld for the 2007 season, and rode the Tour de France for the first time, finishing 32nd overall. Siutsou moved to Team High Road for 2008, where he took his first stage race overall victory at the Tour de Georgia, and came 16th overall in the Tour de France. In the 2009 Giro d'Italia, he won his first two Grand Tour stages, the team time trial on stage one and a successful solo breakaway in stage eight. 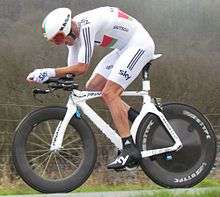 Siutsou enjoyed his most successful year to date in 2011. He finished tenth overall in the Giro d'Italia – again winning the team time trial stage – with an eighth-place finish in the Critérium du Dauphiné, and won the Belarusian National Time Trial Championship for the first time.

He moved to Team Sky for the 2012 season. Siutsou was part of the teams that helped Richie Porte win the Volta ao Algarve, Bradley Wiggins win Paris–Nice, the Tour de Romandie and Critérium du Dauphiné, and Michael Rogers win Bayern-Rundfahrt. Siutsou was selected to ride the Tour de France as one of Wiggins' main domestiques, but crashed out on stage three with 50 kilometres (31 mi) remaining with a fractured left tibia, the first retirement of the 2012 Tour.[3]

Siutsou claimed a solo win on stage two of the 2013 Giro del Trentino.[4]

In October 2015 he announced that he would be leaving Team Sky after four seasons to join Team Dimension Data for 2016, with the team describing his role as being a super-domestique and mentor to the team's younger riders.[5]