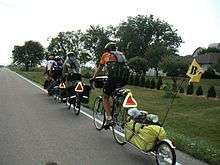 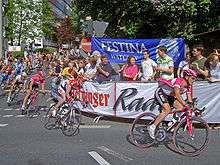 Road cycling is the most widespread form of cycling. It includes recreational, racing, and utility cycling. Road cyclists are generally expected to obey the same rules and laws as other vehicle drivers or riders and may also be vehicular cyclists.

Road cycling is an activity most commonly performed on a bicycle. There are many types of bicycles that are used on the roads including: BMX, recumbents, racing, touring and utility bicycles.

Dedicated road bicycles have drop handlebars and multiple gears, although there are single and fixed gear varieties. Road bikes also use narrow, high-pressure tires to decrease rolling resistance, and tend to be somewhat lighter than other types of bicycle. The drop handlebars are often positioned lower than the saddle in order to put the rider in a more aerodynamic position. In an effort to become more aerodynamic, some riders have begun using aerobars.[1] Who and when aerobars where invented is unclear but they seem to date back to the early 1980s.[2] The light weight and aerodynamics of a road bike allows this type of bicycle to be the second most efficient self-powered means of transportation, behind only recumbent bicycles due to the latter's higher aerodynamic efficiency.

Mountain bikes fitted with slick or semi-slick are also popular for commuters. Though less efficient, the upright riding position allows the cyclist a better view of traffic, and they can also be readily fitted with mudguards, cargo racks and other accessories.

A hybrid form of road cycling has been gaining solid ground lately called Cyclo-cross. Cyclo-cross (sometimes CCX, CX, cyclocross) is bicycling off road and not to be confused with mountain biking. Cross bikes are nearly identical to a traditional road bike except for its wheels. Cyclo-cross bikes have tread on their tires for the purpose of riding on unpaved roads and rough trails.

Common courtesy when road biking is to obey the same rules and laws as other vehicles. Being observant and attentive while riding on a road with traffic is very important. Due to the aerodynamics of a road bike, bikers alongside the road may be hard to see by passing motorists. To appear more noticeable, wearing bright and reflective colours will reduce the chance of an accident.

Road racing is a highly publicized and viewed sport in almost every country in the world. The extraordinary efficiency of the bicycle makes it a very popular item for recreational fun, transport, or in racing. It is performed on roads and pathways, but mainly is restricted to concrete or pavement.