Dasari Narayana Rao (born 4 May 1942, Palakollu, West Godavari) is an Indian film director known for his works predominantly in Telugu cinema, and few Bollywood films. He has directed about 151films, produced 53 films and worked in more than 250 films as a dialogue writer, and lyricist. Most of his films emphasise social injustice, corruption and gender discrimination. He has received two National Film Awards, nine state Nandi Awards, and six Filmfare Awards South. Besides graduating with a BA degree, he used to take part in scores of drama competitions. During his career he has also acted in Telugu, Tamil, and Kannada languages.[1]

He holds Limca World Record for directing the most number of films.[2] He directed films like Tandra Paparayudu, (1986), Surigaadu (1992), screened at International Film Festival of India in the panorama section,[3][4] and Kante Koothurne Kanu (2000) which received the National Film Award Special Mention Feature Film. In 1983, he directed Meghasandesam which received critical acclaim at the Indian panorama, Chicago, 1983 Cannes Film Festival and Moscow film festivals. The film has also received the National Film Award for Best Feature Film in Telugu.[5][6] He achieved national fame when he directed Rajesh Khanna in two different roles in Asha Jyoti and Aaj Ka M.L.A. Ram Avtar in 1984. He has introduced actors and directors such as Mohan Babu, R. Narayana Murthy, Raviraja Pinisetty, Muthyala Subbaiah to Telugu film industry.[7]

Dasari was elected to the Rajya Sabha. He became the Minister of state in Ministry of Coal.[10] Said to be a confidante of Congress President Sonia Gandhi, Dasari once again became active in politics after Congress Party came back to power in 2004.[11]

On 11 June 2013 Central Bureau of Investigation booked Dasari Narayana Rao for receiving Rs. 2.25 crores from Naveen Jindal in connection with Coalgate scam, and filed FIR against both.[12][13] 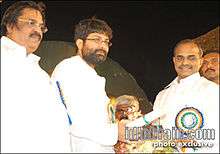