Akkineni Nagarjuna (born 29 August 1959) is an Indian film actor, producer and television presenter who works primarily in the Telugu cinema, and television. He has acted in over ninety films as an actor in a lead, supporting and cameo roles, including Bollywood and Tamil films. He has received nine state Nandi Awards, three Filmfare Awards South and one Special Mention at the National Film Awards. The 1996 film Ninne Pelladata which he produced, was declared the Best Telugu film of the year at the National Film Awards.

He enacted the role of 15th century composer Annamacharya in the 1997 film Annamayya; as Yavakri (the son of the ascetic Bharadwaja) in the 2002 film Agni Varsha; as Major Padmapani Acharya in the 2003 war film, LOC Kargil; as 17th-century composer Kancherla Gopanna in the 2006 film Sri Ramadasu; as Sai Baba of Shirdi in the 2012 film Shirdi Sai; and as Chandaludu (Lord Siva in disguise) in the 2013 film Jagadguru Adi Sankara.[2]

In 1989, he starred in the Maniratnam directed Romantic drama film, Geetanjali, which won the National Film Award for Best Popular Film Providing Wholesome Entertainment. In the same year, he acted in Siva, an action blockbuster directed by Ram Gopal Varma, which premiered at the 13th International Film Festival of India.[3] In 1990, he subsequently made his Bollywood debut with the Hindi remake of the same film titled Shiva, and tasted success. In 1998, He received the National Film Award-Special Mention for his performance in the historical film Annamayya.

In 2013, he has represented Cinema of South India at the Delhi Film Festival's 100 Years of Indian Cinema's celebration, alongside Ramesh Sippy and Vishal Bhardwaj from Bollywood.[4] In 1995, He ventured into film production, with a production unit operating in Seychelles, and was a co-director of an Emmy Award-winning film animation company in Michigan, U.S.[5] Along with his brother, Akkineni Venkata Rathnam, Nagarjuna is the co-owner of the Production company, Annapurna Studios and is the president of the non-profit film school Annapurna International School of Film and Media based in Hyderabad.[6][7][8]

Akkineni Nagarjuna, was born on 29 August 1959 at Chennai, Tamil Nadu[9] to veteran actor Nageswara Rao Akkineni and Annapoorna Akkineni. The family later moved to Hyderabad where he attended the Hyderabad Public School and Little Flower Junior College. He got his Bachelor of Engineering from the College of Engineering, Guindy. He completed M.S. in Automobile Engineering from Eastern Michigan University.[10][11] He is the spouse of actress Amala Akkineni, the father of actors Naga Chaitanya and Akhil Akkineni

Nagarjuna, began his acting as a child artist in the 1967 Telugu film Sudigundalu directed by veteran Adurthi Subbarao. It stars his father Akkineni Nageswara Rao in lead role. Years later he made his debut as a lead actor through the 1986 Telugu film Vikram directed by V. Madhusudhana Rao. It is the remake of 1983 Hindi film Hero. The film was a success giving Nagarjuna a good start. Later, he was starred in films like Majnu, directed by Dasari Narayana Rao, which was well received and became successful, Nagarjuna received positive reviews for his portrayal. He was then starred in Sankeertana, another hit directed by debutant Geetha Krishna with music by Ilaiyaraaja. He is an excellent hero. The film was appreciated for its content and music. In 1988, he starred in the blockbuster Aakhari Poratam, scripted by Yandamuri Veerendranath, and directed by K. Raghavendra Rao where he was paired opposite Sridevi and Suhasini. In 1988 he starred in Janaki Ramudu paired along with Vijayashanti directed again by K. Raghavendra Rao was also a decent runner. Though his acting was not up to the standards, he was lucky enough to get more opportunities.

In 1989 He was starred in the Maniratnam directed Romantic-drama, Geetanjali. The film went on to win the National Film Award for Best Popular Film Providing Wholesome Entertainment in 1990. Immediately, he saw another success, Siva. This film marked the debut of leading Bollywood director Ram Gopal Varma. The film is based on college politics, a new genre at that time. In 1990, he subsequently made his Bollywood debut with the Hindi remake of the same film titled Shiva. Even, the Hindi version saw a huge box-office success. He was then starred in the social problem film Jaitra Yatra for which he received critical reception. He followed it up with average fares like Prema Yuddham, Nirnayam and Iddharu Iddhare. All the films did nothing exceptional to Nagarjuna's career as they were only moderately acclaimed and saw only average success.

He followed it up with box office hits like Killer, Neti Siddhartha, Chaithanya, and Nirnayam working with eminent directors such as Fazil, Prathap Pothen and Priyadarshan. Nagarjuna thus gained the tagline Celluloid Scientist for experimenting with different genres. Other films which were released in the subsequent years include President Gari Pellam, Varasudu, Gharana Bullodu and Allari Alludu. Among them, President Gari Pellam, Gharana Bullodu and Allari Alludu were big hits at box-office.

In 1994 he starred in a Hindi-Telugu bilingual Criminal directed by Mahesh Bhatt. The same year he ventured into comedy for the first time with Hello Brother. It was later remade into Hindi as Judwaa and dubbed into Tamil. In 1996, Nagarjuna starred and produced Ninne Pelladata, which was directed by Krishna Vamsi. The movie won the National Film Award for Best Feature Film in Telugu and Filmfare Award for Best Film - Telugu. The next year, Nagarjuna acted in Annamayya where he portrayed the role of Annamacharya, a 15th-century Telugu singer and poet, won him his Filmfare Best Actor Award and his first Nandi Award for Best Actor.He also received a National Award for Special mention for the film Annamayya. His subsequent releases were Nuvvu Vastavani, Ninne Premistha and Azad.

He was starred in the romantic comedies such as Santosham, Manmadhudu, and Shivamani as well. He produced Satyam in 2003, that starred his nephew Sumanth. In 2004, Nagarjuna had two releases, Nenunnanu and Mass. The latter was produced by Nagarjuna and directed by choreographer Lawrence Raghavendra. In 2005, Nagarjuna acted in and produced Super. In 2006, he starred in Sri Ramadasu, his second period film based on the 18th-century Telugu composer of the same name.[12] Nagarjuna received the Nandi Award for Best actor for the film. In December 2007, he appeared in Don and a year later, he appeared in King alongside Trisha Krishnan and Srihari.

In the year 2010, he had releases such as Kedi and Ragada. His latest film Gaganam was released on 11 February 2011. Its Tamil version was titled Payanam. In 2011 Nagarjuna signed three movies in a row. They are Rajanna,[13] Damarukam and Shirdi Sai.[14] He completed two new films Greekuveerudu starring Nayanatara opposite him and this was an average grosser at the box office. His next release was Bhai which was a disaster at the box office starring Richa Gandhopadhyay opposite to him.[15] In 2014, Nagarjuna, was starred in the blockbuster, family drama, Manam, directed by Vikram Kumar. Later, he has acted in Soggade Chinni Nayana, in a dual role, and later he did a handicapped role in Vamshi Paidipally's bilingual film Oopiri, which is a recent blockbuster hit. 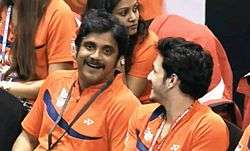 Nagarjuna made his début as a television producer in 2009 with the soap opera Yuva.[16] He is one of the major shareholders of the television channel Maa TV.[17] Nagarjuna hosts the Telugu version of KBC - Meelo Evaru Koteeswarudu. The first season of the show was telecasted on MAA TV From 9 June 2014 to 7 August 2014 (40 episodes). The second season was also showcased on MAA TV From 9 December 2014 to 27 February 2015 (55 episodes).[18][19] In 2015, He was honored with the Entertainment Leader Award (Television) for his work in Meelo Evaru Koteeswarudu at the TV-5 Business Leaders Awards ceremony.[20]

As of 2013, He is the co-owner of Mumbai Masters of Indian Badminton League along with Sunil Gavaskar, and Mahi Racing Team India along with Mahendra Singh Dhoni.[18][21][22] Nagarjuna currently endorses Kalyan Jewellers in Telangana and Andhra Pradesh.[23] He is listed #56 and #61 in Forbes India top 100 Celebrities for the year 2012 and 2013 respectively.[24][25]

Nagarjuna is the founding Partner of N3 Realty Enterprises, the parent entity for N-Convention center, N-Grill and District N in Hyderabad, and is jointly owned by himself and Nalla Preetham Reddy. In 2014, the Greater Hyderabad Municipal Corporation, identified that the convention facility had encroached upon the Full Tank Level boundary.[26] Subsequently, through legal opinions sought by Nagarjuna, a correction path of the land has been initiated by the local administrators.[27] 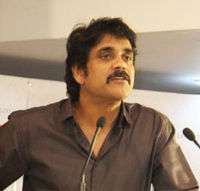 Nagarjuna at TeachAIDS launch in 2010

Nagarjuna, with his wife Amala is the co-founder of Blue Cross of Hyderabad, a registered society recognized by the Animal Welfare Board of India.[28][29] a non-government organization (NGO) in Hyderabad, India, which works towards the welfare of animals and preservation of animal rights. He is also involved in some welfare programs undertaken by the MAA TV association, and serves as the brand ambassador for HIV/AIDS awareness campaigns.[30] In 2010, he starred in an HIV/AIDS animated software tutorial created by TeachAIDS, a nonprofit founded at Stanford University.[31]

Below are the selected filmography of Nagarjuna.