In computing, a desktop environment (DE) is an implementation of the desktop metaphor made of a bundle of programs running on top of a computer operating system, which share a common graphical user interface (GUI), sometimes described as a graphical shell. The desktop environment was seen mostly on personal computers until the rise of mobile computing.[1][2] Desktop GUIs help the user to easily access and edit files, while they usually do not provide access to all of the features found in the underlying operating system. Instead, the traditional command-line interface (CLI) is still used when full control over the operating system is required.

A desktop environment typically consists of icons, windows, toolbars, folders, wallpapers and desktop widgets (see Elements of graphical user interfaces and WIMP).[3] A GUI might also provide drag and drop functionality and other features that make the desktop metaphor more complete. A desktop environment aims to be an intuitive way for the user to interact with the computer using concepts which are similar to those used when interacting with the physical world, such as buttons and windows.

While the term desktop environment originally described a style of user interfaces following the desktop metaphor, it has also come to describe the programs that realize the metaphor itself.[4] This usage has been popularized by projects such as the Common Desktop Environment, K Desktop Environment, and GNOME.

History and common use

The first desktop environment was created by Xerox and was sold with the Xerox Alto in the 1970s. The Alto was generally considered by Xerox to be a personal office computer; it failed in the marketplace because of poor marketing and a very high price tag.[5] With the Lisa, Apple introduced a desktop environment on an affordable personal computer, which also failed in the market.

Microsoft Windows dominates in marketshare among personal computers with a desktop environment. Computers using Unix-like operating systems such as OS X, Chrome OS, Linux, BSD or Solaris are much less common;[6] however, as of 2015 there is a growing market for low-cost Linux PCs using the X Window System or Wayland with a broad choice of desktop environments. Among the more popular of these are Google's Chromebooks and Chromeboxes, Intel's NUC, the Raspberry Pi, etc. 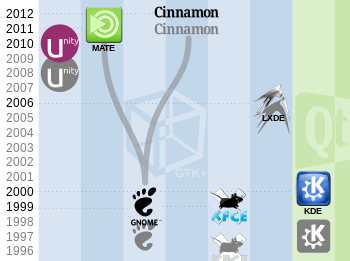 On systems running the X Window System (typically Unix-family systems such as Linux, the BSDs, and formal UNIX distributions), desktop environments are much more dynamic and customizable to meet user needs. In this context, a desktop environment typically consists of several separate components, including a window manager (such as Mutter or KWin), a file manager (such as Files or Dolphin), a set of graphical themes, together with toolkits (such as GTK+ and Qt) and libraries for managing the desktop. All these individual modules can be exchanged and independently configured to suit users, but most desktop environments provide a default configuration that works with minimal user setup.

Some window managers—​​such as IceWM, Fluxbox, Openbox, ROX Desktop and Window Maker—​​contain relatively sparse desktop environment elements, such as an integrated spatial file manager, while others like evilwm and wmii do not provide such elements. Not all of the program code that is part of a desktop environment has effects which are directly visible to the user. Some of it may be low-level code. KDE, for example, provides so-called KIO slaves which give the user access to a wide range of virtual devices. These I/O slaves are not available outside the KDE environment.

Initially, CDE was available as a proprietary solution, but was never popular on Linux systems due to cost and licensing restrictions. In 1996 the KDE was announced, followed in 1997 by the announcement of GNOME. Xfce is a smaller project that was also founded in 1996,[7] and focuses on speed and modularity, just like LXDE which was started in 2006. A comparison of X Window System desktop environments demonstrates the differences between environments. GNOME and KDE were usually seen as dominant solutions, and these are still often installed by default on Linux systems. Each of them offers:

In the early 2000s, KDE reached maturity[17] along with GNOME. The Appeal[18] and ToPaZ[19] projects focused on bringing new advances to the next major releases of both KDE and GNOME respectively. Although striving for broadly similar goals, GNOME and KDE do differ in their approach to user ergonomics. KDE encourages applications to integrate and interoperate, is highly customizable, and contains many complex features, all whilst trying to establish sensible defaults. GNOME on the other hand is more prescriptive, and focuses on the finer details of essential tasks and overall simplification. Accordingly, each one attracts a different user and developer community. Technically, there are numerous technologies common to all Unix-like desktop environments, most obviously the X Window System. Accordingly, the freedesktop.org project was established as an informal collaboration zone with the goal being to reduce duplication of effort.

The most common desktop environment on personal computers is Microsoft Windows' built-in interface. It was titled Luna in Windows XP and Aero from Windows Vista onward. Also common is Aqua, included with Apple's Mac OS X.

Mainstream desktop environments for Unix-like operating systems use the X Window System, and include KDE, GNOME, Xfce, and LXDE, any of which may be selected by users and are not tied exclusively to the operating system in use.

X window managers that are meant to be usable stand-alone — without another desktop environment — also include elements reminiscent of those found in typical desktop environments, most prominently Enlightenment. Other examples include OpenBox, Fluxbox, WindowLab, Fvwm, as well as Window Maker and AfterStep, which both feature the NeXTSTEP GUI look and feel.

The Amiga approach to desktop environment was noteworthy: the original Workbench desktop environment in AmigaOS evolved through time to originate an entire family of descendants and alternative desktop solutions. Some of those descendants are the Scalos,[21] the Ambient desktop of MorphOS, and the Wanderer desktop of the AROS open source OS. WindowLab also contains features reminiscent of the Amiga UI. Third-party Directory Opus software, which was originally just a navigational file manager program, evolved to become a complete Amiga desktop replacement called Directory Opus Magellan.

There is the Workplace Shell that runs on IBM OS/2 or eComStation.

The BumpTop project is an experimental desktop environment. Its main objective is to replace the 2D paradigm with a "real-world" 3D implementation, where documents can be freely manipulated across a virtual table.