Xfce (pronounced as four individual letters)[3] is a free and open-source desktop environment for Unix and Unix-like operating systems, such as Linux, Solaris, and BSD.

Xfce aims to be fast and lightweight, while still being visually appealing and easy to use. Xfce embodies the traditional UNIX philosophy of modularity and re-usability. It consists of separately packaged parts that together provide all functions of the desktop environment, but can be selected in subsets to suit user needs and preference. Another priority of Xfce is adherence to standards, specifically those defined at freedesktop.org.[4]

Like GNOME, Xfce is based on the GTK+ toolkit. It uses the Xfwm window manager, described below. Its configuration is entirely mouse-driven, with the configuration files hidden from the casual user.[5] Xfce does not feature any desktop animations, but Xfwm supports compositing.

Olivier Fourdan started the project in 1996 as a Linux version of the Common Desktop Environment (CDE),[6][7] a Unix desktop environment that was initially proprietary and later released as free software.[8] However, after a dozen years of development and several major versions, Xfce has diverged from CDE and stands on its own. The name "Xfce" originally stood for "XForms Common Environment", but since that time Xfce has been rewritten twice and no longer uses the XForms toolkit. The name survived, but it is no longer capitalized as "XFCE", but rather as "Xfce". The developers' current stance is that the initialism no longer stands for anything specific. It has been nicknamed "Cholesterol Free Desktop Environment". Another possibility X Freakin' Cool Environment is suggested at Xfce Wiki. As a result, Xfce is currently an acronym that doesn't stand for anything.[9] 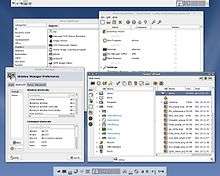 Xfce began as a simple project created with XForms. Olivier Fourdan released the program, which was just a simple taskbar, on SunSITE.[10]

Fourdan continued developing the project and in 1998, Xfce 2 was released with the first version of Xfce's window manager, Xfwm. He requested to have the project included in Red Hat Linux, but was refused due to its XForms basis. Red Hat only accepted software that was open source and released under either a GPL or BSD compatible license, whereas, at the time, XForms was closed source and free only for personal use.[10] For the same reason, Xfce was not in Debian before version 3, and Xfce 2 was only distributed in Debian's contrib repository.[11]

In March 1999 Fourdan began a complete rewrite of the project based on GTK+, a non-proprietary toolkit rising in popularity. The result was Xfce 3.0, licensed under the GPL. Along with being based completely on free software, the project gained GTK+ drag-and-drop support, native language support, and improved configurability. Xfce was uploaded to SourceForge.net in February 2001, starting with version 3.8.1.[12] 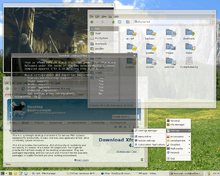 In version 4.0.0, released 25 September 2003, Xfce was upgraded to use the GTK+ 2 libraries.[13] Changes in 4.2.0 included a compositing manager for Xfwm which added built-in support for transparency and drop shadows, as well as a new default SVG icon set.[14] In January 2007, Xfce 4.4.0 was released. This included the Thunar file manager, a replacement for Xffm. Support for desktop icons was added. Also, various improvements were made to the panel to prevent buggy plugins from crashing the whole panel.[15] In February 2009 Xfce 4.6.0 was released. This version had a new configuration backend, a new settings manager and a new sound mixer, as well as several significant improvements to the session manager and the rest of Xfce's core components.[16]

In January 2011, Xfce 4.8.0 was released. This version included changes such as the replacement of ThunarVFS and HAL with GIO, udev, ConsoleKit and PolicyKit, and new utilities for browsing remote network shares using several protocols including SFTP, SMB, and FTP. Window clutter was reduced by merging all file progress dialog boxes into a single dialog. The panel application was also rewritten for better positioning, transparency, item and launcher management. 4.8 also introduced a new menu plugin to view directories. The 4.8 plugin framework remains compatible with 4.6 plugins. The display configuration dialog in 4.8 supports RandR 1.2, detecting screens automatically and allowing users to pick their preferred display resolution, refresh rate and display rotation. Screens can be configured to either work in clone mode or being placed next to each other. Keyboard selection has become easier and more user-friendly. Also, the manual settings editor has been updated to be more functional.[17]

The 4.8 development cycle was the first to use the new release strategy formed after the "Xfce Release and Development Model" developed at the Ubuntu Desktop Summit in May 2009. A new web application was employed to make release management easier, and a dedicated Transifex server was set up for Xfce translators.[18] The project's server and mirroring infrastructure was also upgraded, partly to cope with anticipated demand following the release announcement for 4.8.

Xfce 4.10, released 28 April 2012, introduced a vertical display mode for the panel and moved much of the documentation to an online wiki. The main focus of this release was on improving the user experience.[19] 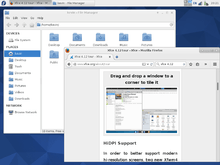 An Xfce 4.12 example desktop running on Fedora 22; notice the file manager has been rewritten in GTK+ 3.

Xfce 4.12 was released on February 28, 2015, two years and ten months later, contrary to mass internet speculation about the project being "dead".[20] The target of 4.12 was to improve user experience and take advantage of technologies introduced in the interim. New window manager features include an Alt+Tab dialog and smart multi-monitor handling. Also, new power management plugin for the panel's notification area was introduced, as well as a new default text editor and an enhanced file manager.[21] With 4.12, the project reiterated its commitment to Unix-like platforms (other than Linux) by featuring OpenBSD screenshots.[22] Xfce 4.12 supports GTK+ 3 and most of its core applications have been rewritten in GTK+ 3.[23]

The planned release of Xfce 4.14 was announced in April 2016. The main goals of the release include porting the remaining core components from GTK+ 2 to GTK+ 3, replacing the dependency on dbus-glib with GDBus, GNOME's implementation of the D-Bus specification, and removing deprecated widgets. Major features are postponed for a later 4.16 release.[24]

Applications developed by the Xfce team are based on GTK+ and self developed Xfce libraries.

Xfce provides a development framework which contains the following components:

Other than Xfce itself, there are third-party programs which use the Xfce libraries, such as the Xfce-terminal (former Terminal). One of the services provided to applications by the framework is a red banner across the top of the window when the application is running with root privileges warning the user that they could damage system files.

A terminal emulator provided as part of the Xfce project, but it can be used in other X Window System environments as well. It supports tabs, customizable key bindings, colors, and window sizes. It was designed to replace GNOME Terminal, which depends on the GNOME libraries. Like GNOME Terminal, it is based on the VTE library.

Starting with version 4.2, Xfwm integrates its own compositing manager.[25]

Thunar is the default file manager for Xfce, replacing Xffm. It resembles GNOME's Nautilus and is designed for speed and a low memory footprint[26] as well as being highly customizable through plugins. Xfce also has a lightweight archive manager called Xarchiver, but this is not part of the core Xfce 4.4.0.[27] More recently, Squeeze has been started as an archive manager designed to integrate better into the Xfce desktop, though no releases have been made since 2008,[28] the git repository of squeeze has been active and is more feature rich than the last stable release.

Starting with version 4.4, Xfcalendar was renamed to Orage (French for "thunderstorm") and several features were added. Orage has alarms and uses the iCalendar format, making it compatible with many other calendar applications. It also includes a panel clock plugin and an international clock application capable of simultaneously showing clocks from several different time zones. 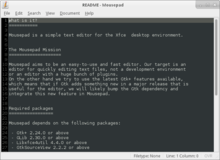 Mousepad is the default text editor for Xfce in some Linux distributions, including Xubuntu.[29] Mousepad aims to be an easy-to-use and fast editor, meant for quickly editing text files, not a development environment or an editor with a huge bunch of plugins. It initially originated as a fork of Leafpad, developed by Erik Harrison and Nick Schermer, but since then, it has been rewritten from scratch.

A front-end for the GStreamer framework. It is developed by Ali Abdallah and is part of the Xfce Goodies.[30] Originally only playlist based, it now includes an option to replace the entire playlist when opening a file for playing.[31]

A CD/DVD burning program. Starting with the 4.12 release of Xfce, Xfburn is also able to burn Blu-ray discs. 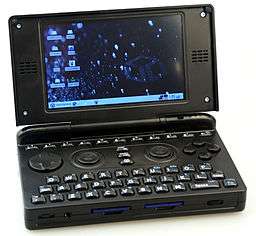 Xfce on the Pandora

Xfce is included as one of the graphical user interfaces on the Pandora handheld gaming system.

It is the default desktop environment in the following Linux distributions:

It is also included as a standard desktop option in many other distributions, including Arch Linux, Debian, Ubuntu, openSUSE, Fedora, Korora, Linux Mint, Slackware, and Mageia. That means a stable version of Xfce is kept in these distributions' repositories and the user can easily install it from the package manager. Debian makes a separate netinstall CD available that installs Xfce as the default desktop environment. In 2013 Debian briefly made it the default environment, replacing GNOME.[32][33]