This article is about the GNOME desktop environment. For other uses, see Gnome (disambiguation).

GNOME (pronounced /ɡˈnoʊm/[7] or /ˈnoʊm/[8]) is a desktop environment that is composed entirely of free and open-source software. GNOME was originally an acronym for GNU Network Object Model Environment. Its target operating system is Linux, but it is also supported on most derivatives of BSD.[9]

GNOME is developed by The GNOME Project, which is composed of both volunteers and paid contributors, the largest corporate contributor being Red Hat.[10][11] It is an international project that aims to develop software frameworks for the development of software, to program end-user applications based on these frameworks, and to coordinate efforts for internationalization and localization and accessibility of that software.

GNOME is part of the GNU Project.[12]

Since GNOME 2, productivity has been a key focus for GNOME. To this end, the GNOME Human Interface Guidelines (HIG) were created. All GNOME programs share a coherent style of graphical user interface (GUI) but are not limited to the employment of the same GUI widgets. Rather, the design of the GNOME GUI is guided by concepts described in the GNOME HIG, itself relying on insights from cognitive ergonomics.[13] Following the HIG, developers can create high-quality, consistent, and usable GUI programs, as it addresses everything from GUI design to recommended pixel-based layout of widgets.

During the GNOME 2 rewrite, many settings deemed of little value to the majority of users were removed. Havoc Pennington summarized the usability work in his 2002 essay "Free Software UI", emphasizing the idea that all preferences have a cost, and it is better to make software behave correctly by default than to add a UI preference to get the desired behavior:

A traditional free software application is configurable so that it has the union of all features anyone's ever seen in any equivalent application on any other historical platform. Or even configurable to be the union of all applications that anyone's ever seen on any historical platform (Emacs *cough*).
Does this hurt anything? Yes it does. It turns out that preferences have a cost. Of course, some preferences also have important benefits – and can be crucial interface features. But each one has a price, and you have to carefully consider its value. Many users and developers don't understand this, and end up with a lot of cost and little value for their preferences dollar.
— Havoc Pennington[14]

GNOME aims to make and keep the desktop environment physically and cognitively ergonomic for people with disabilities. The GNOME HIG tries to take this into account as far as possible but specific issues are solved by special software.

Clicking on the Activities button, moving the mouse to the top-left hot corner or pressing the Super key brings up the Overview.[17] The Overview gives users an overview of current activities and provides a way to switch between windows and workspaces and to launch applications. The Dash on the left houses shortcuts to favorite applications and open windows and an application picker button to show a list of all installed applications.[15] A search bar appears at the top and a workspace list for switching between workspaces is on the right. Notifications appear from the bottom of the screen.[18]

Beginning with GNOME 3.8, GNOME provides a Classic Mode for those who prefer a traditional desktop experience (similar to GNOME 2).[19]

GNOME runs on the X Window System and as of GNOME 3.10 also on Wayland as of GNOME 3.22 Wayland is the default.[16] Versions of GNOME are available in most Linux distributions either as the default desktop environment or as an installable option and also in the ports collections of most BSDs.

In May 2011 Lennart Poettering proposed systemd as a GNOME dependency.[20] As systemd is available only on Linux, the proposal led to a discussion of possibly dropping support for other platforms in future GNOME releases. Since GNOME 3.2 multiseat support has been only available on systems using systemd.[21] In November 2012 the GNOME release team concluded that systemd can be relied upon for non-basic functionality.[22]

There are a large number of GTK+- and Clutter-based programs written by various authors. Since the release of GNOME 3.0, The GNOME Project concentrates on developing a set of programs that accounts for the GNOME Core Applications. The commonalities of the GNOME Core Applications are the adherence to the current GNOME HUD guidelines as well as the tight integration with underlying GNOME layers like e.g. GVfs and also with one another e.g. GOA (gnome-online-accounts)[23] settings and GNOME Files with Google Drive[24][25] and GNOME Photos with Google Photos. Some programs are simply renamed existing programs with a revamped user interface, while others have been written from scratch.

GNOME Games have the look and feel of the GNOME Core Applications and are released simultaneously with GNOME. All have been rewritten conforming to the current GNOME Human Interface Guidelines.

Software has been written to provide development tools consistent with the GNOME desktop and to facilitate the development of GNOME software:

GNOME Builder is the new integrated development environment, Anjuta is the older one. Glade Interface Designer is the software to construct graphical interfaces using the graphical control elements in GTK+. Devhelp is an API browser, Accerciser an accessibility explorer, and there are several debugging tools, including Nemiver, GtkInspector[26][27] and Alleyoop, have also been provided to facilitate development of GNOME software.

GNOME is developed by The GNOME Project and provides the GNOME Desktop Environment, a graphical user interface and a set of core applications, and the GNOME Development Platform, a framework for building applications that integrate with the desktop.[29]

As with most free software projects, GNOME development is loosely managed. Discussion chiefly occurs on a number of public mailing lists.[30] GNOME developers and users gather at an annual GUADEC meeting to discuss the current state and the future direction of GNOME.[31] GNOME incorporates standards and programs from freedesktop.org to better interoperate with other desktops.

GNOME is mainly written in C, C++, Vala, Python and JavaScript.[4] A number of language bindings are available.

Each of the component software products in the GNOME project has its own version number and release schedule. However, individual module maintainers coordinate their efforts to create a full GNOME stable release on an approximately six-month schedule, alongside its underlying libraries such as GTK+ and GLib. Some experimental projects are excluded from these releases.

GNOME version numbers follow the scheme v.xx.yy. Here, v is a major version, which can include large changes such as ABI breakage; these have no regular schedule and occur in response to requirements for large-scale changes. xx is a minor version, released on the above schedule of approximately every 6 months, in which the 1- or 2-digit number's parity indicates the type of release: if xx is even (e.g. 3.20) the release is considered stable, whereas if xx is odd it represents a current development snapshot (e.g. 3.21) that will eventually evolve into the next stable release. yy indicates a point release, e.g. 3.20.6; these are made on a frequency of weeks in order to fix issues, add non-breaking enhancements, etc.

GNOME releases are made to the main FTP server in the form of source code with configure scripts, which are compiled by operating system vendors and integrated with the rest of their systems before distribution. Most vendors use only stable and tested versions of GNOME, and provide it in the form of easily installed, pre-compiled packages. The source code of every stable and development version of GNOME is stored in the GNOME git source code repository. Interested users can always obtain a snapshot of the _master_ development branch or any other branch/tag and build a cutting-edge version for their own use.

A number of build-scripts (such as JHBuild or formerly GARNOME) are available to help automate the process of compiling the source code. 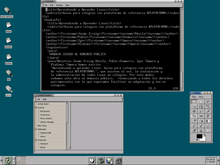 GNOME was started on August 15[33] 1997 by Miguel de Icaza and Federico Mena[34] as a free software project to develop a desktop environment and applications for it.[35] It was founded in part because K Desktop Environment, an already existing free software desktop environment, relied on the Qt widget toolkit which used a proprietary software license until version 2.0 (June 1999).[36][37] In place of Qt, the GTK+ toolkit was chosen as the base of GNOME. GTK+ uses the GNU Lesser General Public License (LGPL), a free software license that allows software linking to it to use a much wider set of licenses, including proprietary software licenses.[38] GNOME itself is licensed under the LGPL for its libraries, and the GNU General Public License (GPL) for its applications.[39]

The name "GNOME" was initially an acronym of GNU Network Object Model Environment, referring to the original intention of creating a distributed object framework similar to Microsoft's OLE,[40] but the acronym was eventually dropped because it no longer reflected the vision of the GNOME project.[41]

The California startup Eazel developed the Nautilus file manager from 1999 to 2001. De Icaza and Nat Friedman founded Helix Code (later Ximian) in 1999 in Massachusetts; this company developed GNOME's infrastructure and applications, and in 2003 was purchased by Novell. 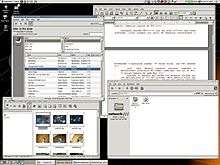 GNOME 2 was very similar to a conventional desktop interface, featuring a simple desktop in which users could interact with virtual objects, such as windows, icons, and files. GNOME 2 used Metacity as its default window manager. The handling of windows, applications, and files in GNOME 2 is similar to that of contemporary desktop operating systems. In the default configuration of GNOME 2, the desktop has a launcher menu for quick access to installed programs and file locations; open windows may be accessed by a taskbar along the bottom of the screen, and the top-right corner features a notification area for programs to display notices while running in the background. However, these features can be moved to almost any position or orientation the user desires, replaced with other functions or removed altogether.

Previously GNOME used the traditional desktop metaphor, but in GNOME 3 this was replaced with GNOME Shell, a more abstract metaphor where switching between different tasks and virtual workspaces takes place in a separate area called Overview. Also, since Mutter replaced Metacity as the default window manager, the minimize and maximize buttons no longer appear on the titlebar by default. Adwaita replaced Clearlooks as the default theme.[52] Many GNOME Core Applications also went through redesigns to provide a more consistent user experience.

These major changes initially evoked widespread criticism. The MATE desktop environment forked from the GNOME 2 codebase with the intent of retaining the traditional GNOME 2 interface while keeping it compatible with modern Linux technology, such as GTK+ 3. The Linux Mint team addressed the issue in another way by developing the "Mint GNOME Shell Extensions" that ran on top of GNOME 3 and allowed it to be used via the traditional desktop metaphor. This eventually led to the creation of the Cinnamon user interface, which was forked from the GNOME 3 codebase.

As of 2015, critical reception has been much more positive.[53] For example, Debian, a Linux distribution that had historically used GNOME 2, switched to Xfce when GNOME 3 was released but readopted GNOME 3 in time for the release of Debian 8 "Jessie".[53][54] Furthermore, Linus Torvalds, the creator of the Linux kernel, switched back to GNOME 3 in 2013, stating that "with the right extensions it is more pleasant".[53]

In 2005, on the official GNOME developmental mailing lists, Linus Torvalds encouraged users to switch to KDE 3 rather than use GNOME.[56][57] However, later Torvalds thought KDE Plasma 4 was a "disaster" because of its lack of maturity, and so he had switched to GNOME by 2009.[58] Dissatisfied with his perceived loss of productivity, he switched to Xfce after the GNOME 3 release, making another harsh post against GNOME.[59]

The following year he tried KDE Plasma 4 again,[60] only to go back to GNOME 3 stating that it "has been getting less painful" and "things are better than a year ago",[61] suggesting Frippery and gnome-tweak-tool to be merged into GNOME.[62]