Deutsche Bahn AG (abbreviated as DB, DB AG or DBAG) is a German railway company. Headquartered in Berlin, it is a private joint-stock company (AG), with the Federal Republic of Germany being its single shareholder.[2][3] Deutsche Bahn describes itself as the second-largest transport company in the world, after the German postal and logistics company Deutsche Post / DHL, and is the largest railway operator and infrastructure owner in Europe. It carries about two billion passengers each year.

Deutsche Bahn (literally "German Railway" in German) came into existence in 1994 as the successor to the former state railways of Germany, the Deutsche Bundesbahn ("German Federal Railway") of West Germany and the Deutsche Reichsbahn ("German State Railway") of East Germany.[4] It also gained ownership of former railway assets in West Berlin held by the Verwaltung des ehemaligen Reichsbahnvermögens (Administration of the Former Reichsbahn Assets).

While the railway network in Germany dates back to 1835 when the first tracks were laid on a 6 km (3.7 mi) route between Nuremberg and Fürth, Deutsche Bahn has been a relatively recent development in German railway history. Founded in January 1994 as a joint stock-company, Deutsche Bahn was designed to operate the railways of both the former East and West Germany after unification in October 1990 as a single, uniform, and private company.[5] There are three main periods of development in this unified German railway: its formation, its early years (1994–1999), and the period from 1999 to the present.

Originally, DBAG had its headquarters in Frankfurt am Main but moved to Potsdamer Platz in central Berlin in 1996, where it occupies a 26-storey office tower designed by Helmut Jahn at the eastern end of the Sony Center and named BahnTower. As the lease was to expire in 2010, DB had announced plans to relocate to Berlin Hauptbahnhof, and in 2007 a proposal for a new headquarters by 3XN Architects won an architectural competition which also included Foster + Partners, Dominique Perrault and Auer + Weber.[6] However, these plans have been put on hold, and the BahnTower leased for at least three more years.[7]

In December 2007, DB reorganised again, bringing all passenger services into its DB Bahn arm, logistics under DB Schenker and infrastructure and operations under DB Netze.

Members of the board 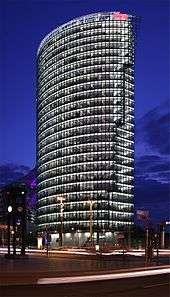 The corporate headquarters of Deutsche Bahn at Potsdamer Platz in Berlin

As of 2014 Rüdiger Grube is the director of the management board. Other members of the board include:[12]

The DB group (Deutsche Bahn AG) is divided into five main operations groups: Arriva, DB Bahn, DB Dienstleistungen, DB Netze, and DB Schenker. These subsidiaries are companies in their own right, although most of them are 100% owned by DBAG.[13] 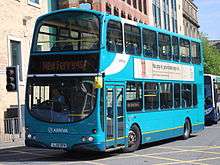 Deutsche Bahn placed a bid in May 2010 for the UK-based transport company Arriva. Arriva runs bus and rail companies in 12 European countries. The merger was approved by the European Commission in August 2010, subject to DB divesting Arriva services in Germany (these are now run as Netinera). The merger became effective on 27 August 2010.[15]

Services in the UK formerly run as DB Regio are now operated by a new subdivision of the company, Arriva UK Trains. It operates the Arriva Trains Wales, Chiltern Railways, CrossCountry, Grand Central and Tyne & Wear Metro operations. On 1 April 2016 Arriva became the operator of the Northern rail franchise. It also holds a 50% shareholding in London Overground Rail Operations and has lodged an application to operate services under the Great North Western Railway brand. In November 2016, Arriva Rail London will commence operating the London Overground concession in its own right.

DB Bahn is the group that manages passenger travel within Germany. Originally called Reise & Touristik, this group is responsible for the managing, ticketing, servicing and running of German passenger services. The group also handles the information and customer service side of the operation.[13] This group is divided into two business areas: DB Fernverkehr and DB Regio.

DB Fernverkehr AG is a semi-independent division of Deutsche Bahn that operates long-distance passenger trains in Germany. It was founded in 1999 in the second stage of the privatisation of German Federal Railways under the name of DB Reise&Touristik and renamed in 2003.

DB Fernverkehr operates all InterCityExpress and InterCity trains in Germany as well as several EuroCity trains throughout Europe. Unlike its sister companies DB Regio and DB Schenker, DB Fernverkehr still holds a de facto monopoly in its segment of the market as it operates hundreds of trains per day, while all competitors' long-distance services (Veolia Verkehr most notably) combined amount to no more than 10-15 trains per day. Additionally DB Fernverkehr operates a few long-distance coach services throughout Germany, called IC Bus.

DB Regio AG is the subsidiary of Deutsche Bahn that operates passenger trains on short and medium distances in Germany. Unlike its long-distance counterpart, DB Fernverkehr, it does not operate trains on its own account. Traffic is ordered and paid for by the Bundesländer (states) or their Landkreise (counties). Competition for those state-sponsored services is somewhat more fierce than for long-distance services. Some states have awarded long-term contracts to DB Regio (usually 10 to 15 years). DB Regio rail services are divided into several regional companies:

The bus services consist of 25 bus companies, which have subsidiary companies themselves.

DB Stadtverkehr was responsible for commuter services of the Berlin and Hamburg S-Bahn networks and numerous bus companies. The subsidiary was integrated into DB Regio on 31 December 2010. The two S-Bahn networks handled and still handle over 500 million passengers annually.[16]

DB Schenker is the logistics arm of DB, as of 2008 it employed over 88,000 people, and was the largest European rail freight company.[17] 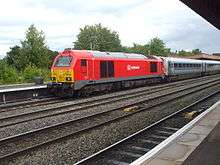 DB also has interests abroad, owning the United Kingdom's largest rail freight operator, DB Cargo UK, which also operates the British Royal Train[18] and also has interests in Eastern Europe. It is possible to obtain train times for any journey in Europe from Deutsche Bahn's website.[19]

Trans-Eurasia Logistics is a joint venture with Russian Railways (RŽD) that operates container freight trains between Germany and China via Russia.

These are the following train categories offered by DB, sorted after stop frequency (low to high):[20]

Train categories no longer used include:

There are several other operators in Germany which might offer other categories, also, a local transport authority or tariff associations might call the trains in a different way than DB does. For example, in the Nuremberg region and formally also in the Hamburger Verkehrsverbund region, RE and RB trains are not differentiated, but called R instead. In some regions, such as Verkehrsverbund Berlin-Brandenburg, private operators do use the RE and RB labels, in others, such as Saxony, they do not. In online and print information systems of DB, private trains officially labelled RB and RE by their operators, might get a different label, for example "ABR" for trains operated by Abellio, though on platforms, trains and maps or timetables issued by the local transport authority overseeing regional train services, these abbreviations usually do not appear.