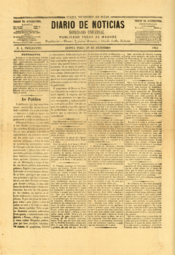 Diário de Notícias was first published in Lisbon on 29 December 1864 by Tomás Quintino Antunes and Eduardo Coelho.[1][2] At its early phase the paper had no explicit political stance and financially relied on the advertisements.[1][3] Its headquarters is in Lisbon.[4] During the 1880s the novelist Eça de Queiroz, then stationed in England in the Portuguese diplomatic service, contributed occasional "London letters" to the newspaper. Some of these were afterwards published in a book entitled Cartas de Inglaterra.

Before the Carnation revolution Diário de Notícias belonged to the Empresa Nacional de Publicidade.[5] Following the Carnation revolution, the paper was nationalized and later privatized in the early 1990s.[5] Then the paper and Jornal de Notícias were sold to the Lusomundo group.[5][6] Both papers are now owned by Global Media Group (formerly Controlinveste Media).[7][8]