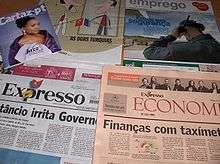 Expresso (Portuguese pronunciation: [(ɐi̯)ˈʃpɾɛsu]) is the flagship publication of the Group Impresa and is published weekly in Lisbon, Portugal.

Expresso was first published on 6 January 1973.[1][2] The founder was Francisco Pinto Balsemão.[3][4] The paper is based in Lisbon[3] and is published on a weekly basis.[5] The newspaper is part of the Portuguese company Impresa,[6][7] which also controls various magazines, including Caras and Visão, among the others.[8]

A weekly newspaper, it incorporates various supplements, covering general news, business, sports, international news, entertainment, society, a magazine, recruitment and real estate classified supplements, as well as having a site on the Internet. It is particularly known for its editorial independence and its probing political reporting, making it a newspaper of reference.

The Prémio Pessoa is a notable Portuguese award instituted in 1987 by Expresso and the Unisys Company. It is one of the most reputed prizes awarded in Portugal, named after the poet Fernando Pessoa. In 1980 Expresso, in partnership with SDG – Simuladores e Modelos de Gestão – created the Global Management Challenge, a strategic management competition for university students.