"The Valkyrie" redirects here. For other uses, see Valkyrie (disambiguation).

Die Walküre (The Valkyrie), WWV 86B, is a music drama in three acts by Richard Wagner with a German libretto by the composer. It is the second of the four works that form Wagner's cycle Der Ring des Nibelungen (The Ring of the Nibelung).

The story of Die Walküre is based on the Norse mythology told in the Volsunga Saga and the Poetic Edda.[1][2] In Norse mythology, a valkyrie is one in a group of female figures who decide which soldiers die in battle and which live. Die Walküre's best-known excerpt is the "Ride of the Valkyries".

It received its premiere at the Königliches Hof- und National-Theater in Munich on 26 June 1870. Wagner originally intended the work to be premiered as part of the entire cycle, but was forced to allow the performance at the insistence of his patron King Ludwig II of Bavaria. It was first presented as part of the complete cycle on 14 August 1876 at Wagner's Bayreuth Festival. The work made its United States premiere at the Academy of Music in New York on 2 April 1877.[3]

Wagner intermingled development of the text of these last two planned operas, i.e. Die Walküre, originally entitled Siegmund und Sieglinde: der Walküre Bestrafung ("Siegmund and Sieglinde: the Valkyrie's Punishment") and what became Das Rheingold. Wagner had first written of his intention to create a trilogy of operas in the August 1851 draft of "Eine Mittheilung an meine Freunde" (A Communication to My Friends), but did not produce any sketches of the plot of Siegmund and Sieglinde until November. The following summer, Wagner and his wife rented the Pension Rinderknecht, a pied-à-terre on the Zürichberg (now Hochstrasse 56–58 in Zürich). There he worked on the prose draft of Die Walküre, an extended description of the story including dialogue between 17 and 26 May 1852 and the verse draft between 1 June and 1 July. It was between these drafts that Wagner decided not to introduce Wotan in act 1, instead leaving the sword the god had been going to bring on stage already embedded in the tree before the action starts.[4] The fair copy of the text was completed by 15 December 1852.

Even before the text of the Ring was finalised, Wagner had begun to sketch some of the music. On 23 July 1851 he wrote down on a loose sheet of paper what was to become the best-known leitmotif in the entire cycle: the theme from the "Ride of the Valkyries" (Walkürenritt). Other early sketches for Die Walküre were made in the summer of 1852. But it was not until 28 June 1854 that Wagner began to transform these into a complete draft of all three acts of the opera. This preliminary draft (Gesamtentwurf) was completed by 27 December 1854. Much of the work of this stage of development of the opera overlapped with work on the final orchestral version of Das Rheingold.

As Wagner had included some indication of the orchestration in the draft, he decided to move straight on to developing a full orchestral score in January 1855 without bothering to write an intermediate instrumentation draft as he had done for Das Rheingold. This was a decision he was soon to regret, as numerous interruptions including a four-month visit to London made the task of orchestrating more difficult than he had expected. If he allowed too much time to elapse between the initial drafting of a passage and its later elaboration, he found that he could not remember how he had intended to orchestrate the draft. Consequently, some passages had to be composed again from scratch. Wagner, nevertheless, persevered with the task and the full score was finally completed on 20 March 1856. The fair copy was begun on 14 July 1855 in the Swiss resort of Seelisberg, where Wagner and his wife spent a month. It was completed in Zürich on 23 March 1856, just three days after the completion of the full score. 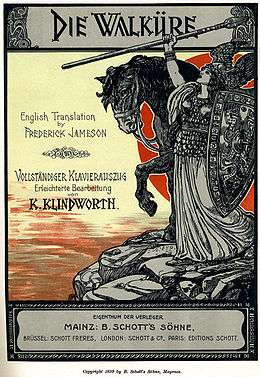 Brünnhilde at the rock, title page art from the 1899 Schott's vocal score. 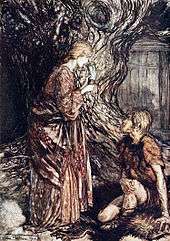 During a raging storm, Siegmund seeks shelter at the house of the warrior Hunding. Hunding is not present, and Siegmund is greeted by Sieglinde, Hunding's unhappy wife. Siegmund tells her that he is fleeing from enemies. After taking a drink of mead, he moves to leave, claiming to be cursed by misfortune. But Sieglinde bids him stay, saying he can bring no misfortune to the "house where ill luck lives".

Returning, Hunding reluctantly offers Siegmund the hospitality demanded by custom. Sieglinde, increasingly fascinated by the visitor, urges him to tell his tale. Siegmund describes returning home with his father one day to find his mother dead and his twin sister abducted. He then wandered with his father until he was parted from him as well. One day he found a girl being forced into marriage and fought with the girl's relatives. His weapons were broken and the bride was killed, and he was forced to flee to Hunding's home. Initially Siegmund does not reveal his name, choosing to call himself Wehwalt, 'filled with woe'.

When Siegmund finishes, Hunding reveals that he is one of Siegmund's pursuers. He grants Siegmund a night's stay, but they are to do battle in the morning. Hunding leaves the room with Sieglinde, ignoring his wife's distress. Siegmund laments his misfortune, recalling his father's promise that he would find a sword when he most needed it. 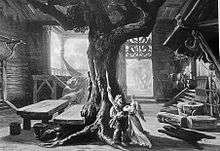 Sieglinde returns, having drugged Hunding's drink to send him into a deep sleep. She reveals that she was forced into a marriage with Hunding. During their wedding feast, an old man appeared and plunged a sword into the trunk of the ash tree in the center of the room, which neither Hunding nor any of his companions could remove. She expresses her longing for the hero who could draw the sword and save her. Siegmund expresses his love for her, which she reciprocates, and as she strives to understand her recognition of him, she realises it is in the echo of her own voice, and reflection of her image, that she already knows him. When he speaks the name of his father, Wälse, she declares that he is Siegmund, and that the Wanderer left the sword for him.

Siegmund now easily draws the sword forth, and she tells him she is Sieglinde, his twin sister. He names the blade "Nothung" (or needful, for this is the weapon that he needs for his forthcoming fight with Hunding). As the act closes he calls her "bride and sister", and draws her to him with passionate fervour.

Wotan is standing on a rocky mountainside with Brünnhilde, his Valkyrie daughter. He instructs Brünnhilde to protect Siegmund in his coming fight with Hunding. Fricka, Wotan's wife and the guardian of wedlock, arrives demanding the punishment of Siegmund and Sieglinde, who have committed adultery and incest. She knows that Wotan, disguised as the mortal man Wälse, fathered Siegmund and Sieglinde. Wotan protests that he requires a free hero (i.e., one not ruled by Wotan and not bound to respect Wotan's contracts) to aid his plans, but Fricka retorts that Siegmund is not a free hero but Wotan's creature and unwitting pawn. Backed into a corner, Wotan promises Fricka that Siegmund will die. 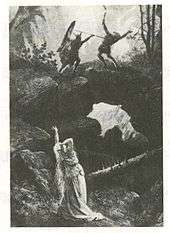 Fricka exits, leaving Brünnhilde with a despairing Wotan. Wotan explains his problems: troubled by the warning delivered by Erda (at the end of Das Rheingold), he had seduced the earth-goddess to learn more of the prophesied doom; Brünnhilde was born to him by Erda. He raised Brünnhilde and eight other daughters as the Valkyries, warrior maidens who gather the souls of fallen heroes to form an army against Alberich. Valhalla's army will fail if Alberich should ever wield the ring, which is in Fafner's possession. The giant has transformed himself into a dragon, lurking in a forest with the Nibelung treasure. Wotan cannot wrest the ring from Fafner, who is bound to him by contract; he needs a free hero to defeat Fafner in his stead. But as Fricka pointed out, he can create only thralls (i.e. servants) to himself. Bitterly, Wotan orders Brünnhilde to obey Fricka and grant victory to Hunding in his battle with Wotan's beloved son Siegmund.

Having fled Hunding's hall, Siegmund and Sieglinde enter the mountain pass, where Sieglinde faints in guilt and exhaustion. Brünnhilde approaches Siegmund and tells him of his impending death. Siegmund refuses to follow Brünnhilde to Valhalla when she tells him Sieglinde cannot accompany him there. Siegmund dismisses Brünnhilde's warning since he has Wälse's sword, which his father assured him would win victory for him, but Brünnhilde tells him it has lost its power. Siegmund draws his sword and threatens to kill both Sieglinde and himself. Impressed by his passion, Brünnhilde relents and agrees to grant victory to Siegmund instead of Hunding.

Hunding arrives and attacks Siegmund. Blessed by Brünnhilde, Siegmund begins to overpower Hunding, but Wotan appears and shatters Nothung (Siegmund's sword) with his spear. While Siegmund is thus disarmed and helpless, Hunding stabs him to death. Wotan looks down on Siegmund's body, grieving, and Brünnhilde gathers up the fragments of Nothung and flees on horseback with Sieglinde. Wotan strikes Hunding dead with a contemptuous gesture, and angrily sets out in pursuit of his disobedient daughter.

The other Valkyries assemble on the summit of a mountain, each with a dead hero in her saddlebag. They are astonished when Brünnhilde arrives with Sieglinde, a human woman. She begs them to help, but they dare not defy Wotan. Sieglinde, in her grief over Siegmund's death, tells Brünnhilde that she no longer wishes to live. Brünnhilde tells her that she is pregnant by Siegmund, and urges her to remain alive for the child's sake, and to name the child Siegfried. Brünnhilde gives the fragments of Nothung to Sieglinde, and resolves to delay Wotan while Sieglinde escapes.

Wotan arrives in wrath and passes judgement on Brünnhilde: she is to be stripped of her Valkyrie status and become a mortal woman, to be held in a magic sleep on the mountain, prey to any man who happens by. Dismayed, the other Valkyries flee. Brünnhilde begs mercy of Wotan for herself, his favorite child. She recounts the courage of Siegmund and her decision to protect him, knowing that was Wotan's true desire. With the words 'Der diese Liebe mir ins Herz gehaucht' (He who breathed this love into me), introducing the key of E major, she identifies her actions as Wotan's true will. Wotan consents to her last request: to encircle the mountaintop with magic flame, which will deter all but the bravest of heroes (who, as shown through the leitmotif, they both know will be the yet unborn Siegfried). Wotan lays Brünnhilde down on a rock and, in a long embrace, kisses her eyes closed into an enchanted sleep. He summons Loge (the Norse demigod of fire) to ignite the circle of flame that will protect her, then slowly departs in sorrow, after pronouncing: "Whosoever fears the point of my spear shall not pass through the fire." The curtain falls as the Magic Fire Music again resolves into E major.