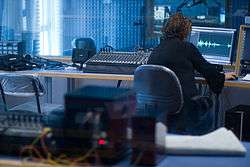 Audio editing software is software which allows editing and generating of audio data. Audio editing software can be implemented completely or partly as library, as computer application, as Web application or as a loadable kernel module. Wave Editors are digital audio editors and there are many sources of software available to perform this function. Most can edit music, apply effects and filters, adjust stereo channels etc.

A digital audio workstation (DAW) consists of software to a great degree, and usually is composed of many distinct software suite components, giving access to them through a unified graphical user interface using GTK+, Qt or some other library for the GUI widgets.

For use with music

Editors designed for use with music typically allow the user to do the following:

Typically these tasks can be performed in a manner that is non-linear. Audio editors may process the audio data non-destructively in real-time, or destructively as an "off-line" process, or a hybrid with some real-time effects and some off-line effects.

Comparison of destructive and real-time editing

Destructive editing modifies the data of the original audio file, as opposed to just editing its playback parameters. Destructive editors are also known as "sample editors".

Destructive editing applies edits and processing directly to the audio data, changing the data immediately. If, for example, part of a track is deleted, the "deleted" audio data is immediately removed from that part of the track.

Real-time editing does not apply changes immediately, but applies edits and processing on the fly during playback. If, for example, part of a track is deleted, the "deleted" audio data is not actually removed from the track, but is hidden and will be skipped on playback.

For use with speech

Editors designed for use in speech research add the ability to make measurements and perform acoustic analyses such as extracting and displaying a fundamental frequency contour or spectrogram. They typically lack most or all of the effects of interest to musicians.