Flanging /ˈflændʒɪŋ/ is an audio effect produced by mixing two identical signals together, one signal delayed by a small and gradually changing period, usually smaller than 20 milliseconds. This produces a swept comb filter effect: peaks and notches are produced in the resulting frequency spectrum, related to each other in a linear harmonic series. Varying the time delay causes these to sweep up and down the frequency spectrum. A flanger is an effects unit that creates this effect.

Part of the output signal is usually fed back to the input (a "re-circulating delay line"), producing a resonance effect which further enhances the intensity of the peaks and troughs. The phase of the fed-back signal is sometimes inverted, producing another variation on the flanging sound.

As an audio effect, a listener hears a "drainpipe" or "swoosh" or "jet plane" sweeping effect as shifting sum-and-difference harmonics are created analogous to use of a variable notch filter. The term "flanging" comes from one of the early methods of producing the effect. The finished music track is recorded simultaneously to two matching tape machines, then replayed with both decks in sync. The playback-head output from the two recorders is mixed to a third recorder. The engineer slows down one recorder by lightly pressing a finger on the flange (rim) of one of the playout reels. The "drainpipe" or subtle "swoosh" 'flange flango' effect "sweeps" in one direction, and the playback of that recorder remains slightly behind the other when the finger is removed. By pressing a finger on the flange of the other deck, the effect sweeps back in the other direction as the decks progress towards being in sync. The Beatles' producer George Martin has disputed this "reel flange" source, instead attributing the term to John Lennon (see Martin's account below.)

Older recording hardware could suffer flanging as a side effect when recording long tracks. As the weight of the tape built on one reel, the pressure on the capstans caused flanging in mixdown or dubbing. This was a problem faced by studio engineers in the sixties and seventies when recording large concept pieces, as explained by Ian Anderson of Jethro Tull when recounting the studio challenges of recording Thick as a Brick.

Despite subsequent claims over who originated flanging, Les Paul discovered the effect in the late 1940s and 1950s; however, he did most of his early phasing experiments with acetate disks on variable-speed record players. His 1955 single "Nuevo Laredo" features phase shifting,[1] as does the 1953 single "Mammy's Boogie." [2]

American music industry veterans David S. Gold and Stan Ross, founders of Gold Star Studios in Hollywood, claim they made the first commercial recording—the single "The Big Hurt" by Toni Fisher—at Gold Star in late 1959 and a hit in the United States in early 1960, rising to #3 on Billboard magazine's singles chart. Flanging is also heard in the opening of The Ventures' 1962 cover of The Tornados' "Telstar", in a rocket launch sound effect.

Further development of the classic effect is attributed to Ken Townsend, an engineer at EMI's Abbey Road Studio, who devised the process in the spring of 1966. Tired of laboriously re-recording dual vocal tracks, John Lennon asked Townsend if there was some way for the Beatles to get the sound of double-tracked vocals without doing the work. Townsend devised Artificial Double Tracking or ADT. According to historian Mark Lewisohn, it was Lennon who first called the technique "flanging". Lennon asked George Martin to explain how ADT worked, and Martin answered with the nonsense explanation "Now listen, it's very simple. We take the original image and we split it through a double vibrocated sploshing flange with double negative feedback".[3] Lennon thought Martin was joking. Martin replied, "Well, let's flange it again and see". From that point, when Lennon wanted ADT he would ask for his voice to be flanged, or call out for "Ken's flanger". According to Lewisohn, the Beatles' influence meant the term "flanging" is still in use today, more than 40 years later. The first Beatles track to feature flanging was "Tomorrow Never Knows" from Revolver, which was recorded on April 6, 1966. When Revolver was released on August 5, 1966, almost every song had been subjected to flanging.[4]

Others have attributed it to George Chkiantz, an engineer at Olympic Studios in Barnes, London. One of the first instances on a pop recording was The Small Faces' 1967 single "Itchycoo Park",[5] recorded at Olympic and engineered by Chkiantz's colleague Glyn Johns.

The first stereo flanging is credited to producer Eddie Kramer, in the coda of Jimi Hendrix's "Bold as Love" (1967). Kramer said in the 1990s that he read BBC Radiophonic Workshop journals for ideas and circuit diagrams. 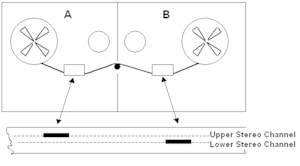 In 1968, the record producer for The Litter, Warren Kendrick, devised a method to precisely control flanging by placing two 15 IPS (inches per second) stereo Ampex tape recorders side by side.[6] The take-up reel of recorder A and supply reel of B were disabled, as were channel 2 of recorder A, channel 1 of recorder B and the erase head of recorder B. The tape was fed left-to-right across both recorders and an identical signal was recorded on each channel of the tape, but displaced by approximately 18 inches along the length of the tape. During recording, an ordinary screwdriver was wedged between the recorders to make the tape run "uphill" and "downhill." The same configuration was employed during the playback/mixdown to a third recorder. The screwdriver was moved back and forth to cause the two signals to diverge, then converge. The latter technique permits zero point flanging; i.e., the lagging signal crosses over the leading signal and the signals change places.

The original tape-flanging effect sounds a little different from electronic and software recreations. Not only is the tape-flanging signal time-delayed, but response characteristics at different frequencies of the tape and tape heads introduced phase shifts into the signals as well. Thus, while the peaks and troughs of the comb filter are more or less in a linear harmonic series, there is a significant non-linear behaviour too, causing the timbre of tape-flanging to sound more like a combination of what came to be known as flanging and phasing.

Also known as "infinite flanging", this sonic illusion is similar to the Shepard tone effect, and is equivalent to an auditory "barber pole".[7] The sweep of the flanged sound seems to move in only one direction ("up" or "down") infinitely, instead of sweeping back-and-forth. While Shepard tones are created by generating a cascade of tones, fading in and out while sweeping the pitch either up or down, barber pole flanging uses a cascade of multiple delay lines, fading each one into the mix and fading it out as it sweeps to the delay time limit. The effect is available on various hardware and software effect systems.[8][9]

Spectrograms of Phasing and Flanging effects

This flanging is one specific type of phase-shifting or "phasing". In phasing, the signal is passed through one or more all-pass filters which have non-linear phase response, and then added back to the original signal. This results in constructive and destructive interference that varies with frequency, giving a series of peaks and troughs in the frequency response of the system. In general, the position of these peaks and troughs do not occur in a harmonic series.

In both phasing and flanging, the characteristics (phase response and time delay, respectively) are generally varied in time, leading to an audible sweeping effect.

To the ear, flanging and phasing sound similar, yet they are recognizable as distinct colorations.

Commonly, flanging is referred to as having a "jet plane-like" characteristic. In order for the comb filter effect to be audible, the spectral content of the program material must be full enough within the frequency range of this moving comb filter to reveal the filter’s effect. It is more apparent when it is applied to material with a rich harmonic content, and is most obvious when applied to a white noise or similar noise signal.

If the frequency response of this effect is plotted on a graph, the trace resembles a comb, and so is called a comb filter.

This audio file was created from a revision of the "Flanging" article dated 2007-09-14, and does not reflect subsequent edits to the article. (Audio help)
More spoken articles
This article is issued from Wikipedia - version of the 11/19/2016. The text is available under the Creative Commons Attribution/Share Alike but additional terms may apply for the media files.