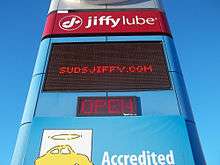 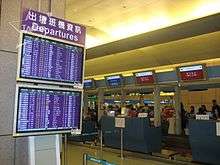 Digital signage is a sub segment of signage. Digital signages use technologies such as LCD, LED and Projection to display content such as digital images, video, streaming media, and information. They can be found in public spaces, transportation systems, museums, stadiums, retail stores, hotels, restaurants, and corporate buildings etc., to provide wayfinding, exhibitions, marketing and outdoor advertising. Digital Signage market is expected to grow from USD $15 billion to over USD $24bn by 2020.[1]

Traditionally content designs have been created by small, specialist firms. However they are often seen to be expensive and have uncertain ROI.[2] More recently, digital content is created easily and flexibly via a Content Management System. This means that new messages are created from a creative inventory of audio, video, image, graphics, words and phrases which assembled in different combinations and permutations to yield new messages in real-time.

Digital content displayed on the signage is presented in one of the following formats:

Video clip of a digital sign in Dearborn, MI, USA

Since digital signage content may be frequently updated using content management systems, and also because of the interactive abilities available through the accompanying employment of real-world interfaces such as embedded touch screens, movement detection and image capture devices which enable these forms of signage to understand who and how users are interacting with them, they are gaining acceptance as an alternative to static signage.

Digital audiovisual (av) content is reproduced on TVs and monitor displays of a digital sign network from at least one media player (usually a small computer unit, but DVD players and other types of media sources may also be used). Various hardware and software options exist, providing a range of different ways to schedule and playback content. These range from simple, non-networked portable media players that can output basic JPG slide shows or loops of MPEG-2 video to complex networks consisting of multiple players and servers that offer control over enterprise-wide or campus-wide displays at many venues from a single location. The former are ideal for small groups of displays that can be updated via USB flash drive, SD card or CD-ROM. Another option is the use of D.A.N. (Digital Advertising Network) players that connect directly to the monitor and to the internet, to a WAN (Wide Area Network), or to a LAN (Local Area Network). This allows the end user the ability to manage multiple D.A.N. players from any location. The end user can create new advertising or edit existing advertisements and then upload changes to the D.A.N. via the internet or other networking options.

Developments in web services have meant the APIs for some digital sign software now allow for customized content management interfaces through which end-users can manage their content from one location, in a way which suits their requirements.

More advanced digital sign software allows content to be automatically created by the media players (computers) and servers on a minute-by-minute basis, combining real-time data, from news, to weather and prices, transport schedules, etc., with av content to produce the most up-to-date content.[4]

One specific use of digital signage is for out-of-home advertising in which video content, advertisements, and/or messages are displayed on digital signs with the goal of delivering targeted messages, to specific locations and/or consumers, at specific times. This is often called "digital out of home" (DOOH)H.[5][6]

Digital signs can interact with mobile phones using SMS messaging and Bluetooth. SMS can be used to post messages on the displays, while Bluetooth allows users to interact directly with what they see on screen. In addition to mobile interactivity, networks are also using technology that integrates social and location-based media interactivity. This technology enables end users to upload photos and messages to social networks such as Twitter and Facebook as well as text messages to the displays.

The wide spread of smartphones lead to the development of screen–smart device interaction technologies. These allow smartphone users to interact directly with the digital signage screen, for example participate in a poll, play a game, or share social network content.

As the name suggests, context-aware digital signage leverages a number of technologies such as sensors, cameras, beacons, RFID technologies, software programs and network connectivity including the Internet of Things (IoT) to monitor the ambient environment, process information in real time, and deliver highly relevant promotional messages based on an interpretation of environmental cues.[7] Many of the newer context-aware digital signage products are fitted with cameras and gather shopper demographic data by estimating the age, gender and social class of passers-by and use this information to update signage as well as to provide users with back-end analytics and shopper profiles.

New technologies for digital sign are being developed, such as three-dimensional (3D) screens, with or without 3D glasses (see Anaglyph image and Autostereoscopy), 'holographic displays',[8] water screens and fog screens.[9]

While the term "digital sign" has taken hold throughout most of the world, some companies and organizations prefer to use the terms "narrowcasting", "screen media", "place-based media", "digital merchandising", "digital media networks", "digital out-of-home" or "captive audience networks". The term Digital Signage was first coined in early 1992 when a network of videowalls in UK Shopping Centres run by Neil Longuet-Higgins of ProQuip and Centre Network Television was referred to as a digital sign by a security guard who did not understand the term Videowall. Neil Longuet-Higgins from SIS Digital was then the first to use this term to promote the nationwide network of 'Digital Signage'. The Out-of-Home Advertising Association of America (OAAA) defines digital billboards those that “offer static messages that rotate every few seconds with typically six to eight advertisers sharing the same location".[10] Digital signage is evolving so rapidly that even the OAAA definition appears to be outmoded given that interactive digital signage and context-aware digital signage is anything but static.

Digital Signage Market size is forecast to be worth USD 23.02 billion by 2023; as per a new research report by Global Market Insights, Inc. Lower paper wastage coupled with LED backlit panel integration has led to significant energy savings, driving digital signage market growth. The emergence of Internet of Things (IoT) has the potential to transform the technology from mere content displayers to a hub capable of collecting operational data via cloud computing.

China currently leads the world in the number of digital sign displays deployed and number of NASDAQ IPOs. Total revenue from the digital sign equipment market in the United States – including hardware, software, installation, and maintenance—is expected to grow by about 33% in 2009.[11] Another source for information on digital sign displays and impressions (the number of times a viewer reads/views digital sign), is a report provided by Nielsen, the "4th Screen Network Audience Report". In it Nielsen identifies that digital screens in the "fourth screen" category in the US generated over 237 million monthly exposures to persons 18 years or older. The report identifies Screenvision, NCM, Captivate, GSTV and IndoorDirect as among the companies that are leaders in the fourth screen category. One of the leading digital sign companies in movie theaters is Screenvision, with over 14,400 screens in the US; another leader in the "fourth screen" marketplace is GSTV (Gas Station TV), which reportedly generates over 32 million digital sign impressions every month. Nielsen estimates these 237 million+ exposures translate into more than half (54%) of the adult population being exposed to a place-based video ad during the period measured.[12]

Digital signs are used for many different purposes and there is no definitive list. However, below are some of the most common applications of digital sign: 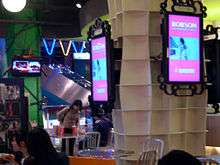 Digital signage in the Warner Village Cinemas in Taipei 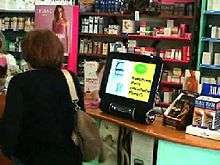 Digital signage in a pharmacy store

Digital sign displays may be LCD or plasma screens, LED boards, projection screens or other emerging display types like interactive surfaces or organic LED screens (OLEDs). Rapidly dropping prices for large plasma and LCD screens have led to a growing increase in the number of digital sign installations.[15] An array of these displays is known as a video wall.

Digital signage displays use content management systems and digital media distribution systems which can either be run from personal computers and servers or regional/national media hosting providers. In many digital sign applications, content must be regularly updated to ensure that the correct messages are being displayed. This can either be done manually as and when needed, through a scheduling system, using a data feed from a content provider (e.g. Canadian Press, Data Call Technologies, Bloomberg LP, Thomson Reuters, AHN), or an in-house data source.

JPEG images and MPEG4 videos remain the dominant digital content formats for the digital signage industry. For interactive content, HTML5 and Unity3D are widely used due to their popularity among web developers and multimedia designers.

There are a number of technologies which are hoped to have improve standardisation and interoperability of the digital Signage industry, such as SMIL and POPAI. POPAI has released several digital sign standards[16] to promote "interoperability between different providers". The objective of these standards documents is to establish a foundation of performance and behavior that all digital sign systems can follow.