This article is about analog component video. For the processing of color components in digital video, see Digital video, Chroma subsampling, and YCbCr.
Not to be confused with Composite video. 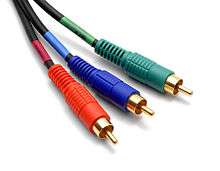 Three cables, each with RCA plugs at both ends, are often used to carry YPbPr analog component video.

Component video is a video signal that has been split into two or more component channels. In popular use, it refers to a type of component analog video (CAV) information that is transmitted or stored as three separate signals. Component video can be contrasted with composite video (NTSC, PAL or SECAM) in which all the video information is combined into a single line level signal that is used in analog television. Like composite, component-video cables do not carry audio and are often paired with audio cables.

Reproducing a video signal on a display device (for example, a cathode ray tube (CRT)) is a straightforward process complicated by the multitude of signal sources. DVD, VHS, computers and video game consoles all store, process and transmit video signals using different methods, and often each will provide more than one signal option. One way of maintaining signal clarity is by separating the components of a video signal so that they do not interfere with each other. A signal separated in this way is called "component video". S-Video, RGB and YPBPR signals comprise two or more separate signals, and thus are all component-video signals. In the past, for most consumer-level applications, analog component video was used; however, digital component video became increasingly more common in both computer and home-theater applications. Component video is capable of carrying various signals, such as 480i, 480p, 576i, 576p, 720p, 1080i, 1080p, 2160p and beyond. Many new high definition TVs support the use of component video up to their native resolution. 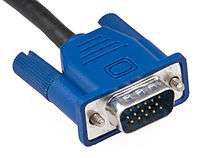 A 15-pin VGA connector for a personal computer 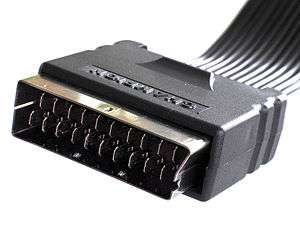 The various RGB (red, green, blue) analog component video standards (e.g., RGBS, RGBHV, RGsB) use no compression and impose no real limit on color depth or resolution, but require large bandwidth to carry the signal and contain much redundant data since each channel typically includes much of the same black-and-white image. Most modern computers offer this signal via a VGA port. Many televisions, especially in Europe, utilize RGB via the SCART connector. All arcade games, other than early vector and black-and-white games, use RGB monitors.

RGB component video has largely been replaced by modern digital formats, such as DisplayPort or Digital Visual Interface (DVI) digital connections, while home theater systems increasingly favor High-Definition Multimedia Interface (HDMI), which support higher resolutions, higher dynamic range, and can be made to support digital rights management. The demise of VGA is largely due to screens moving to large flat digital panels as well as the desire for having a single cable for both audio and video but also due to a slight loss of clarity when converting from a digital media source to analogue and back again for a flat digital display, particularly when used at higher resolutions where analog signals are highly susceptible to noise. RGB has never been common in North America for consumer electronics as S-Video was considered sufficient for consumer use, although RGB was used extensively in commercial, professional and high-end installations.

Composite sync is common in the European SCART connection scheme (using pins 17 [ground] and 19 [composite-out] or 20 [composite-in]). RGBS requires four wires – red, green, blue and sync. If separate cables are used, the sync cable is usually colored yellow (as is the standard for composite video) or white.

Separate sync is most common with VGA, used worldwide for analog computer monitors. This is sometimes known as RGBHV, as the horizontal and vertical synchronization pulses are sent in separate channels. This mode requires five conductors. If separate cables are used, the sync lines are usually yellow (H) and white (V), yellow (H) and black (V), or gray (H) and black (V).

Sync on Green (SoG) is less common, and while some VGA monitors support it, most do not. Sony is a big proponent of SoG, and most of their monitors (and their PlayStation line of video game consoles) use it. Like devices that use composite video or S-video, SoG devices require additional circuitry to remove the sync signal from the green line. A monitor that is not equipped to handle SoG will display an image with an extreme green tint, if any image at all, when given a SoG input.

Sync on red and sync on blue are even rarer than sync on green, and are typically used only in certain specialized equipment.

Sync on luma is much similar to sync on composite, but uses the Y signal from S-Video instead of a composite video signal. This is sometimes used on SCART, since both composite video and S-Video luma ride along the same pins. This generally does not suffer from the same checkerboard issue as sync on composite, and is generally acceptable on devices that do not feature composite sync, such as the Sony PlayStation and some modded Nintendo 64 models. 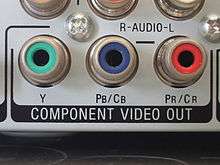 YPBPR component video out on a consumer electronics device

Further types of component analog video signals do not use separate red, green and blue components but rather a colorless component, termed luma, which provides brightness information (as in black-and-white video). This combines with one or more color-carrying components, termed chroma, that give only color information. Both the S-Video component video output (two separate signals) and the YPBPR component video output (three separate signals) seen on DVD players are examples of this method.

Converting video into luma and chroma allows for chroma subsampling, a method used by JPEG and MPEG compression schemes to reduce the storage requirements for images and video (respectively).

When used for connecting a video source to a video display where both support 4:3 and 16:9 display formats, the PAL television standard provides for signaling pulses that will automatically switch the display from one format to the other.

Since component video does not undergo the encoding process, the color quality is noticeably better than composite video.[1]

Component video connectors are not unique in that the same connectors are used for several different standards; hence, making a component video connection often does not lead to a satisfactory video signal being transferred. Many DVD players and TVs may need to be set to indicate the type of input/output being used, and if set incorrectly the image may not be properly displayed. Progressive scan, for example, is often not enabled by default, even when component video output is selected.