This article is about the geometry term. For other uses, see Dihedral. 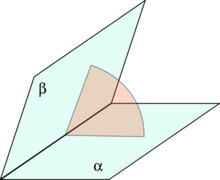 Angle between two planes (α, β, green) in a third plane (pink) which cuts the line of intersection at right angles

A dihedral angle is an angle between two intersecting planes on a third plane perpendicular to the line of intersection.[2]

A torsion angle[3] is a particular example of a dihedral angle, used in stereochemistry to define the geometric relation of two parts of a molecule joined by a chemical bond. 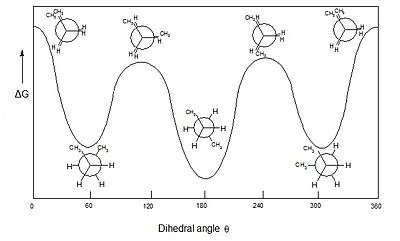 Free energy diagram of butane as a function of dihedral angle. 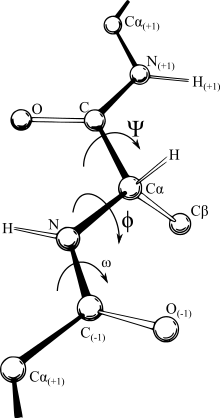 In a protein chain three dihedral angles are defined as φ (phi), ψ (psi) and ω (omega), as shown in the diagram. The planarity of the peptide bond usually restricts ω to be 180° (the typical trans case) or 0° (the rare cis case). The distance between the Cα atoms in the trans and cis isomers is approximately 3.8 and 2.9 Å, respectively. The cis isomer is mainly observed in Xaa–Pro peptide bonds (where Xaa is any amino acid).

The sidechain dihedral angles tend to cluster near 180°, 60°, and −60°, which are called the trans, gauche+, and gauche− conformations. The stability of certain sidechain dihedral angles is affected by the values φ and ψ.[7] For instance, there are direct steric interactions between the Cγ of the side chain in the gauche+ rotamer and the backbone nitrogen of the next residue when ψ is near -60°.[8]

Calculation of a dihedral angle

the dihedral angle, φ between them is given by:

An alternative method is to calculate the angle between the vectors, nA and nB, which are normal to the planes..

Every polyhedron, regular and irregular, convex and concave, has a dihedral angle at every edge.

Every dihedral angle in an edge-transitive polyhedron has the same value. This includes the 5 Platonic solids, the 4 Kepler–Poinsot polyhedra, the two quasiregular solids, and two quasiregular dual solids.

Given 3 faces of a polyhedron which meet at a common vertex P and have edges AP, BP and CP, the dihedral angle between the faces containing APC and BPC is:[10]

Converting from dihedral angles to Cartesian coordinates in chains

It is common to represent polymers backbones, notably proteins, in internal coordinates; that is, a list of consecutive dihedral angles and bond lengths. In computational structure optimization, programs flip back and forth between representations during their iterations. This can dominate the calculation time of the potential itself and in long chain molecules introduce cumulative numerical inaccuracy. While all conversion algorithms produce mathematically identical results, they differ in speed and numerical accuracy.[11] A review of algorithmic implementation of such inversions (comparing Quaternions, Rodriguze-gibbs, and sNerf) finds the fastest and most accurate torsion to Cartesian conversion is the Natural Extension Reference Frame (NERF) method.[11]