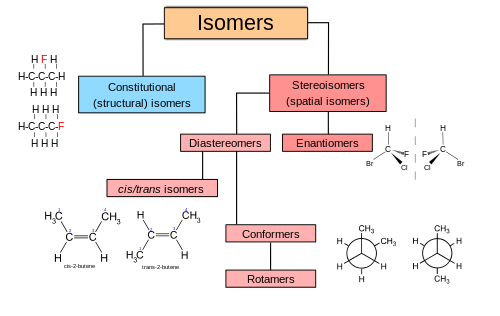 The different types of isomers. Stereochemistry focuses on stereoisomers

Stereochemistry is also known as 3D chemistry because the prefix "stereo-" means "three-dimensionality".[2]

Louis Pasteur could rightly be described as the first stereochemist, having observed in 1849 that salts of tartaric acid collected from wine production vessels could rotate plane polarized light, but that salts from other sources did not. This property, the only physical property in which the two types of tartrate salts differed, is due to optical isomerism. In 1874, Jacobus Henricus van 't Hoff and Joseph Le Bel explained optical activity in terms of the tetrahedral arrangement of the atoms bound to carbon. 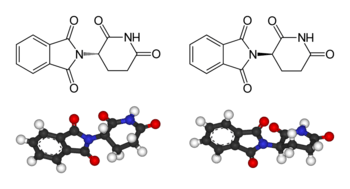 An often cited example of the importance of stereochemistry relates to the thalidomide disaster. Thalidomide is a pharmaceutical drug, first prepared in 1957 in Germany, prescribed for treating morning sickness in pregnant women. The drug was discovered to be teratogenic, causing serious genetic damage to early embryonic growth and development, leading to limb deformation in babies. Some of the several proposed mechanisms of teratogenecity involve a different biological function for the (R)- and the (S)-thalidomide enantiomers.[3] In the human body however, thalidomide undergoes racemization: even if only one of the two enantiomers is administered as a drug, the other enantiomer is produced as a result of metabolism.[4] Accordingly, it is incorrect to state that one of the stereoisomer is safe while the other is teratogenic.[5] Thalidomide is currently used for the treatment of other diseases, notably cancer and leprosy. Strict regulations and controls have been enabled to avoid its use by pregnant women and prevent developmental deformations. This disaster was a driving force behind requiring strict testing of drugs before making them available to the public.

Torsional strain results from resistance to twisting about a bond.