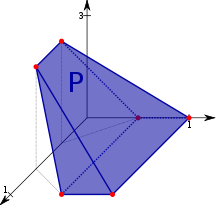 A convex polytope is a special case of a polytope, having the additional property that it is also a convex set of points in the n-dimensional space Rn.[1] Some authors use the terms "convex polytope" and "convex polyhedron" interchangeably, while others prefer to draw a distinction between the notions of a polyhedron and a polytope.

In addition, some texts require a polytope to be a bounded set, while others[2] (including this article) allow polytopes to be unbounded. The terms "bounded/unbounded convex polytope" will be used below whenever the boundedness is critical to the discussed issue. Yet other texts treat a convex n-polytope as a surface or (n-1)-manifold.

Convex polytopes play an important role both in various branches of mathematics and in applied areas, most notably in linear programming.

A comprehensive and influential book in the subject, called Convex Polytopes, was published in 1967 by Branko Grünbaum. In 2003 the 2nd edition of the book was published, with significant additional material contributed by new writers.[1]

In Grünbaum's book, and in some other texts in discrete geometry, convex polytopes are often simply called "polytopes". Grünbaum points out that this is solely to avoid the endless repetition of the word "convex", and that the discussion should throughout be understood as applying only to the convex variety.

A convex polytope may be defined in a number of ways, depending on what is more suitable for the problem at hand. Grünbaum's definition is in terms of a convex set of points in space. Other important definitions are: as the intersection of half-spaces (half-space representation) and as the convex hull of a set of points (vertex representation).

In his book Convex polytopes, Grünbaum defines a convex polytope as a compact convex set with a finite number of extreme points:

A set K of Rn is convex if, for each pair of distinct points a, b in K, the closed segment with endpoints a and b is contained within K.

This is equivalent to defining a bounded convex polytope as the convex hull of a finite set of points, where the finite set must contain the set of extreme points of the polytope. Such a definition is called a vertex representation (V-representation or V-description).[1] For a compact convex polytope, the minimal V-description is unique and it is given by the set of the vertices of the polytope.[1]

A closed half-space can be written as a linear inequality:[1]

where n is the dimension of the space containing the polytope under consideration. Hence, a closed convex polytope may be regarded as the set of solutions to the system of linear inequalities:

where m is the number of half-spaces defining the polytope. This can be concisely written as the matrix inequality:

An open convex polytope is defined in the same way, with strict inequalities used in the formulas instead of the non-strict ones.

The foregoing definition assumes that the polytope is full-dimensional. If it is not, then the solution of Ax ≤ b lies in a proper affine subspace of Rn and discussion of the polytope may be constrained to this subspace.

In general the intersection of arbitrary half-spaces need not be bounded. However if one wishes to have a definition equivalent to that as a convex hull, then bounding must be explicitly required.

The finite basis theorem[2] is an extension of the notion of V-description to include infinite polytopes. The theorem states that a convex polyhedron is the convex sum of its vertices plus the conical sum of the direction vectors of its infinite edges.

Every (bounded) convex polytope is the image of a simplex, as every point is a convex combination of the (finitely many) vertices. However, polytopes are not in general isomorphic to simplices. This is in contrast to the case of vector spaces and linear combinations, every finite-dimensional vector space being not only an image of, but in fact isomorphic to, Euclidean space of some dimension (or analog over other fields).

Given a convex polytope P defined by the matrix inequality 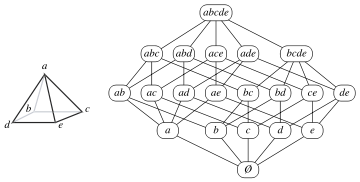 The face lattice of a square pyramid, drawn as a Hasse diagram; each face in the lattice is labeled by its vertex set.

In general, an (n − j)-dimensional face satisfies equality in j specific rows of A. These rows form a basis of the face. Geometrically speaking, this means that the face is the set of points on the polytope that lie in the intersection of j of the polytope's bounding hyperplanes.

The faces of a convex polytope thus form an Eulerian lattice called its face lattice, where the partial ordering is by set containment of faces. The definition of a face given above allows both the polytope itself and the empty set to be considered as faces, ensuring that every pair of faces has a join and a meet in the face lattice. The whole polytope is the unique maximum element of the lattice, and the empty set, considered to be a (−1)-dimensional face (a null polytope) of every polytope, is the unique minimum element of the lattice.

Two polytopes are called combinatorially isomorphic if their face lattices are isomorphic.

The polytope graph (polytopal graph, graph of the polytope, 1-skeleton) is the set of vertices and edges of the polytope only, ignoring higher-dimensional faces. For instance, a polyhedral graph is the polytope graph of a three-dimensional polytope. By a result of Whitney[3] the face lattice of a three-dimensional polytope is determined by its graph. The same is true for simple polytopes of arbitrary dimension (Blind & Mani-Levitska 1987, proving a conjecture of Micha Perles).[4] Kalai (1988)[5] gives a simple proof based on unique sink orientations. Because these polytopes' face lattices are determined by their graphs, the problem of deciding whether two three-dimensional or simple convex polytopes are combinatorially isomorphic can be formulated equivalently as a special case of the graph isomorphism problem. However, it is also possible to translate these problems in the opposite direction, showing that polytope isomorphism testing is graph-isomorphism complete.[6]

A convex polytope can be decomposed into a simplicial complex, or union of simplices, satisfying certain properties.

Given a convex r-dimensional polytope P, a subset of its vertices containing (r+1) affinely independent points defines an r-simplex. It is possible to form a collection of subsets such that the union of the corresponding simplices is equal to P, and the intersection of any two simplices is either empty or a lower-dimensional simplex. This simplicial decomposition is the basis of many methods for computing the volume of a convex polytope, since the volume of a simplex is easily given by a formula.[8]

Algorithmic problems for a convex polytope

In the planar case, i.e., for a convex polygon, both facet and vertex enumeration problems amount to the ordering vertices (resp. edges) around the convex hull. It is a trivial task when the convex polygon is specified in a traditional for polygons way, i.e., by the ordered sequence of its vertices

. When the input list of vertices (or edges) is unordered, the time complexity of the problems becomes O(m log m).[9] A matching lower bound is known in the algebraic decision tree model of computation.[10]