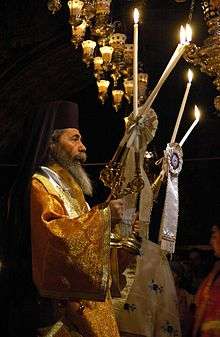 Patriarch Theophilus III of Jerusalem blessing with dikirion and trikirion.

Dikirion (Greek: δικήριον or δίκηρον) and trikirion (τρικήριον or τρίκηρον) are liturgical candlesticks, used by a bishop of the Eastern Orthodox and the Eastern Catholic Churches to bless the clergy and faithful. The words mean "dual candle" and "triple candle", respectively, and may also be called by the combined Greek form (in plural), δικηροτρίκηρα, dikērotríkēra.

The candlesticks are often quite ornate . The bishop holds the trikirion in his right hand and the dikirion in his left and makes the sign of the cross with both . 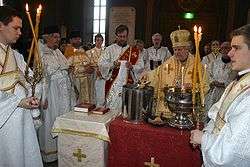 Trikirion (left) and dikirion (right), being held by subdeacons during the blessing of holy water.

Both dikirion and trikirion have a flat base, so that they may stand upright. Above this base is a vertical shaft terminating in candleholders. The dikirion holds two candles, representing the dual nature of Jesus, and the trikirion holds three, representing the three persons of the Holy Trinity. The candleholders are mounted at an angle so that the candles cross each other. Sometimes in the Russian tradition, the candles are shaped when inserted into their holders so that the separate candles meet and then bend upwards to burn with a single flame. A particularly fancy variation on this has the candles merge in a double and triple spiral. In other traditions, the candles are tied together with ribbons at the point of intersection.

During a hierarchical Divine Liturgy, the dikirion and trikirion are kept respectively on the top left and right corners of the Holy Table (altar) or on stands placed next to these corners. When they are needed by the bishop, they are carried to him by subdeacons, who may also carry them during the Entrances. One of them may be carried by the deacon during the censing by the bishop or by one of the subdeacons during the censing by the deacon.

Among the Ukrainian Eastern Christians (Russian Orthodox, Ukrainian Orthodox and Ukrainian Catholic), it is common for the priest or bishop to use a large three-branch candle for the Great Blessing of Waters on the Great Feast of Theophany (Epiphany).

This article is issued from Wikipedia - version of the 5/17/2014. The text is available under the Creative Commons Attribution/Share Alike but additional terms may apply for the media files.