Incarnation literally means embodied in flesh or taking on flesh. It refers to the conception and birth of a sentient being who is the material manifestation of an entity, god or force whose original nature is immaterial. In its religious context the word is used to mean the descent from Heaven of a god, or divine being in human/animal form on Earth.

The Pharaohs of Ancient Egypt were sometimes said to be incarnations of the sun gods Horus and Ra.

In the Bahá'í Faith, God is described as a single, imperishable God, the creator of all things, including all the creatures and forces in the universe. The connection between God and the world is that of the creator to his creation.[1] God is understood to be independent of his creation, and that creation is dependent and contingent on God. God, however, is not seen to be incarnated into this world and is not seen to be part of creation as he cannot be divided and does not descend to the condition of his creatures. Instead, in the Bahá'í understanding, the world of creation emanates from God, in that all things have been realized by him and have attained to existence.[2] The Bahá'í concept of the intermediary between God and humanity is expressed in the term Manifestation of God, which are a series of personages, such as Jesus and Bahá'u'lláh, who reflect the attributes of the divine into the human world for the progress and advancement of human morals and civilization.[3] In expressing God's intent, these Manifestations are seen to establish religion in the world.[3] The Manifestations of God are also not seen as an incarnation of God, but are instead understood to be like a perfect mirror reflecting the attributes of God onto this material world.[3][4]

Buddhism is a non-theistic religion, it denies the concept of a creator god or any incarnation of a creator god. Buddhism, however, does teach the rebirth doctrine and asserts that living beings are reborn, endlessly, reincarnating as Devas (gods), demi-gods, human beings, animals, hungry ghosts or hellish beings,[5] in a cycle of samsara that stops only for those who reach nirvana (nibbana).[6][7][8]

In Tibetan Buddhism, an enlightened spiritual teacher (lama) is believed to reincarnate, and is called a tulku. According to Tulku Thondup,[9] there are three main types of tulkus. They are the emanations of buddhas, the manifestations of highly accomplished adepts, and rebirths of highly virtuous teachers or spiritual friends. There are also authentic secondary types as well which include unrecognized tulkus, blessed tulkus, and tulkus fallen from the path. 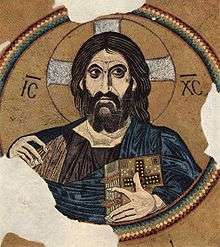 The incarnation of Christ is a central Christian doctrine that God became flesh, assumed a human nature, and became a man in the form of Jesus, the Son of God and the second person of the Trinity. This foundational Christian position holds that the divine nature of the Son of God was perfectly united with human nature in one divine Person, Jesus, making him both truly God and truly man. The theological term for this is hypostatic union: the Second Person of the Trinity, God the Son, became flesh when he was miraculously conceived in the womb of the Virgin Mary.[10] Biblical passages traditionally referenced in connection with the doctrine of the Incarnation include John 1:14, Colossians 2:9, and Philippians 2:7-8. 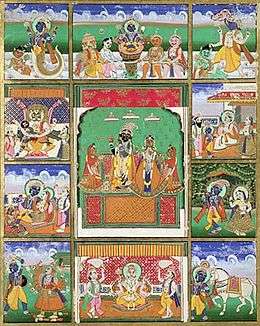 In Hinduism, incarnation refers to its rebirth doctrine, and in its theistic traditions to avatar.[11] Avatar literally means "descent, alight, to make one's appearance",[12] and refers to the embodiment of the essence of a superhuman being or a deity in another form.[13] The word also implies "to overcome, to remove, to bring down, to cross something".[12] In Hindu traditions, the "crossing or coming down" is symbolism, states Daniel Bassuk, of the divine descent from "eternity into the temporal realm, from unconditioned to the conditioned, from infinitude to finitude".[14] An avatar, states Justin Edwards Abbott, is a saguna (with form, attributes) embodiment of the nirguna Brahman or Atman (soul).[15]

Neither the Vedas nor the Principal Upanishads ever mention the word avatar as a noun.[14] The verb roots and form, such as avatarana, do appear in ancient post-Vedic Hindu texts, but as "action of descending", but not as an incarnated person (avatara).[16] The related verb avatarana is, states Paul Hacker, used with double meaning, one as action of the divine descending, another as "laying down the burden of man" suffering from the forces of evil.[16]

The term is most commonly found in the context of the Hindu god Vishnu.[12][17] The earliest mention of Vishnu manifested in a human form to empower the good and fight against evil, uses other terms such as the word sambhavāmi in verse 4.6 and the word tanu in verse 9.11 of the Bhagavad Gita,[18] as well as other words such as akriti and rupa elsewhere.[19] It is in medieval era texts, those composed after the sixth century CE, that the noun version of avatar appears, where it means embodiment of a deity.[20] The incarnation idea proliferates thereafter, in the Puranic stories for many deities, and with ideas such as ansha-avatar or partial embodiments.[18][17]

While Avatars of other deities such as Ganesha and Shiva are also mentioned in medieval Hindu texts, this is minor and occasional.[21] The incarnation doctrine is one of the important differences between Vaishnavism and Shaivism traditions of Hinduism.[22][23]

The translation of avatar as "incarnation" has been questioned by Christian theologists, who state that an incarnation is in flesh and imperfect, while avatar is mythical and perfect.[24][25] The theological concept of Christ as an incarnation, as found in Christology, presents the Christian concept of incarnation. This, state Oduyoye and Vroom, is different from the Hindu concept of avatar because avatars in Hinduism are unreal and is similar to Docetism.[26] Sheth disagrees and states that this claim is an incorrect understanding of the Hindu concept of avatar.[27][note 1] Avatars are true embodiments of spiritual perfection, one driven by noble goals, in Hindu traditions such as Vaishnavism.[27]

Mainstream Islam completely rejects the doctrine of the incarnation of God in any form, as the concept is defined as shirk. In mainstream Islam God is one and "neither begets nor is begotten".[29]

Mainstream Judaism totally rejects any doctrine of an incarnation of God and absolutely rejects any concept of an incarnation of God in any form.[30] For example, some Jews in the Middle Ages, rejected vehemently - even under penalty of death or threats of torture - the Christian idea of Jesus as a divine incarnation of God, and see Jesus neither as a prophet nor messiah. However, some Hasidim believe in a somewhat similar concept. Menachem Mendel Schneerson, a prominent Hasidic leader, said that the Rebbe is God's essence itself put into a body of a tzadik.[31]

Serer religion rejects any notion of an incarnation or manifestation of Roog (the supreme deity in Serer religion), called Koox among the Cangin. However, the reincarnation (ciiɗ)[32] of the ancient Serer saints and ancestral spirits, called Pangool, is a well held principle in Serer religion. These Pangool (singular : Fangool) act as intermediaries between the living world and the Devine. When the Serers speak of incarnation, it is these Pangool they refer to, who are themselves holy by virtue of their intercession with the Divine.[32][33][34]