Saint Dimitry of Rostov (sometimes Latinized as Demetrius, sometimes referred to simply as Dmitri Rostovsky, Russian: Димитрий Ростовский) was a leading opponent of the Caesaropapist reform of the Russian Orthodox church promoted by Feofan Prokopovich. He is representative of the strong Ukrainian influence upon the Russian Orthodox Church at the turn of the 17th and 18th centuries.

Demetrius is sometimes credited as composer or compiler of the first Russian opera, the lengthy Rostov Mysteries of 1705, though the exact nature of this work, as well as its place in history, is open to debate.[2]

Born Daniil Savvich Tuptalo (or Tuptalenko, according to some sources) into a Cossack family in 1651. Soon thereafter his family moved to Kiev, and he entered the Kievo-Mohyla Academy at the age of 11. On 9 July 1668 he took his religious vows at St. Cyril's Monastery in Kiev and was given the monastic name of Dimitry (after Saint Demetrius of Thessalonika). After a brief period in Chernigov, Dimitry went to venerate the Byzantine Slavic Christian shrines of Belarus (at the time property of the Byzantine Rite Belarusian and Ukrainian Catholic metropolitans of the Uniate churches), still located in the Polish-Lithuanian Commonwealth at that time. In 1678 he returned from Vilno to Baturyn and settled at the court of the hetman Ivan Samoylovych.

During the 1680s, Dimitry lived mostly at the Kiev Pechersk Lavra, while his sermons against hard drinking and lax morals made his name known all over Russia. He was appointed hegumen (superior) of several major monasteries of Ukraine, but concentrated his attention upon the ambitious project of integrating all the lives of Russian saints into a single work, which he published as Monthly Readings (Четьи-минеи) or Menologion in 1684-1705. He also found time to study ecclesiastical history of the Russian Orthodox Church. 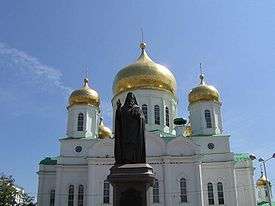 Statue of St. Dimitry of Rostov in front of the Rostov-on-Don cathedral.

In 1701 Dimitry was appointed Metropolitan of Siberia but, pleading ill health, preferred to stay in Moscow until he was invested with the archbishopric of Rostov. During his life in Russia, Dimitry opposed both the Old Believers' and Peter the Great's ecclesiastical policies, gradually drifting towards the party of Eudoxia Lopukhina and Tsarevich Alexis. He also made invaluable contributions to the Russian education, opening a school and a small theatre in Rostov, where his own plays could be staged.

Dimitry was also active as a composer, although his musical education is undocumented aside from the standard music curriculum established by Feofan Prokopovich at the Kiev-Mohyla Academy. Many of his Penitential Psalms achieved wide circulation, not only in the Ukraine but in the Balkans too, and many have become an integral part of Ukrainian folk-song tradition through the kobzari, itinerant blind singers.

Dimitry is credited as composer or compiler of the first Russian opera, the six-hour-long Rostov Mysteries of 1705. Though this has been staged, notably by Boris Pokrovsky's Moscow Chamber Musical Theatre, in Moscow and at the Brighton Festival (1993), it may best be judged an oratorio on the lives of Russian saints. Its basis is the "Cheti-Minei" (Четьи-Минеи), published in four volumes in 1689, 1690, 1700 and 1705[3] — the same source that inspired Pushkin in 1825 to write Boris Godunov.

Upon Dimitry's death on October 28, 1709 his relics were placed at St. Jacob's Monastery, which his followers would rebuild as Dimitry's shrine. A fortress on the Don River was named after him; today it is known as Rostov-on-the-Don.

This article incorporates material from the public domain 1906 Brockhaus and Efron Encyclopedic Dictionary.