Initially the title was applied to the head of any monastery. After 1874, when the Russian monasteries were secularized and classified into three classes, the title of hegumen was reserved only for the lowest, third class. The head of a monastery of the second or first class holds the rank of archimandrite. In the Greek Catholic Church, the head of all monasteries in a certain territory is called the protohegumen.

The duties of both hegumen and archimandrite are the same, archimandrite being considered the senior dignity of the two. In the Russian Orthodox Church the title of Hegumen may be granted as an honorary title to any hieromonk, even one who does not head a monastery. 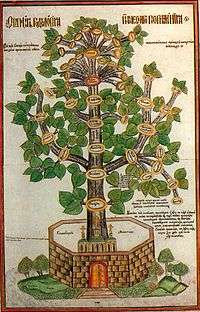 "Family Tree of the Solovetsky Monastery". A hand-drawn lubok listing the names of the monastery's hegumens (1870s).

A ruling hegumen is formally installed in a ceremony by the bishop, during which he is presented with his pastoral staff (Greek: paterissa, Slavonic: палица, palitza). Among the Russians, the pastoral staff for a Hegumen tends to be of wood (usually ebony), rather than metal. The hegumen is awarded the gold pectoral cross by the bishop, as for an archpriest. During divine services the hegumen wears a simple black monastic mantle, while the higher ranking archimandrite wears a mantle similar to one worn by a bishop (though without the white "rivers" along the sides, and decorated with unadorned "tablets" at the neck and feet). An archimandrite also wears a mitre similar to one worn by a bishop; a hegumen does not (however, in the Russian tradition, a bishop may grant an hegumen the privilege of wearing the mitre as an ecclesiastical award). A hegumen may carry his pastoral staff in processions and when giving blessings in the church (though it is never carried into the sanctuary), although it usually stands upright next to his kathisma (monastic choir stall). When outside the church, a hegumen may use a wooden walking stick similar to that used by a bishop or archimandrite, only not adorned with a silver knob.