The District Courts (Hindi: ज़िला न्यायालय) of India are the district courts of the State governments in India for every district or for one or more districts together taking into account the number of cases, population distribution in the district. They administer justice in India at a district level. Salary of civil Judge (Jr.Division) at Entry Level

Civil Judge (Jr. Division) get allowances. Allowance are paid by Government. It includes- 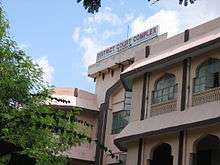 A court complex at Guntur.

However, the district judge has supervisory control over Additional and Assistant District Judges, including decisions on allocation of work among them. The District and Sessions judge is often referred to as "district judge" when he presides over civil matters and "sessions judge" when he presides over criminal matters.[2] Being the highest judge at district level, the District Judge also enjoys the power to manage the state funds allocated for the development of judiciary in the district.

The judges of subordinate courts are appointed by the Governor in consultation with the chief justice of the High Court of the concerned State. A minimum of seven years of practise as a lawyer at bar is a necessary qualification for direct entry level to become a District Judge upon a written examination and oral interview by a committee of High court judges, the appointment of district judges is notified by the state Government. This is referred to as direct recruitment. District judges are also appointed by way of elevation of judges from courts subordinate to district courts provided they fulfill the minimum years of service but unfortunately the entry level district judge exams have caused the judges on the lower rungs of the Judiciary to become lax as their chances of filling up posts for the work they had done may never fructify to promotions because of posts later being filled up by lawyers directly becoming district judges.

The next level of ascendancy for a district judge who served sufficient number of years is the post of High court judge. High court Judges are usually appointed from a pool of advocates practicing at the Bar of the High court and District Judges who served for sufficient number of years. This has also caused District Judges to wane in their efficiency as they have come to realize that elevation of lawyers directly to High Court Judges dampens their process of being awarded with promotions for the work they've put in over many years of service.

A district judge or Additional judge may be removed from his office by the state Government in consultation with the High court. By virtue of his office a district judge occupies a powerful position in the district but cannot be equated with the District Collector, also known as District Magistrate if such law and order powers are conferred on the District Collector. It is pertinent to mention here that a District Judge gets paid far more than a District Collector and is a senior position in the Judiciary which cannot be compared to the District Collector, also known as or also has powers of a District Magistrate conferred on him usually, which is an entry level post which is usually occupied by officers from the Indian Administrative Service. However it should be noted that the district collector, also a district magistrate if such powers are conferred on him, hardly has any power when it comes to Judicial matters and is mostly a revenue and administrative officer but is conferred some amount of law and order powers under the Criminal Procedure Code which is palpably questionable considering the view that law and order powers should normally be given to a police officer and not an officer who is mostly concerned with revenue and administrative duties.District collectors, also usually appointed as District Magistrates, do not have the plenary powers of even Judicial Magistrates of the Second Class in monitoring police investigations and putting people to trial.

The District Court or Additional District court exercises jurisdiction both on original side and appellate side in civil and criminal matters arising in the District. The territorial and pecuniary jurisdiction in civil matters is usually set in concerned state enactments on the subject of civil courts. On the criminal side, jurisdiction is exclusively derived from the criminal procedure code. As per this code the maximum sentence a Sessions Judge of district court may award to a convict is capital punishment.

Certain matters on criminal side or civil side cannot be tried by a lesser court than a district court. This gives the District Court original jurisdiction in such matters.

Appeals from the district courts lie to the High Court of the concerned state.