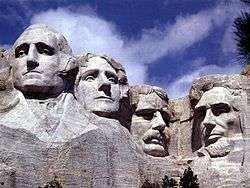 Jonah LeRoy "Doane" Robinson (October 19, 1856 – November 27, 1946[1]) was a state historian of South Dakota who conceived of the idea for the Mount Rushmore National Memorial.

Robinson was born in Sparta, Wisconsin. His sister could not pronounce his name (Jonah LeRoy), so she called him Doane. Robinson became a farmer in Minnesota, but soon abandoned the job to become a lawyer. Later, he took interest in history, and received the position as South Dakota's state historian. In that position, he conceived the idea of the Mt. Rushmore monument.

After reading about Stone Mountain, Robinson was suddenly inspired to sculpt the Needles, several pillars made of granite, into likenesses of famous people. He hoped that such a sculpture would attract greater tourism to South Dakota. After failing to contact Lorado Taft, who was ill, Robinson gained the support of Gutzon Borglum. He was also backed by Senator Peter Norbeck.

Robinson began efforts to raise funds for the project and to receive permission to carve the Needles. The funds were denied, and many groups including Native Americans disliked the idea. Environmentalist Cora Johnson of the Hot Springs Star felt that such a carving would destroy the landscape.

On Borglum’s second meeting with Robinson, Borglum switched the location of the carving from the Needles to Mount Rushmore. Borglum also decided that the sculptures should have a larger national focus, and he selected the four presidents. The headquarters of the project, south of Mount Rushmore, became known as Doane Mountain.

In 1929, president Calvin Coolidge finally signed a bill which created to a commission to oversee the sculpting. Robinson failed to become part of the commission, which greatly disappointed him.

Following his retirement from being a historian, he returned to farming, and lived to see the completion of Mount Rushmore. He died on November 27, 1946 in Pierre, South Dakota.[1]