The Doctrine of Fascism

"The Doctrine of Fascism" ("La dottrina del fascismo") is an essay attributed to Benito Mussolini. In truth, the first part of the essay, entitled "Idee Fondamentali" was written by philosopher Giovanni Gentile, while only the second part ("Dottrina politica e sociale") is the work of Mussolini himself.[1] It was first published in the Enciclopedia Italiana of 1932, as the first section of a lengthy entry on "Fascismo" (Fascism). The entire entry on Fascism spans pages 847–884 of the Enciclopedia Italiana, and includes numerous photographs and graphic images.

The Mussolini essay leads off the entry:

The second section of the essay is titled: "Dottrina Politica e sociale."

The Mussolini entry starts on page 847 and ends on 851 with the credit line "Benito Mussolini." All subsequent translations of "The Doctrine of Fascism" are from this work. 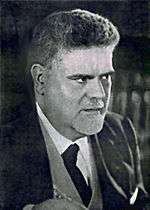 The philosopher Giovanni Gentile, who wrote the first part of the Dottrina

For if the nineteenth century was a century of individualism (Liberalism always signifying individualism) it may be expected that this will be a century of collectivism, and hence the century of the State. —Benito Mussolini, "The Political and Social Doctrine of Fascism,” Jane Soames authorized translation, Hogarth Press, London, 1933, p. 20.[2]

The Fascist conception of the State is all-embracing; outside of it no human or spiritual values can exist, much less have value. Thus understood, Fascism is totalitarian, and the Fascist State—a synthesis and a unit inclusive of all values—interprets, develops, and potentiates the whole life of a people. (p. 14)

Fascism is therefore opposed to Socialism to which unity within the State (which amalgamates classes into a single economic and ethical reality) is unknown, and which sees in history nothing but the class struggle. Fascism is likewise opposed to trade unionism as a class weapon, but when brought within the orbit of the State, Fascism recognises the real needs which gave rise to socialism and trade-unionism, giving them due weight in the guild or corporative system in which divergent interests are coordinated and harmonised in the unity of the State. (p.15)

Yet if anyone cares to read over the now crumbling minutes giving an account of the meetings at which the Italian Fasci di Combattimento were founded, he will find not a doctrine but a series of pointers… (p. 23)

It may be objected that this program implies a return to the guilds (corporazioni). No matter!... I therefore hope this assembly will accept the economic claims advanced by national syndicalism (sindacalismo). (p. 24)

Fascism [is] the precise negation of that doctrine which formed the basis of the so-called Scientific or Marxian Socialism. (p. 30)

After Socialism, Fascism attacks the whole complex of democratic ideologies and rejects them both in their theoretical premises and in their applications or practical manifestations. Fascism denies that the majority, through the mere fact of being a majority, can rule human societies; it denies that this majority can govern by means of a periodical consultation; it affirms the irremediable, fruitful and beneficent inequality of men, who cannot be levelled by such a mechanical and extrinsic fact as universal suffrage. (p. 31)

Fascism is definitely and absolutely opposed to the doctrines of liberalism, both in the political and economic sphere. (p. 32)

The Fascist State lays claim to rule in the economic field no less than in others; it makes its action felt throughout the length and breadth of the country by means of its corporate, social, and educational institutions, and all the political, economic, and spiritual forces of the nation, organised in their respective associations, circulate within the State. (p. 41).

The Corporate State and its Organization (p. 133)

State intervention in economic production arises only when private initiative is lacking or insufficient, or when the political interests of the State are involved. This intervention may take the form of control, assistance or direct management. (pp. 135-136)

"The Doctrine of Fascism"

"Fascism, the more it considers and observes the future and the development of humanity quite apart from political considerations of the moment, believes neither in the possibility nor the utility of perpetual peace. It thus repudiates the doctrine of Pacifism – born of a renunciation of the struggle and an act of cowardice in the face of sacrifice. War alone brings up to its highest tension all human energy and puts the stamp of nobility upon the peoples who have courage to meet it." —Mussolini

"First of all, as regards the future development of mankind, and quite apart from all present political considerations. Fascism does not, generally speaking, believe in the possibility or utility of perpetual peace. It therefore discards pacifism as a cloak for cowardly supine renunciation in contradistinction to self-sacrifice. War alone keys up all human energies to their maximum tension and sets the seal of nobility on those peoples who have the courage to face it." —Mussolini