Dorothy Walker Bush Koch, often called "Doro", (born August 18, 1959) is an American author and philanthropist.[1] She is the daughter of the 41st President of the United States George H. W. Bush and former First Lady Barbara Bush, and the youngest sibling of George W. Bush, the 43rd President. 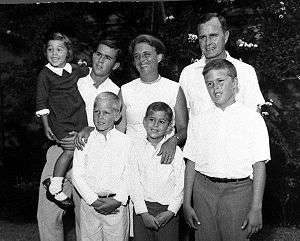 Bush Family in the early 1960s. Dorothy on far left.

Dorothy Walker Bush was born on August 18, 1959 in Harris County, Texas. Her father, George H. W. Bush, served as the 41st President of the United States and her mother, Barbara Bush, was the First Lady. She was named after her paternal grandmother, Dorothy Walker Bush. Her brother, George W. Bush, served as the 43rd President of the United States. Her other four siblings are Jeb Bush, Neil Bush, Marvin Bush, and Pauline Robinson Bush, who died of leukemia in 1953. Since she was a child, she has spent summers and holidays at the Bush compound, a sprawling estate in Kennebunkport, Maine.

She was educated at Miss Porter's School, a private all-girl college preparatory school in Farmington, Connecticut.

In 1975, during a visit to Beijing, she became the first person publicly baptized in the People's Republic of China since its government began discouraging foreign religious practices in 1949.[2]

She earned a Bachelor of Arts degree in sociology from Boston College in 1982.[3]

She serves as an event-organizer and fundraiser for charities and other non-profit organizations. She currently serves as co-chair of the Barbara Bush Foundation for Family Literacy along with her brother Jeb Bush. She has also served as a pioneer fundraiser for her brother's presidential campaigns.[4]

She is the author of the book My Father, My President: A Personal Account of the Life of George H.W. Bush.

She sponsored the commission of USS George H.W. Bush, her father's namesake. On January 10, 2009, she gave the first orders to the ship's company at Norfolk, Virginia.[5]

In June 1992, she married Robert P. Koch (b. 1960). The wedding took place at Camp David. They have two children, Robert David (b. 1993) and Georgia Grace (b. 1996). Robert P. Koch was an aide to House Democratic leader Richard Gephardt, and is a lobbyist and president of the Wine Institute.[7] He has a substantial equity interest in Central European Distribution Corp., a company that manufactures and distributes vodka in Poland.[8]

She resides in Bethesda, Maryland with her family.