GNU Dr. Geo is interactive geometry software that allows its users to design & manipulate interactive geometric sketches. It is free software (source code, translations, icons and installer are released under GNU GPL license), created by Hilaire Fernandes. It runs over a Morphic graphic system (which means that it runs on Linux, Mac OS, Windows, Android). Current version of Dr. Geo is also called Dr. Geo II. Historically Dr. Geo was developed in C++ and Dr. Geo II is a complete rewrite using Pharo that happened in 2005. This article refers to the most recent version.

Dr. Geo has several kinds of points: a free point, which can be moved with the mouse (but may be attached to a curve) and a point given by its coordinates.

Points can also be created as the intersection of 2 curves or as the midpoint of a segment.

Dr. Geo is equipped with the classic line, ray, segment and vector.

Other curvilinear objects include circles (defined by 2 points, a center and segment or a radius), arcs (defined by three points or center and angle), polygons (regular or not, defined by end points), and loci.

Besides the parallel and perpendicular line through a point, Dr. Geo can apply to a point or a line one of these transformations:

When some objects, called final depend on other objects, called initial, it is possible to create a complex construction deducing the final objects from the user-given initial objects. This is a macro-construction, a graph of interdependent objects.

Access to user programming is at the essence of Dr. Geo: from the software, the user can directly read, study, modify and redistribute modified version of Dr. Geo. Additionally, scripting embedded in sketch is proposed.

Dr. Geo is shipped with its source code and the developer tools. Therefore its code can be edited and recompiled from Dr. Geo while it is functioning. This design, inherited from Pharo Smalltalk, makes easy to test new ideas and new designs. 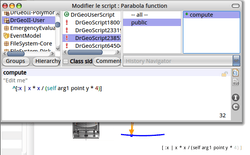 A script is a first class object defined along Dr. Geo code. It comes with zero, one or several arguments, from types selected when defining the script. When an instance of a script is plugged in a canvas, the user first selects its arguments in the canvas with mouse clicks, then the position in the canvas of the script output. The script is updated at each canvas computation. Scripts can be used in cascade, with one as the argument of another one.[1]

Curve and its tangent computed with Smalltalk script

Script are designed to be used in two different ways:

The computation of the script is done in its #compute method. For example, to calculate the square of a number, the script

creates a numeric object, whose value is the square of the argument number object. Whenever the first number is changed, the script returned value changes too.

Here is how Dr. Geo can create a Sierpinski triangle recursively: