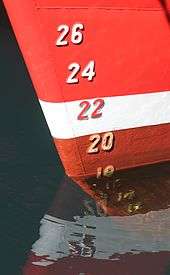 Draft marks on a ship's bow

The draft or draught of a ship's hull is the vertical distance between the waterline and the bottom of the hull (keel), with the thickness of the hull included; in the case of not being included the draft outline would be obtained. Draft determines the minimum depth of water a ship or boat can safely navigate. The draft can also be used to determine the weight of the cargo on board by calculating the total displacement of water and then using Archimedes' principle. A table made by the shipyard shows the water displacement for each draft. The density of the water (salt or fresh) and the content of the ship's bunkers has to be taken into account. The closely related term "trim" is defined as the difference between the forward and aft drafts.[1]

Drafts of a ship 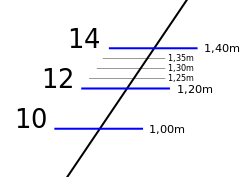 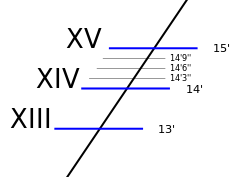 English system in Roman numeration of the bow scale 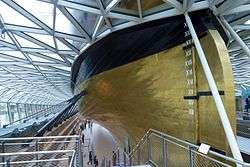 English system used on the stern of the Cutty Sark

Graphical representation of the dimensions used to describe a ship. Dimension "d" is the draft.

Variations of the draft

The draft of a ship can be affected by multiple factors, not considering the rise and fall of the ship by displacement:

The drafts are measured with a "banded" scale, from bow and to stern, and for some ships, the average perpendicular measurement is also used. The scale may use traditional English units or metric units. If the English system is used, the bottom of each marking is the draft in feet and markings are 6 inches high. In metric marking schemes, the bottom of each draft mark is the draft in decimeters and each mark is one decimeter high.

The implications of draft

Larger ships try to maintain an average water draft when they are light (without cargo), in order to make a better sea crossing and reduce the effects of the wind (high center of velic force). In order to achieve this they use sailing ballasts to stabilize the ship, following the unloading of cargo.

The water draft of a large ship has little direct link with its stability because stability depends solely on the respective positions of the metacenter of the hull and the center of gravity. It is also true however, that a "light" ship has quite high stability which can lead to implying too much rolling of the ship (due to memory). A fully laden ship (with a large draft) can have either a strong or weak stability, depending upon the manner by which the ship is loaded (height of the center of gravity).

The draft of ships can be increased when the ship is in motion in shallow water, a phenomenon known as squat (nautical term for the hydrodynamic effect of lower pressure pulling the ship down as it moves).

Draft is a significant factor limiting navigable waterways, especially for large vessels. Of course this includes many shallow coastal waters and reefs, but also some major shipping lanes. Panamax class ships—the largest ships able to transit the Panama Canal—do have a draft limit (and an "air draft" limit for passing under bridges) but are usually limited by beam, or sometimes length overall, for fitting into locks. However, in the much wider Suez Canal, the limiting factor for Suezmax ships is draft. Some supertankers are able to transit the Suez Canal when unladen or partially laden, but not when fully laden.

Canals are not the only draft-limited shipping lanes. A Malaccamax ship has the deepest draft able to transit the very busy but relatively shallow Strait of Malacca. There are only a few ships of this size.

A small draft allows pleasure boats to navigate through shallower water. This makes it possible for these boats to access smaller ports, to travel along rivers and even to 'beach' the boat.

A large draft ensures a good level of stability in strong wind, as the center of gravity is lower (ballast over the keel of the boat). For example: Ballasts placed very low in the keel of a boat such as a dragon boat with a draft of 1.20 m for a length of 8.90 m.

A boat like a catamaran can mitigate the problem by retrieving good stability in a small draft, but the width of the boat increases.

For submarines, which can submerge to different depths at sea, a term called keel depth is used, specifying the current distance from the water surface to the bottom of the submarine's keel. It is used in navigation to avoid underwater obstacles and hitting the ocean floor, and as a standard point on the submarine for depth measurements.

Submarines usually also have a specified draft used while operating on the surface, for navigating in harbors and at docks.