Not to be confused with Adema.
"Dropsy" redirects here. For other uses, see Dropsy (disambiguation).

Edema or œdema is an abnormal accumulation of fluid in the interstitium, located beneath the skin and in the cavities of the body, which can cause severe pain. Clinically, edema manifests as swelling. The amount of interstitial fluid is determined by the balance of fluid homeostasis; and the increased secretion of fluid into the interstitium, or the impaired removal of the fluid, can cause the condition. The word is from Greek οἴδημα oídēma meaning "swelling".[1]

Cutaneous edema is referred to as "pitting" when, after pressure is applied to a small area, the indentation persists after the release of the pressure. Peripheral pitting edema, as shown in the illustration, is the more common type, resulting from water retention. It can be caused by systemic diseases, pregnancy in some women, either directly or as a result of heart failure, or local conditions such as varicose veins, thrombophlebitis, insect bites, and dermatitis.

Non-pitting edema is observed when the indentation does not persist. It is associated with such conditions as lymphedema, lipedema, and myxedema.

Causes of edema which are generalized to the whole body can cause edema in multiple organs and peripherally. For example, severe heart failure can cause pulmonary edema, pleural effusions, ascites and peripheral edema. Such severe systemic edema is called anasarca. In rare cases, a Parvovirus B19 infection may cause generalized edemas.[4]

Although a low plasma oncotic pressure is widely cited for the edema of nephrotic syndrome, most physicians note that the edema may occur before there is any significant protein in the urine (proteinuria) or fall in plasma protein level. Most forms of nephrotic syndrome are due to biochemical and structural changes in the basement membrane of capillaries in the kidney glomeruli, and these changes occur, if to a lesser degree, in the vessels of most other tissues of the body. Thus the resulting increase in permeability that leads to protein in the urine can explain the edema if all other vessels are more permeable as well.[5]

As well as the previously mentioned conditions, edemas often occur during the late stages of pregnancy in some women. This is more common with those of a history of pulmonary problems or poor circulation also being intensified if arthritis is already present in that particular woman. Women that already have arthritic problems most often have to seek medical help for pain caused from over-reactive swelling. Edemas that occur during pregnancy are usually found in the lower part of the leg, usually from the calf down.

An edema will occur in specific organs as part of inflammations, tendonitis or pancreatitis, for instance. Certain organs develop edema through tissue specific mechanisms.

Examples of edema in specific organs:

Six factors can contribute to the formation of edema:

Generation of interstitial fluid is regulated by the forces of the Starling equation.[8] Hydrostatic pressure within blood vessels tends to cause water to filter out into the tissue. This leads to a difference in protein concentration between blood plasma and tissue. As a result, the colloidal or oncotic pressure of the higher level of protein in the plasma tends to draw water back into the blood vessels from the tissue. Starling's equation states that the rate of leakage of fluid is determined by the difference between the two forces and also by the permeability of the vessel wall to water, which determines the rate of flow for a given force imbalance. Most water leakage occurs in capillaries or post capillary venules, which have a semi-permeable membrane wall that allows water to pass more freely than protein. (The protein is said to be reflected and the efficiency of reflection is given by a reflection constant of up to 1.) If the gaps between the cells of the vessel wall open up then permeability to water is increased first, but as the gaps increase in size permeability to protein also increases with a fall in reflection coefficient.

Changes in the variables in Starling's equation can contribute to the formation of edemas either by an increase in hydrostatic pressure within the blood vessel, a decrease in the oncotic pressure within the blood vessel or an increase in vessel wall permeability. The latter has two effects. It allows water to flow more freely and it reduces the colloidal or oncotic pressure difference by allowing protein to leave the vessel more easily.

Vein obstruction causes facial edema while lying down to sleep. 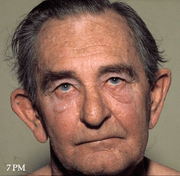 After being upright all day, the swelling disappears.

When possible, treatment involves resolving the underlying cause.

Treatment may also involve positioning the affected body parts to improve drainage. For example, swelling in feet or ankles may be reduced by having the person lie down in bed or sit with the feet propped up on cushions. Intermittent pneumatic compression can be used to pressurize tissue in a limb, forcing fluids to flow out of the pressurized area.