The United Nations Children's Fund (UNICEF; /ˈjuːnᵻsɛf/)[2] is a United Nations (UN) programme headquartered in New York City that provides humanitarian and developmental assistance to children and mothers in developing countries. It is one of the members of the United Nations Development Group and its executive committee.[3]

UNICEF was created by the United Nations General Assembly on 11 December 1946, to provide emergency food and healthcare to children in countries that had been devastated by World War II. The Polish physician Ludwik Rajchman is widely regarded as the founder of UNICEF and served as its first chairman from 1946. On Rajchman's suggestion, the American Maurice Pate was appointed its first executive director, serving from 1947 until his death in 1965.[4][5] In 1953, UNICEF's mandate was extended to address the needs of children in the developing world and became a permanent part of the United Nations System. At that time, the words "international" and "emergency" were dropped from the organization's name, making it simply the United Nations Children's Fund, or popularly known as "UNICEF".[6]

UNICEF relies on contributions from governments and private donors, UNICEF's total income for 2008 was US$3,372,540,239.[1] Governments contribute two-thirds of the organization's resources. Private groups and some six million individuals contribute the rest through national committees. It is estimated that 92 per cent of UNICEF revenue is distributed to programme services.[7] UNICEF's programmes emphasize developing community-level services to promote the health and well-being of children. UNICEF was awarded the Nobel Peace Prize in 1965 and the Prince of Asturias Award of Concord in 2006.

Most of UNICEF's work is in the field, with staff in over 190 countries and territories. More than 200 country offices carry out UNICEF's mission through programmes developed with host governments. Seven regional offices provide technical assistance to country offices as needed.

UNICEF's Supply Division is based in Copenhagen and serves as the primary point of distribution for such essential items as vaccines, antiretroviral medicines for children and mothers with HIV, nutritional supplements, emergency shelters, family reunification,and educational supplies. A 36 member executive board establishes policies, approves programmes and oversees administrative and financial plans. The executive board is made up of government representatives who are elected by the United Nations Economic and Social Council, usually for three-year terms. 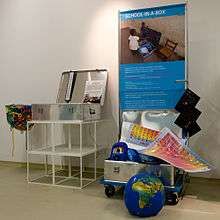 In the United States, Canada and some other countries, UNICEF is known for its "Trick-Or-Treat for UNICEF" programme in which children collect money for UNICEF from the houses they trick-or-treat on Halloween night, sometimes instead of candy.

UNICEF is present in 191 countries and territories around the world, but not involved in nine others (Bahamas, Brunei, Cyprus, Latvia, Liechtenstein, Malta, Mauritius, Monaco, and Singapore).[9]

Many people in developed countries first hear about UNICEF's work through the activities of one of the 36 National Committees for UNICEF. These non-governmental organizations (NGO) are primarily responsible for fundraising, selling UNICEF greeting cards and products, creating private and public partnerships, advocating for children's rights, and providing other support. The US Fund for UNICEF is the oldest of the national committees, founded in 1947.[10]

In 2009, the British retailer Tesco used "Change for Good" as advertising, which is trademarked by UNICEF for charity usage but not for commercial or retail use. This prompted the agency to say, "it is the first time in Unicef's history that a commercial entity has purposely set out to capitalise on one of our campaigns and subsequently damage an income stream which several of our programmes for children are dependent on". They went on to call on the public "who have children’s welfare at heart, to consider carefully who they support when making consumer choices".[15][16] On 7 September 2006, an agreement between UNICEF and the Spanish Catalan association football club FC Barcelona was reached whereby the club would donate 1.5 million Euros per year to the organization for five years. As part of the agreement, FC Barcelona will wear the UNICEF logo on the front of their uniform. This was the first time a football club sponsored an organization rather than the other way around. It was also the first time in FC Barcelona's history that they have had another organization's name across the front of their uniform.

The Swedish club Hammarby IF followed the Spanish and Canadian lead on 14 April 2007,[19] also raising funds for UNICEF and displaying the UNICEF name on their sportswear. The Danish football club Brøndby IF participated in a similar arrangement from 2008 to 2013.[20]

Australian A-League club Sydney FC announced they would also enter into a partnership with UNICEF raising funds for children in the Asia-Pacific region, and would also display the UNICEF logo for the remainder of the 2011-12 A-League season.[21]

In Botswana, UNICEF has funded the development of new state-of-the-art HIV/AIDS education for every schoolchild in Botswana from nonprofit organization TeachAIDS.[22]

UNICEF recently announced a landmark partnership with Scottish club Rangers F.C. UNICEF will partner the Rangers Charity Foundation and have pledged to raise £300,000 by 2011.[23]

In 2010, UNICEF created a partnership with Phi Iota Alpha, making them the first Greek Lettered Organization UNICEF has ever worked with. In 2011, Phi Iota Alpha raised over $20,000 for the Tap Project and the Trick or Treats for UNICEF Campaign.

In 2013, they agreed a contract with Greek association football champions Olympiacos F.C. who will don the organization's logo on the front of their shirts.

Since 1950, when a group of children in Philadelphia, Pennsylvania, donated $17 which they received on Halloween to help post-World War II victims, the Trick-or-Treat UNICEF box has become a tradition in North America during the fall.[24] These small orange boxes are handed to children at schools and other locations before 31 October. As of 2012, the Trick-or-Treat for UNICEF campaign has collected approximately CAD 91 million in Canada and over US$167 million in the U.S.[25]

In 1994, UNICEF held a summit encouraging animation studios around the world to create individual animated spots demonstrating the international rights of children. Cartoons for Children's Rights is the collection of animated shorts based on UNICEF’s Convention on the Rights of the Child.

To raise money to support its Education and Literacy Programmes, UNICEF collaborates with companies worldwide – international as well as small- and medium-sized businesses.

Since 2004, the organization has been supported by Montblanc, working collaboratively to help the world's children getting better access to education.[26]

According to Vaccine News Daily, Merck & Co. partnered with UNICEF in June 2013 to decrease maternal mortality, HIV and tuberculosis prevalence in South Africa. Merck's programme "Merck for Mothers" will give US$500 million worldwide for programmes that improve health for expectant mothers and their children.[27]

In May 2010, Crucell N.V. announced an additional US$110 million award from UNICEF to supply its pentavalent pediatric vaccine Quinvaxem to the developing world.[28]

UNICEF works directly with companies to improve their business practices, bringing them in line with obligations under international law, and ensuring that they respect children's rights in the realms of the marketplace, workplace, and the community. In 2012, UNICEF worked with Save the Children and The United Nations Global Compact to develop the Children's Rights and Business Principles and now these guidelines form the basis UNICEF's advice to companies. UNICEF works with companies seeking to improve their social sustainability by guiding them through a due diligence process where issues throughout their supply chain, such as child labour, can be identified and actions to ratify them are put in place.[29]

The Girl Star[30] project is a series of films which documents stories of girls from the most disadvantaged communities across five northern states in India who, through via education, have managed to break socio-economic constraints to make a success of their lives and become self-sufficient. These young women have grown to become role models in their communities, inspiring younger girls to go to school and continue their education. They have selected professions from the most conventional such as teaching and nursing, to the most unconventional like archery, bee-keeping, scrap management, often entering what has traditionally been a man’s domain.

UNICEF Ambassadors are leaders in the entertainment industry, representing the fields of film, television, music, sports and beyond. They help raise awareness of the needs of children, and use their talent and fame to fund-raise, advocate, and educate on behalf of UNICEF.[31]

One of the gates to the old UNICEF World Warehouse 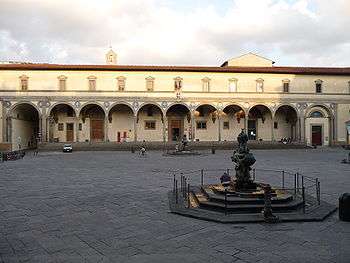 The UNICEF research centre in Florence

The old UNICEF World Warehouse is a large facility in Denmark, which hosts UNICEF deliverable goods as well as co-hosts emergency goods for United Nations High Commissioner for Refugees (UNHCR) and the International Federation of Red Cross and Red Crescent Societies (IFRC). Until 2012 the facilities was a 25,000m2 warehouse at Marmormolen in Copenhagen. With construction of a 45,000m2 UN City that is to house all UN activities in Copenhagen under one roof,[32] the warehouse service has been relocated to outer parts of the Freeport of Copenhagen. The facility houses the UNICEF Supply Division which manages strategic transport hubs in Dubai, Panama and Shanghai.[33] The warehouse contains a variety of items, e.g., food supplements, water purification tablets, dietary and vitamin supplements, and the "School in a box" (illustrated above).

The UNICEF Innocenti Research Centre in Florence, Italy, was established in 1988. The centre, formally known as the International Child Development Centre, has as its prime objectives to improve international understanding of issues relating to children's rights, to promote economic policies that advance the cause of children, and to help facilitate the full implementation of the United Nations Convention on the Rights of the Child in industrialized and developing countries.

It reaffirms the centre's academic freedom and the focus of IRC's research on knowledge gaps, emerging questions and sensitive issues which are relevant to the realization of children's rights, in developing and industrialized countries. It capitalizes on IRC's role as an interface between UNICEF field experience, international experts, research networks and policy makers and is designed to strengthen the centre's institutional collaboration with regional academic and policy institutions, pursuing the following goals:

Three interrelated strategies guide the achievement of these goals:

UNICEF has a policy preferring orphanages only be used as temporary accommodation for children when there is no alternative. UNICEF has historically opposed the creation of large-scale, permanent orphanages for children, preferring instead to find children places in their (extended) families and communities, wherever possible. This has led UNICEF to be sceptical of international adoption efforts as a solution to child care problems in developing countries; UNICEF has preferred to see children cared for in their birth countries rather than be adopted by foreign parents.[35][36]

Major news outlets such as US News have asserted UNICEF's intervention when giving large cash payments to developing countries to establish a regularized social welfare system to care for abandoned and orphaned children can lead to a cessation of international adoptions until all of its recommendations are in place, and have even labeled UNICEF a "villain" for the extent of its negative impact on orphans.[37] Elizabeth Bartholet and Paulo Barrozo have written in this context, encouraging adoption protocols to take on a more child-centric viewpoint.

One concern is that the child mortality rate has not decreased in some areas as rapidly as had been planned, especially in Sub-Saharan Africa, where in 2013 "the region still has the highest child mortality rate: 92 deaths per 1000 live births".[38] and that "Globally, nearly half of under-five deaths are attributable to undernutrition."

In 2005, Richard Horton editor-in-chief of The Lancet, editorialized that "over 60% of these deaths were and remain preventable" and that the coverage levels for these interventions are "appallingly low in the 42 countries that account for 90% of child deaths".[39]

Documents released by Edward Snowden in December 2013 showed that UNICEF was among the surveillance targets of British and American intelligence agencies.[40]