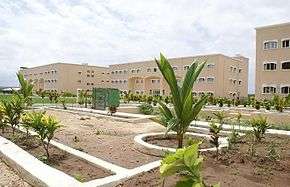 Education in Somalia refers to the academic system within Somalia. The Ministry of Education is officially responsible for education in Somalia, with about 15% of the nation's budget allocated to scholastic instruction. The autonomous Puntland and Somaliland macro-regions maintain their own Ministries of Education. Much of this article deals with the educational system of Puntland due to a dearth of detailed and up-to-date information from the other regions in Somalia. 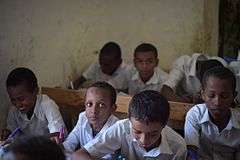 Children during a lesson at school in Barawe, Somalia.

Following the outbreak of the Somali Civil War in 1991, the task of running schools in Somalia was initially taken up by community education committees established in 94% of the local schools.[1] Numerous problems had arisen with regard to access to education in rural areas and along gender lines, quality of educational provisions, responsiveness of school curricula, educational standards and controls, management and planning capacity, and financing. To address these concerns, the Puntland government is in the process of developing an educational policy to guide the region's scholastic process as it embarks on the path of reconstruction and economic development. The latter includes a gender sensitive national education policy compliant with world standards, such as those outlined in the Convention on the Rights of the Child (CRC) and the Convention on the Elimination of All Forms of Discrimination against Women (CEDAW).[2] Examples of this and other educational measures at work are the government's enactment of legislation aimed at securing the educational interests of girls,[3] promoting the growth of an Early Childhood Development (ECD) program designed to reach parents and care-givers in their homes as well as in the ECD centers for 0-5 year old children,[4] and introducing incentive packages to encourage teachers to work in remote rural areas.[5]

Within the Puntland government, the Ministry of Education is responsible for developing and managing the region's educational needs.[6] It is headed by the Minister Mohamud Bile Dubbe, under whom a Vice Minister and Director General help oversee a Post-Primary Education Division (PPED) and a Basic Education Directorate (BED), among other boards.[7]

Early Childhood Development (ECD), as with primary education and non-formal education programs, falls within the category of basic education and entails the essential skills of literacy and numeracy upon which further learning is built. Qur'anic education also forms a component of ECD. ECD is offered to children in the 0-5 age bracket, with the focus on stimulating and developing the cognitive, affective and psycho-motor skills of the toddler and his/her holistic development. It also prepares children for school and facilitates the transition from home to primary school.[8]

Primary education features nine compulsory subjects: Arabic, Islamic studies, Somali, mathematics (including business education), science (health, environmental education, and agriculture), social studies (including history, geography and civics), English, physical education and arts and crafts. Lower and upper primary students are taught for 36 and 42 lesson periods, each lasting 35 and 40 minutes, respectively, per week. The language of instruction is Somali in subjects other than Arabic and Islam; English is taught as a subject from Grades 2 to 8.[9]

Secondary school education is offered for four years to pupils between the ages of 15-18, and leads to a Puntland Secondary School Certificate Examination (PSCE). Ten subjects are taught in secondary schools, namely: mathematics, physics, chemistry, biology, Somali, Arabic, Islamic studies, English, physical education, geography and history. All subjects, with the exception of physical education, are compulsory. English is the language of instruction in secondary schools, except in the Somali, Arabic, and Islamic courses. Each school week is composed of 40 periods of 45 minutes each.[10] 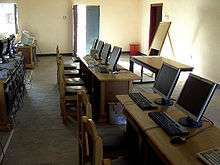 Technical/Vocational education and training (TVET) is offered at both the post-primary and post-secondary levels. The objectives of technical/vocational instruction and training at both the post-primary and post-secondary levels are to provide training opportunities for school drop outs to enable them to be productive citizens and self-supporting, to provide technical/vocational education and training that is relevant to the industrial, commercial and economic needs of Puntland, and to reduce disparities through increased training opportunities for the handicapped and learners from disadvantaged communities, as well as women.[12]

The last tier of academic instruction offered in Somalia is non-formal education (NFE), which refers to a broad set of learning opportunities that are offered to out-of-school children, youth and adults. These include vocational skills training, adult literacy, community health education, and agricultural extension activities.[13]

Qur'anic schools (also known as duqsi) remain the basic system of traditional religious instruction in Somalia. They provide Islamic education for children, thereby filling a clear religious and social role in the country. Known as the most stable local, non-formal system of education providing basic religious and moral instruction, their strength rests on community support and their use of locally made and widely available teaching materials. The Qur'anic system, which teaches the greatest number of students relative to other educational sub-sectors, is often the only system accessible to Somalis in nomadic as compared to urban areas. A study from 1993 found, among other things, that about 40% of pupils in Qur'anic schools were girls. To address shortcomings in religious instruction, the Somali government on its own part also subsequently established the Ministry of Endowment and Islamic Affairs, under which Qur'anic education is now regulated.[14]

In 2006, the autonomous Puntland region in the northeast was the second territory in Somalia after the Somaliland region to introduce free primary schools, with teachers now receiving their salaries from the Puntland administration.[15]

From 2005/2006 to 2006/2007, there was also a significant increase in the number of schools in Puntland, up 137 institutions from just one year prior. During the same period, the number of classes in the region increased by 504, with 762 more teachers also offering their services. Total student enrollment increased by 27% over the previous year, with girls lagging only slightly behind boys in attendance in most regions. The highest class enrollment was observed in the northernmost Bari region, and the lowest was observed in the under-populated Ayn region. The distribution of classrooms was almost evenly split between urban and rural areas, with marginally more pupils attending and instructors teaching classes in urban areas.[16]

Higher education in Somalia is now largely private. Several universities in the country, including Mogadishu University, have been scored among the 100 best universities in Africa, which has been hailed as a triumph for grass-roots initiatives.[17] The table below shows the level of education completed by surveyed residents of Puntland and Somalialand.[18]