Not to be confused with Somali languages.

Somali /səˈmɑːli, soʊ-/[3][4] (Af-Soomaali [æf sɔːmɑːli]) is an Afroasiatic language belonging to the Cushitic branch. It is spoken as a mother tongue by Somalis in Greater Somalia and the Somali diaspora. Somali is an official language of Somalia, a national language in Djibouti, and a working language in the Somali Region of Ethiopia. It is used as an adoptive language by a few neighboring ethnic minority groups and individuals.

Somali is classified within the Cushitic branch of the Afroasiatic family; specifically, as Lowland East Cushitic along with Afar and Saho.[5] Somali is the best-documented Cushitic language,[6] Academic studies of the language date back to the late 19th century.[7]

Somali is spoken by Somalis in Somalia, Djibouti, Ethiopia, Yemen and Kenya, and by the Somali diaspora. It is also spoken as an adoptive language by a few ethnic minority groups and individuals in these areas.

Somali is the second most widely spoken Cushitic language after Oromo.[8]

As of 2006, there were approximately 16.6 million speakers of Somali, of which around 8.3 million resided in Somalia.[9] The language is spoken by an estimated 95% of the country's inhabitants,[7] and also by a majority of the population in Djibouti.[6]

Following the start of the Somali Civil War in the early 1990s, the Somali-speaking diaspora increased in size, with newer Somali speech communities forming in parts of the Middle East, North America and Europe.[9] 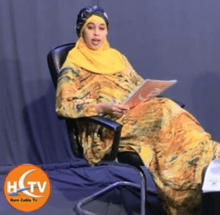 A news broadcast in Somali on Horn Cable Television.

Constitutionally, Somali and Arabic are the two official languages of Somalia.[10] Somali has been an official national language since January 1973, when the Supreme Revolutionary Council (SRC) declared it the Somali Democratic Republic's primary language of administration and education. Somali was thereafter established as the main language of academic instruction in forms 1 through 4, following preparatory work by the government-appointed Somali Language Committee. It later expanded to include all 12 forms in 1979. In 1972, the SRC adopted a Latin orthography as the official national alphabet over several other writing scripts that were then in use. Concurrently, the Italian-language daily newspaper Stella d'Ottobre was nationalized, renamed to Xiddigta Oktoobar ("The October Star"), and began publishing in Somali.[11] The state-run Radio Mogadishu has also broadcast in Somali since 1943.[12] Additionally, the regional public networks Puntland TV and Radio and Somaliland National TV, as well as Eastern Television Network and Horn Cable Television, among other private broadcasters, air programs in Somali.[13]

Somali is recognized as an official working language in the Somali Region of Ethiopia.[14] Although it is not an official language of Djibouti, it constitutes a major national language there. Somali is used in television and radio broadcasts,[7][15] with the government-operated Radio Djibouti transmitting programs in the language from 1943 onwards.[12]

The Somali language is regulated by the Regional Somali Language Academy, an intergovernmental institution established in June 2013 in Djibouti City by the governments of Djibouti, Somalia and Ethiopia. It is officially mandated with preserving the Somali language.[16]

As of 2013, Somali is also one of the featured languages available on Google Translate.[17]

Somali linguistic varieties are divided into three main groups: Northern, Benadir and Maay. Northern Somali (or Northern-Central Somali) forms the basis for Standard Somali,[18] particularly the Mudug dialect of the northern Darod clan of the Somalis. It is today spoken in an area stretching from northern Somalia to parts of the eastern and southwestern sections of the country.[19] This widespread modern distribution is a result of a long series of southward population movements over the past ten centuries from the Gulf of Aden littoral.[20] Northern Somali has frequently been used by famous Somali poets as well as the political elite, and thus has the most prestige out of the Somali dialects.[21]

Benadir (also known as Coastal Somali) is spoken on the central Indian Ocean seaboard, including Mogadishu. It forms a relatively large group. The dialect is fairly mutually intelligible with Northern Somali.[22]

Maay is principally spoken by the Digil and Mirifle (Rahanweyn or Sab) clans in the southern regions of Somalia.[18] Its speech area extends from the southwestern border with Ethiopia to a region close to the coastal strip between Mogadishu and Kismayo, including the city of Baidoa.[22] Maay is not mutually comprehensible with Northern Somali or Benadir, and it differs considerably in sentence structure and phonology.[23] It is also not generally used in education or media. However, Maay speakers often use Standard Somali as a lingua franca,[22] which is learned via mass communications, internal migration and urbanization.[23]

Maay is closely related with the Jiido, Dabarre, Garre and Tunni languages that are also spoken by smaller Rahanweyn communities. Collectively, these languages present similarities with Oromo that are not found in mainstream Somali. Chief among these is the lack of pharyngeal sounds in the Rahanweyn/Digil and Mirifle languages, features which by contrast typify Somali. Although in the past frequently classified as dialects of Somali, more recent research by the linguist Mohamed Diriye Abdullahi has shown that these varieties, including Maay, constitute separate Cushitic languages. They may thus represent traces of an Oromo substratum in the southern Rahanweyn confederacy.[24]

The consonants /b d̪ q/ often weaken to [β ð ɣ] intervocalically.[28] The retroflex plosive /ɖ/ may have an implosive quality for some speakers, and intervocalically it can be realized as the flap [ɽ].[28] Some speakers produce /ħ/ with epiglottal trilling.[29] /q/ is often epiglottalized.[30]

The language has five basic vowels. Each has a front and back variation as well as long or short versions. This gives a distinct 20 pure vowel sounds. It also exhibits three tones: high, low and falling.

The syllable structure of Somali is (C)V(C). Root morphemes usually have a mono- or di-syllabic structure.

Somali is an agglutinative language, and also shows properties of inflection. Affixes mark many grammatical meanings, including aspect, tense and case.[33]

Somali evinces an old prefixal verbal inflection restricted to four common verbs, with all other verbs undergoing inflection by more obvious suffixation. This general pattern is similar to the stem alternation that typifies Cairene Arabic.[34]

Changes in pitch are used for grammatical rather than lexical purposes.[35] This includes distinctions of gender, number and case.[35] In some cases, these distinctions are marked by tone alone (e.g. Ínan, "boy"; inán, "girl").[36]

Somali has two sets of pronouns: independent (substantive, emphatic) pronouns and clitic (verbal) pronouns.[37] The independent pronouns behave grammatically as nouns, and normally occur with the suffixed article -ka/-ta (e.g. adiga, "you").[37] This article may be omitted after a conjunction or focus word. For example, adna meaning "and you..." (from adi-na).[37] Clitic pronouns are attached to the verb and do not take nominal morphology.[38] Somali marks clusivity in the first person plural pronouns; this is also found in a number of other East Cushitic languages, such as Rendille and Dhaasanac.[39]

As in various other Afro-Asiatic languages, Somali has gender polarity whereby plural nouns usually take the opposite gender agreement of their singular forms.[40][41] For example, the plural of the masculine noun dibi ("bull") is formed by converting it into feminine dibi.[40] Somali is unusual among the world's languages in that the object is unmarked for case while the subject is marked, though this feature is found in other Cushitic languages such as Oromo.[42]

Somali is a subject–object–verb (SOV) language.[9] It is largely head final, with postpositions and with obliques preceding verbs.[43] These are common features of the Cushitic and Semitic Afroasiatic languages spoken in the Horn region (e.g. Amharic).[44] However, Somali noun phrases are head-initial, whereby the noun precedes its modifying adjective.[43][45] This pattern of general head-finality with head-initial noun phrases is also found in other Cushitic languages (e.g. Oromo), but not generally in Ethiopian Semitic languages.[43][46] 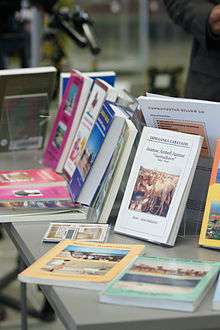 Somali loanwords can be divided into those derived from other Afroasiatic languages (mainly Arabic), and those of Indo-European extraction.[49]

Somali's main lexical borrowings come from Arabic, and are estimated to constitute about 20% of the language's vocabulary.[50] This is a legacy of the Somali people's extensive social, cultural, commercial and religious links and contacts with nearby populations in the Arabian peninsula. Arabic loanwords are most commonly used in religious, administrative and education-related speech (e.g. aamiin for "faith in God"), though they are also present in other areas (e.g. kubbad-da, "ball").[49] Soravia (1994) noted a total of 1,436 Arabic loanwords in Agostini a.o. 1985,[51] a prominent 40,000-entry Somali dictionary.[21] Most of the terms consisted of commonly used nouns. These lexical borrowings may have been more extensive in the past since a few words that Zaborski (1967:122) observed in the older literature were absent in Agostini's later work.[51] In addition, the majority of personal names are derived from Arabic.[52]

The Somali language also contains a few Indo-European loanwords that were retained from the colonial period.[11] Most of these lexical borrowings come from English and are used to describe new objects or concepts (e.g. telefishen-ka, "television"; raadia-ha, "radio").[53] There are as well some Romance loans, such as garawati for "tie" (from the Italian cravatta), and bilyeti-ga for "ticket" (from the French billet).[53]

Additionally, Somali contains lexical terms from Persian, Urdu and Hindi that were acquired through historical trade with communities in the Near East and South Asia (e.g. khiyaar "cucumber" from Persian: خيار‎‎ khiyār).[53] Some of these words were also borrowed indirectly via Arabic.[53][54]

As part of a broader governmental effort to ensure and safeguard the primacy of the Somali language, the past few decades has seen a push in Somalia toward replacement of loanwords in general with their Somali equivalents or neologisms. To this end, the Supreme Revolutionary Council during its tenure officially prohibited the borrowing and use of English and Italian terms.[11] 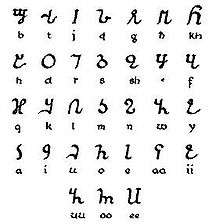 The Osmanya writing script for Somali.

Archaeological excavations and research in Somalia uncovered ancient inscriptions in a distinct writing system.[55] In an 1878 report to the Royal Geographical Society of Great Britain, scientist Johann Maria Hildebrandt noted upon visiting the area that "we know from ancient authors that these districts, at present so desert, were formerly populous and civilised[...] I also discovered ancient ruins and rock-inscriptions both in pictures and characters[...] These have hitherto not been deciphered."[56] According to Somalia's Ministry of Information and National Guidance, this script represents the earliest written attestation of Somali.[55]

Besides Ahmed's Latin script, other orthographies that have been used for centuries for writing Somali include the long-established Arabic script and Wadaad writing.[57] According to Bogumil Andrzejewski, this usage was limited to Somali clerics and their associates, as sheikhs preferred to write in the liturgical Arabic language. Various such historical manuscripts in Somali nonetheless exist, which mainly consist of Islamic poems (qasidas), recitations and chants.[58] Among these texts are the Somali poems by Sheikh Uways and Sheikh Ismaaciil Faarah. The rest of the existing historical literature in Somali principally consists of translations of documents from Arabic.[59]

Since then a number of writing systems have been used for transcribing the Somali language. Of these, the Somali Latin alphabet, officially adopted in 1972, is the most widely used.[60] The script was developed by the Somali linguist Shire Jama Ahmed specifically for the Somali language, and uses all letters of the English Latin alphabet except p, v and z. There are no diacritics or other special characters except the use of the apostrophe for the glottal stop, which does not occur word-initially. There are three consonant digraphs: DH, KH and SH. Tone is not marked, and front and back vowels are not distinguished.

Writing systems developed in the twentieth century include the Osmanya, Borama and Kaddare alphabets, which were invented by Osman Yusuf Kenadid, Abdurahman Sheikh Nuur and Hussein Sheikh Ahmed Kaddare, respectively.[61]

Days of the week