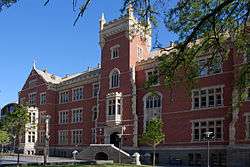 Before starting school, children attend child care, or kindergarten (pre school). This is typically between the ages of three to five.

In South Australia it is compulsory for children to be enrolled school by their sixth birthday. All people under the age of 17 are required to participate in full-time schooling, training or work for at least 25 hours per week.[1] Under the Education Act of South Australia, parents and guardians are responsible for the regular attendance of all children in their care between the ages of 6 and 16 years.[2]

The public universities also have other campuses in the metropolitan area, around the state, inter-state and overseas.

Rural and regional campuses include:

Flinders:[3] The university maintains a number of external teaching partnerships in south-west Victoria and the Northern Territory.

Carnegie Mellon University's Heinz College Australia[7] and ETC-Australia (Entertainment Technology Center – Australia Global Initiative)[8] (sic – American spelling) both have campuses in Adelaide. The Heinz College, in Victoria Square, was established in 2006, and is the first American university to open a campus in Australia.[9] ETC-Australia is located on Light Square.

CMU-Australia is co-located with the University College London's School of Energy and Resources (Australia), and world-class research and policy institutes, including Cranfield University (UK), partner the Torrens Resilience Institute and the Australian Centre for Social Innovation.[9]