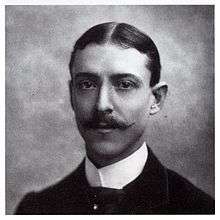 Edward Denny Bacon in around 1900.

Sir Edward Denny Bacon, KCVO (29 August 1860 – 5 June 1938)[1] was a British philatelist who helped the enlargement and mounting of collections possessed by rich collectors of his time[2] and became the curator of the Royal Philatelic Collection between 1913 and 1938.

Edward Bacon was the son of a malt producer of London, where he worked until it closed in 1895.

After 1895 he decided then to become a full-time philatelist.[2] His two main collections were of Japanese stamps (that became Philipp von Ferrary's) and of postal stationery (later Thomas Tapling's).

He joined the Philatelic Society, London in 1880, in which he served in every possible main post.[2] He was elected President in 1917.[3]

He was known to help some British collectors to manage their philatelic possessions. The first one was Thomas Keay Tapling; when Tapling bequeathed his collection to the British Museum, Bacon mounted the ensemble and wrote its description, a task he achieved for an exhibition in February 1897,[4] after Tapling's death in 1891.[2] After that, he managed Henry J. Duveen's collection, and published in 1911 the catalogue of the Crawford Library.[5] In 1907 Bacon was the first President of the Philatelic Literature Society.[6] Bacon was also a member of the Fiscal Philatelic Society.

A week after John Alexander Tilleard, "Philatelist to the King",[7] died in September 1913, Bacon was invited by King George V to be the Curator of the Royal Philatelic Collection.[2] He accepted and travelled from his residence in Croydon to Buckingham Palace two or three times a week until his death to work on the collection, to buy stamps, to receive items from the post offices in the United Kingdom, and the British Dominions and colonies, and to mount all this in uniform red stamp albums,[8] while Tilleard had accumulated and mounted only when the King was preparing an exhibition at the Royal Philatelic Society London. Nevertheless, John Wilson, Keeper of the Collection after Bacon's death, criticised the way Bacon added new hinges without removing old ones.[9]

Whereas deafness[10] isolated Bacon from the others members of the Royal Court, he alone succeeded in balancing the collection's budget when the King bought a lot and to mount every project, essay and issued stamp received. During World War I, the session in the Stamp Room placed inside Buckingham Palace diverted the King from matters of state and the war, and made him consider the curator as a friend like Tilleard.[11]

After George V's death in January 1936, Bacon continued his tasks on a collection that became part of the royal heritage. Even if Kings Edward VIII and George VI were less enthusiastic stamp collectors than their father, they made sure that all British and colonial postal authorities continued to send philatelic material to the Curator.[12] But Edward VIII ordered that the collection had to be financially self-sufficient, thanks to the sales of duplicate stamps. In July 1936 Bacon was authorised to sell two 500-dollar stamps of the Straits Settlements featuring King Edward VII for 1,000 pounds.[13]

In April 1938 Bacon announced to the King his retirement on the next first of September. John Wilson was quickly chosen because, as President of the Royal Philatelic Society London and chairman of its Expert Committee, he already knew the collection well.[14] However, Bacon died of an illness in June 1938.[15] From 1904 until his death, he lived in Croydon, commuting to work at Buckingham Palace. https://www.youtube.com/watch?v=K5trF1m2m6s

In 1906 he received the first Lindenberg Medal[1] from the Berliner Philatelisten-Klub[17] and was amongst the first to sign the Roll of Distinguished Philatelists with King George V.[1]