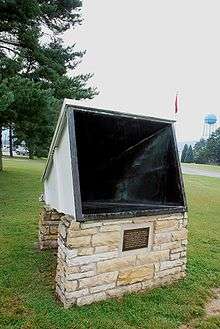 Horn antenna used by Harold I. Ewen and Edward M. Purcell at the Lyman Laboratory of Physics at Harvard University in 1951 for the first detection of radio radiation from nuclear atomic hydrogen gas in the Milky Way at a wavelength of 21 cm. Now at National Radio Astronomy Observatory in Green Bank, WV.[1]

Edward Mills Purcell (August 30, 1912 – March 7, 1997) was an American physicist who shared the 1952 Nobel Prize for Physics for his independent discovery (published 1946) of nuclear magnetic resonance in liquids and in solids.[2] Nuclear magnetic resonance (NMR) has become widely used to study the molecular structure of pure materials and the composition of mixtures.

Born and raised in Taylorville, Illinois, Purcell received his BSEE in electrical engineering from Purdue University, followed by his M.A. and Ph.D. in physics from Harvard University. He was a member of the Alpha Xi chapter of the Phi Kappa Sigma Fraternity while at Purdue.[3] After spending the years of World War II working at the MIT Radiation Laboratory on the development of microwave radar, Purcell returned to Harvard to do research. In December 1946, he discovered nuclear magnetic resonance (NMR) with his colleagues Robert Pound and Henry Torrey.[4] NMR provides scientists with an elegant and precise way of determining chemical structure and properties of materials, and is widely used in physics and chemistry. It also is the basis of magnetic resonance imaging (MRI), one of the most important medical advances of the 20th century. For his discovery of NMR, Purcell shared the 1952 Nobel Prize in physics with Felix Bloch of Stanford University.

Purcell also made contributions to astronomy as the first to detect radio emissions from neutral galactic hydrogen (the famous 21 cm line due to hyperfine splitting), affording the first views of the spiral arms of the Milky Way.[5] This observation helped launch the field of radio astronomy, and measurements of the 21 cm line are still an important technique in modern astronomy. He has also made seminal contributions to solid state physics, with studies of spin-echo relaxation, nuclear magnetic relaxation, and negative spin temperature (important in the development of the laser). With Norman F. Ramsey, he was the first to question the CP symmetry of particle physics.

Purcell was the recipient of many awards for his scientific, educational, and civic work. He served as science advisor to Presidents Dwight D. Eisenhower, John F. Kennedy, and Lyndon B. Johnson. He was president of the American Physical Society, and a member of the American Philosophical Society, the National Academy of Sciences, and the American Academy of Arts and Sciences. He was awarded the National Medal of Science in 1979, and the Jansky Lectureship before the National Radio Astronomy Observatory. Purcell was also inducted into his Fraternity's (Phi Kappa Sigma) Hall of Fame as the first Phi Kap ever to receive a Nobel Prize.

Purcell was the author of the innovative introductory text Electricity and Magnetism.[6] The book, a Sputnik-era project funded by an NSF grant, was influential for its use of relativity in the presentation of the subject at this level. The 1965 edition, now freely available due to a condition of the federal grant, was originally published as a volume of the Berkeley Physics Course. Half a century later, the book is also in print as a commercial third edition, as Purcell and Morin. Purcell is also remembered by biologists for his famous lecture "Life at Low Reynolds Number",[7] in which he explained a principle referred to as the Scallop theorem.