This article is about the long fish. For other uses, see Eel (disambiguation).
"Eels" redirects here. For the band, see Eels (band).

The European conger is the heaviest of all eels

An eel is any fish belonging to the order Anguilliformes (/æŋˌɡwɪlᵻˈfɔːrmiːz/), which consists of four suborders, 20 families, 111 genera and about 800 species. Most eels are predators. The term "eel" (originally referring to the European eel) is also used for some other similarly shaped fish, such as electric eels and spiny eels, but these are not members of the Anguilliformes order.

Most eels live in the shallow waters of the ocean and burrow into sand, mud, or amongst rocks. A majority of eel species are nocturnal, thus are rarely seen. Sometimes, they are seen living together in holes, or "eel pits". Some species of eels also live in deeper water on the continental shelves and over the slopes deep as 4,000 m (13,000 ft). Only members of the Anguilla regularly inhabit fresh water, but they, too, return to the sea to breed.[4] 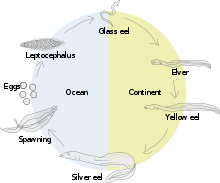 Eels begin life as flat and transparent larvae, called leptocephali. Eel larvae drift in the surface waters of the sea, feeding on marine snow, small particles that float in the water. Eel larvae then metamorphose into glass eels and then become elvers before finally seeking out their juvenile and adult habitats.[2] Freshwater elvers travel upstream and are forced to climb up obstructions, such as weirs, dam walls, and natural waterfalls. Lady Colin Campbell found, at Ballisodare, the eel fisheries were greatly improved by the hanging of loosely plaited grass ladders over barriers, enabling the elvers to ascend.[7]

This classification follows FishBase in dividing the eels into 20 families. Additional families included in other classifications (notably ITIS and Systema Naturae 2000) are noted below the family with which they are synomized in the Fish Base system.

Identifying the origin of the freshwater species has been problematic. Genomic studies indicate they are a monophyletic group which originated among the deep-sea eels.[8] 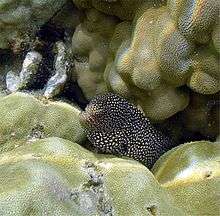 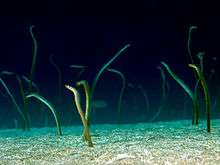 The electric eel of South America is not a true eel, but is a South American knifefish more closely related to the carps and catfishes. 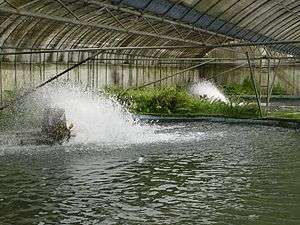 Freshwater eels (unagi) and marine eels (conger eel, anago) are commonly used in Japanese cuisine; foods such as unadon and unajū are popular, but expensive. Eels are also very popular in Chinese cuisine, and are prepared in many different ways. Hong Kong eel prices have often reached 1000 HKD (128.86 US Dollars) per kg, and once exceeded 5000 HKD per kg. The European eel and other freshwater eels are eaten in Europe, the United States, and other places. A traditional east London food is jellied eels, although the demand has significantly declined since World War II. The Basque delicacy angulas consists of elver (young eels) sautéed in olive oil with garlic; elvers usually reach prices of up to 1000 euro per kg.[20] New Zealand longfin eel is a traditional Māori food in New Zealand. In Italian cuisine, eels from the Valli di Comacchio, a swampy zone along the Adriatic coast, are especially prized, along with freshwater eels of Bolsena Lake and pond eels from Cabras, Sardinia. In northern Germany, the Netherlands, the Czech Republic, Poland, Denmark, and Sweden, smoked eel is considered a delicacy.

Elvers, often fried, used to be a cheap dish in the United Kingdom; but, during the 1990s, their numbers collapsed across Europe.[21] They are now not just a delicacy, but the UK's most expensive species.[22]

Eels, particularly the moray eel, are popular among marine aquarists.

Eel blood is toxic to humans[23] and other mammals,[24][25][26] but both cooking and the digestive process destroy the toxic protein. The toxin derived from eel blood serum was used by Charles Robert Richet in his Nobel Prize-winning research which discovered anaphylaxis (by injecting it into dogs and observing the effect). The poison used by Richet was actually obtained from sea anemones.[27]

Eelskin leather is highly prized. It is very smooth and exceptionally strong. However, it does not come from eels. It comes from the Pacific hagfish, a jawless fish which is also known as the slime eel.[28][29]

A famous attraction on the French Polynesian island of Huahine (part of the Society Islands) is the bridge across a stream hosting 3- to 6-ft-long eels, deemed sacred by local culture.

In 2010, Greenpeace International has added the European eel, Japanese eel, and American eel to its seafood red list.[30] Japan consumes more than 70% of the global eel catch.[31]

The English name "eel" descends from Old English ǽl, Common Germanic *ǣlaz. Also from the common Germanic are German Aal, Middle Dutch ael, Old High German âl, and Old Norse áll. Katz (1998) identifies a number of Indo-European cognates, among them the second part of the Latin word for eels, anguilla, attested in its simplex form illa (in a glossary only), and the Greek word for "eel", egkhelys (the second part of which is attested in Hesychius as elyes).[32] The first compound member, anguis ("snake"), is cognate to other Indo-European words for "snake" (compare Old Irish escung "eel", Old High German unc "snake", Lithuanian angìs, Greek ophis, okhis, Vedic Sanskrit áhi, Avestan aži, Armenian auj, iž, Old Church Slavonic *ǫžь, all from Proto-Indo-European *oguhis, ēguhis). The word also appears in the Old English word for "hedgehog," which is igil (meaning "snake eater"), and perhaps in the egi- of Old High German egidehsa "wall lizard". According to this theory, the name Bellerophon (Βελλεροφόντης, attested in a variant Ἐλλεροφόντης in Eustathius of Thessalonica), is also related, translating to "the slayer of the serpent" (ahihán). On this theory, the ελλερο- is an adjective form of an older word, ελλυ, meaning "snake", which is directly comparable to Hittite ellu-essar- "snake pit". This myth likely came to Greece via Anatolia. In the Hittite version of the myth, the dragon is called Illuyanka: the illuy- part is cognate to the word illa, and the -anka part is cognate to angu, a word for "snake". Since the words for "snake" (and similarly shaped animals) are often subject to taboo in many Indo-European (and non-Indo-European) languages, no unambiguous Proto-Indo-European form of the word for eel can be reconstructed. It may have been *ēl(l)-u-, *ēl(l)-o-, or something similar.

The daylight passage in the spring of elvers upstream along the Thames was at one time called "eel fare". The word 'elver' is thought to be a corruption of "eel fare."[7]