A two-franc World War II emergency-issue banknote (1943), printed in Papeete, and depicting the outline of Tahiti on the reverse.

French Polynesia is divided into five groups of islands: The Society Islands archipelago composed of the Windward Islands and the Leeward Islands, the Tuamotu Archipelago, the Gambier Islands, the Marquesas Islands and the Austral Islands. Among its 118 islands and atolls, 67 are inhabited. Tahiti, which is located within the Society Islands, is the most populous island and the seat of the capital of the collectivity, Pape'ete. It has more than 68% of the population of the islands in 2012. Although not an integral part of its territory, Clipperton Island was administered from French Polynesia until 2007. 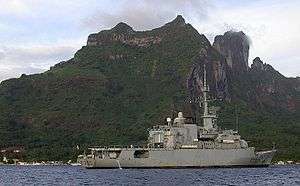 French Polynesia as we know it today was one of the last places on Earth to be settled by humans. Scientists believe the Great Polynesian Migration happened around 1500 BC as Austronesian people went on a journey using celestial navigation to find islands in the South Pacific Ocean. The first islands of French Polynesia to be settled were the Marquesas Islands in about 200 BC. The Polynesians later ventured southwest and discovered the Society Islands around AD 300.[7]

European communication began in 1521 when Portuguese explorer Ferdinand Magellan, sailing in the service of the Spanish Crown, sighted Puka-Puka in the Tuāmotu-Gambier Archipelago. In 1772, Dutchman Jakob Roggeveen came across Bora Bora in the Society Islands.

British explorer Samuel Wallis visited Tahiti in 1767. The French explorer Louis Antoine de Bougainville visited Tahiti in 1768, while the British explorer James Cook visited in 1769.[7] In 1772, The Spanish Viceroy of Peru Don Manuel de Amat ordered a number of expeditions to Tahiti under the command of Domingo de Bonechea who was the first European to explore all of the main islands beyond Tahiti.[8] A short-lived Spanish settlement was created in 1774,[7] and for a time some maps bore the name Isla de Amat after Viceroy Amat.[9] Christian missions began with Spanish priests who stayed in Tahiti for a year. Protestants from the London Missionary Society settled permanently in Polynesia in 1797.

King Pōmare II of Tahiti was forced to flee to Mo'orea in 1803; he and his subjects were converted to Protestantism in 1812. French Catholic missionaries arrived on Tahiti in 1834; their expulsion in 1836 caused France to send a gunboat in 1838. In 1842, Tahiti and Tahuata were declared a French protectorate, to allow Catholic missionaries to work undisturbed. The capital of Papeetē was founded in 1843. In 1880, France annexed Tahiti, changing the status from that of a protectorate to that of a colony. The island groups were not officially united until the establishment of the French protectorate in 1889.[10]

In the 1880s, France claimed the Tuamotu Archipelago, which formerly belonged to the Pōmare Dynasty, without formally annexing it. Having declared a protectorate over Tahuata in 1842, the French regarded the entire Marquesas Islands as French. In 1885, France appointed a governor and established a general council, thus giving it the proper administration for a colony. The islands of Rimatara and Rūrutu unsuccessfully lobbied for British protection in 1888, so in 1889 they were annexed by France. Postage stamps were first issued in the colony in 1892. The first official name for the colony was Établissements de l'Océanie (Establishments in Oceania); in 1903 the general council was changed to an advisory council and the colony's name was changed to Établissements Français de l'Océanie (French Establishments in Oceania).[11]

In 1940, the administration of French Polynesia recognised the Free French Forces and many Polynesians served in World War II. Unknown at the time to the French and Polynesians, the Konoe Cabinet in Imperial Japan on 16 September 1940 included French Polynesia among the many territories which were to become Japanese possessions, as part of the "Eastern Pacific Government-General" in the post-war world.[12] However, in the course of the war in the Pacific the Japanese were not able to launch an actual invasion of the French islands.

In 1946, Polynesians were granted French citizenship and the islands' status was changed to an overseas territory; the islands' name was changed in 1957 to Polynésie Française (French Polynesia). In 1962, France's early nuclear testing ground of Algeria became independent and the Moruroa atoll in the Tuamotu Archipelago was selected as the new testing site; tests were conducted underground after 1974.[13] In 1977, French Polynesia was granted partial internal autonomy; in 1984, the autonomy was extended. French Polynesia became a full overseas collectivity of France in 2003.[14]

In September 1995, France stirred up widespread protests by resuming nuclear testing at Fangataufa atoll after a three-year moratorium. The last test was on 27 January 1996. On 29 January 1996, France announced that it would accede to the Comprehensive Test Ban Treaty, and no longer test nuclear weapons.[15] 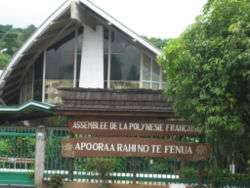 The Assembly of French Polynesia.

At the French municipal elections held in March 2008, several prominent mayors who are member of the Flosse-Temaru coalition lost their offices in key municipalities of French Polynesia, which was interpreted as a disapproval of the way Gaston Tong Sang, whose party French Polynesian voters had placed first in the territorial elections the month before, had been prevented from becoming president of French Polynesia by the last minute alliance between Flosse and Temaru's parties. Eventually, on 15 April 2008 the government of Gaston Flosse was toppled by a constructive vote of no confidence in the territorial assembly when two members of the Flosse-Temaru coalition left the coalition and sided with Tong Sang's party. Gaston Tong Sang was elected president of French Polynesia as a result of this constructive vote of no confidence, but his majority in the territorial assembly is very narrow. He offered posts in his cabinet to Flosse and Temaru's parties which they both refused. Gaston Tong Sang has called all parties to help end the instability in local politics, a prerequisite to attract foreign investors needed to develop the local economy.

Despite a local assembly and government, French Polynesia is not in a free association with France, like the Cook Islands with New Zealand. As a French overseas collectivity, the local government has no competence in justice, university education, security and defense. Services in these areas are directly provided and administered by the Government of France, including the National Gendarmerie (which also polices rural and border areas in European France), and French military forces. The collectivity government retains control over primary and secondary education, health, town planning, and the environment.[18] The highest representative of the State in the territory is the High Commissioner of the Republic in French Polynesia (French: Haut commissaire de la République).

French Polynesians vote in the French presidential elections and at the 2007 French presidential election, in which the pro-independence leader Oscar Temaru openly called to vote for the Socialist candidate Ségolène Royal while the parties opposed to independence generally supported the center-right candidate Nicolas Sarkozy, the turnout in French Polynesia was 69.12% in the first round of the election and 74.67% in the second round in favour of Nicolas Sarkozy ahead in both rounds of the election expressing their will to remain in the French Republic. (versus in Metropolitan France in the 2nd round: Nicolas Sarkozy 51.9%; Ségolène Royal 48.1%).[19] 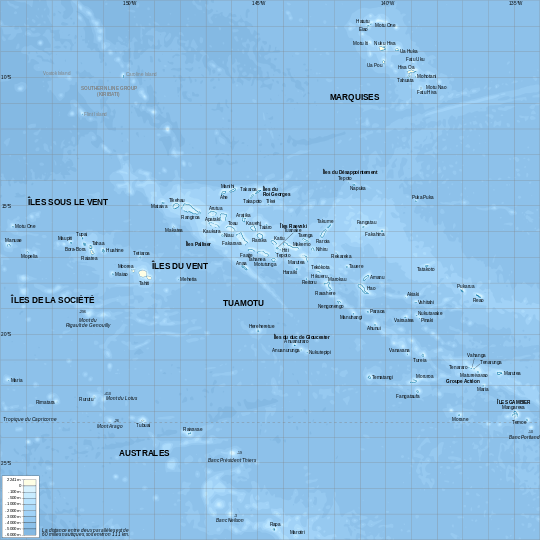 It is made up of six archipelagos. The largest and most populated island is Tahiti, in the Society Islands.

Tourism is an important source of income for French Polynesia

The legal tender of French Polynesia is the CFP Franc which has a fixed exchange rate with the Euro. The nominal gross domestic product (or GDP) of French Polynesia in 2014 was 5.623 billion US dollars at market local prices, the sixth-largest economy in Oceania after Australia, New Zealand, Hawaii, New Caledonia, and Papua New Guinea.[5] The GDP per capita was $20,981 in 2014 (at market exchange rates, not at PPP), lower than in Hawaii, Australia, New Zealand, and New Caledonia, but higher than all the independent insular states of Oceania. Both per capita and total figures were significantly lower than those recorded before the financial crisis of 2007–08.[5]

French Polynesia has a moderately developed economy, which is dependent on imported goods, tourism, and the financial assistance of mainland France. Tourist facilities are well developed and are available on the major islands. Main agricultural productions are coconuts (copra), vegetables and fruits. French Polynesia exports noni juice, a high quality vanilla, and the famous black Tahitian pearls which accounted for 55% of exports (in value) in 2008.[20]

French Polynesia's seafloor contains rich deposits of nickel, cobalt, manganese, and copper that are not exploited. 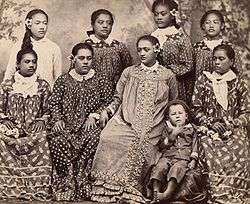 Chinese, Demis, and the white populace are essentially concentrated on the island of Tahiti, particularly in the urban area of Papeetē, where their share of the population is thus much greater than in French Polynesia overall.[1] Despite a long history of ethnic mixing, ethnic tensions have been growing in recent years, with politicians using a xenophobic discourse and fanning the flame of nationalism.[22][23]

Christianity is the main religion of the islands.

A majority of 54% belongs to various Protestant churches. The Maói Protestant Church is the largest Protestant denomination, accounting for more than 50% of the population.[29] It traces its origins to Pomare II, the king of Tahiti, who converted from traditional beliefs to the Reformed tradition brought to the islands by the London Missionary Society. Roman Catholics constitute a large minority with 30% of the population. The Church of Jesus Christ of Latter-day Saints had 21,884 members as of 2012.[30] There were about 3,000 Jehovah's Witnesses in Tahiti as of 2014.[31]

The Polynesian traditional sport va'a is practiced in all the islands. French Polynesia hosts the Hawaiki nui va'a an international race between Tahiti, Huahine and Bora Bora.

French Polynesia is famous for its reef break waves. Teahupo'o is probably the most renowned, regularly ranked in the best waves of the world.[32] This site hosts the annual Billabong Pro Tahiti surf competition, the 7th stop of the World Championship Tour.

There are many spots to practice kitesurfing in French Polynesia. Tahiti, Moorea, Bora-Bora, Maupiti and Raivavae are the most iconic spots.[33]

French Polynesia is internationally known for diving. Each archipelago offers opportunities for divers. Rangiroa and Fakarava in the The Tuamotu islands are the most famous spots in the area.[34] 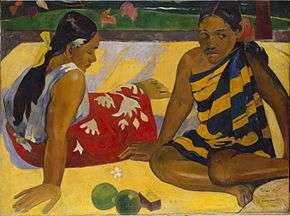 Painting of Two Women of Tahiti by Paul Gauguin

French Polynesia came to the forefront of the world music scene in 1992, with the release of The Tahitian Choir's recordings of unaccompanied vocal Christian music called himene tārava, recorded by French musicologist Pascal Nabet-Meyer. This form of singing is common in French Polynesia and the Cook Islands, and is distinguished by a unique drop in pitch at the end of the phrases, which is a characteristic formed by several different voices; it is also accompanied by steady grunting of staccato, nonsensical syllables.