Effect of taxes and subsidies on price

Taxes and subsidies change the price of goods and, as a result, the quantity consumed.

Marginal subsidies on production will shift the supply curve to the right until the vertical distance between the two supply curves is equal to the per unit subsidy; when other things remain equal, this will decrease price paid by the consumers (which is equal to the new market price) and increase the price received by the producers. Similarly, a marginal subsidy on consumption will shift the demand curve to the right; when other things remain equal, this will decrease the price paid by consumers and increase the price received by producers by the same amount as if the subsidy had been granted to producers. However, in this case, the new market price will be the price received by producers. The end result is that the lower price that consumers pay and the higher price that producers receive will be the same, regardless of how the subsidy is administered.[1] 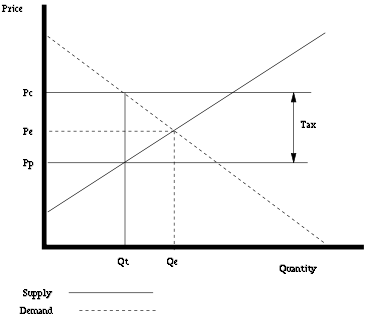